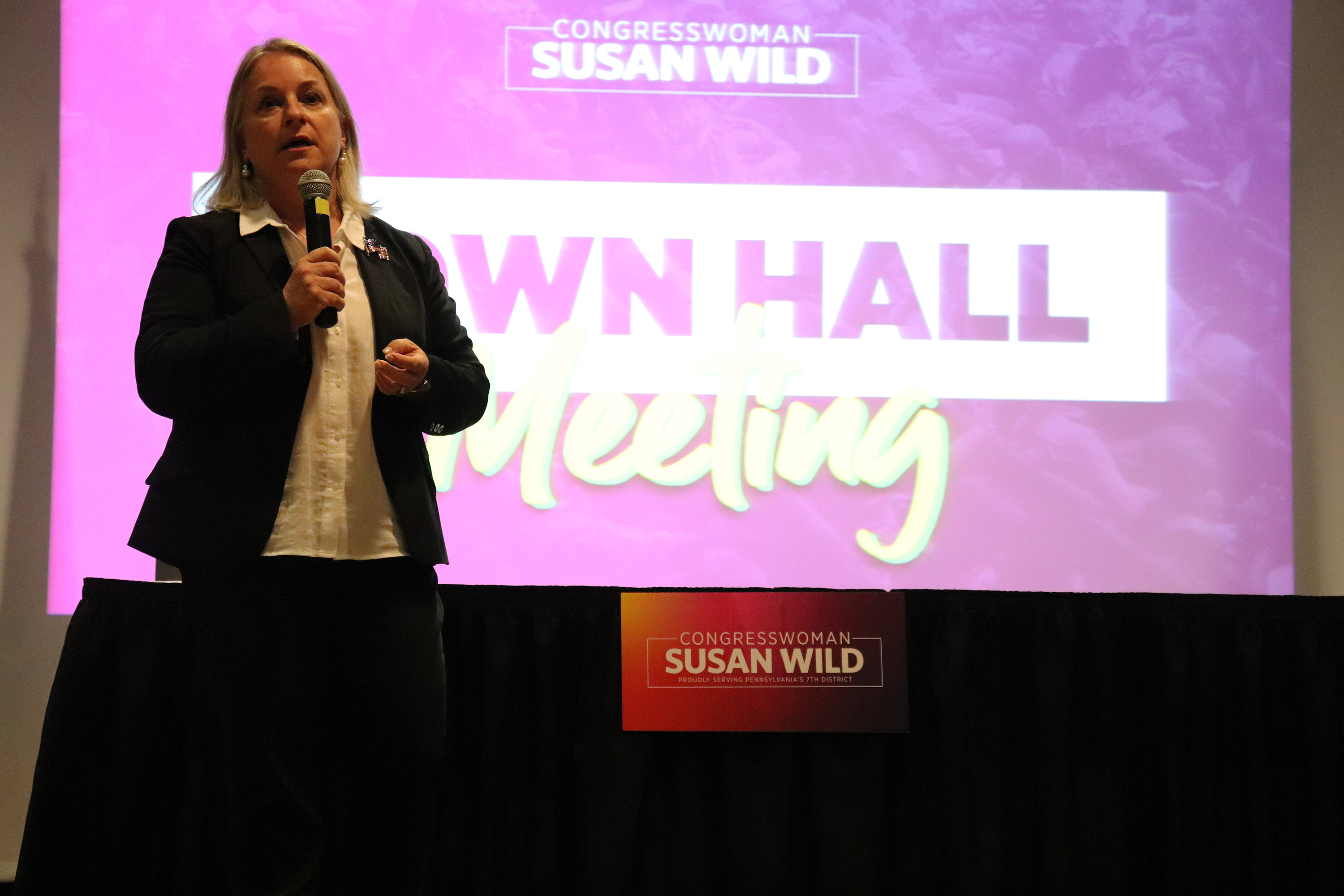 On Oct. 2, Representative Susan Wild held a town hall in the Seegers Union event space, drawing huge crowds of lively constituents (cheering and booing was present throughout), Muhlenberg students and national news media. Following the Sept. 24 announcement that House Democrats would be pursuing an impeachment inquiry against President Trump, Wild’s position as a more moderate Democrat in a ‘purple’ district made the town hall a focus for news outlets looking for her position on impeachment. However, her constituents made clear through their questions that paramount to impeachment hearings were issues like climate change, mental health, public school funding and health insurance access.

Wild began the meeting by stating her current concerns and plans for creating policy relevant to her district and explained how her seat on the Education and Labor Committee would be directly relevant to her constituents’ needs.

“When I ran for this seat, what I pledged to do, and I think I’m fulfilling the promise, was to work on issues [t]hat I call the kitchen table, pocketbook issues that matter to the working people in this district, that matter to senior citizens, retirees, people who want to be employed but perhaps aren’t able to be because they’re disabled or have some other disadvantage,” explained Wild. “Those are the things that I spend the vast majority of my time on when I’m in Washington…My very first [committee] choice was Education and Labor, and [it’s] because it’s the perfect intersection for what is most needed in this district.”

One of the first questions at the meeting concerned mental healthcare and the costs of health insurance coverage. Wild has made mental health a focus of her policymaking following her partner’s suicide in May.

“I do think we are not doing a very good job in this country of treating mental health issues the same way we treat physical health issues,” Wild explained. “I would like to see us get to the point where everybody who needs health care gets it. Health care is a right, it is not a privilege.”

Another central issue brought up by constituents was funding inequality in Pennsylvania, and specifically in Allentown public schools. Val Weisler ‘20 shared her experience working with Allentown high school students and described the inequality she witnessed firsthand there.

“I lead the college admissions mentoring program at William Allen High School and through working with these students I’ve learned that while Parkland High School students receive school busing because they’re constituted as a suburban district, William Allen students do not because they’re considered an urban district,” explained Weisler to Wild. “So the majority of these students are shelling out 60 dollars a month to pay for the public bus to get to school or they are walking 45 minutes from the south side of Allentown at 6:00 a.m. to be able to get there, or because it’s not safe, they’re simply not going to school, which is causing a chronic absenteeism epidemic in this program. The students don’t have 60 dollars a month. They’re so much below the poverty line that 100 percent of students at William Allen are receiving free lunch, and that’s causing a children’s rights issue.”

Wild explained that although she is working on improving public school funding with the Education and Labor Committee, she stated that the specific busing issue Weisler brought up is not something she can solve directly.

“I don’t think it’s as much the suburban/urban distinction as [it] is the property tax base. Parkland has a property tax base to afford a lot of nice things including busing. Allentown does not… If you added the cost of busing to the Allentown School District’s budget, it would implode…So it again comes back to fair funding,” said Wild. “Unfortunately, much of the education budget is allocated through the states, but at the federal level we can create more funding sources that get passed on to the school districts. We aren’t in charge of how the school districts spend their money. That’s left up to individual school districts in the state.”

Weisler was not satisfied with the congresswoman’s answer.

“Susan Wild sits on the Education and Labor Committee,” said Weisler. “She preached at the beginning of the meeting that she believes in solving ‘kitchen table issues.’ I recognize that this is a systemic issue, but it’s affecting kids a few blocks away. I wish Rep. Wild had responded with any interest of at least having a conversation about this.”

“Mental health problems do not start at age 18. They generally develop earlier in life. I’m a big believer that we should be doing baseline mental health evaluations in the schools the same way we require students to have their vaccinations before they come to school,”

Bringing together two of Wild’s central stated policy concerns, the congresswoman later addressed a question about the scarcity of mental health resources in public schools and how the lack of mental illness treatment affects the learning environment for all students.

“I don’t believe it should be the job of a teacher to be a mental health counselor disciplinarian and the numerous other things that teachers are now called upon to do,” said Wild. “Mental health problems do not start at age 18. They generally develop earlier in life. I’m a big believer that we should be doing baseline mental health evaluations in the schools the same way we require students to have their vaccinations before they come to school… [to] make sure that [mental health] is being addressed in some way and that these students aren’t just being treated as as troublemakers in the schools.”

Early in the meeting, it was clear that climate change was a foremost issue among the audience. Maura O’Reilly ‘20 asked Wild if she would sign on to the Green New Deal (GND) legislation in light of more urgent climate change warnings from the Intergovernmental Panel on Climate Change (IPCC).

“I think the Green New Deal is a wonderful statement of aspiration and goals. I have not signed onto it. I have, however, worked very very hard in the climate change space,” explained Wild, before stating the climate change initiatives and legislation that she has supported and signed on to. “Here’s my problem with the Green New Deal: It hasn’t advanced any specific legislation…what I want is to see things done.”

While O’Reilly felt her question was addressed adequately, she expressed disappointment that the congresswoman has not changed her stance on the GND since holding her town halls in previous months.

“I was hoping that she would answer differently given the newest IPCC reports and pressure from young people worldwide surrounding the GND and the climate crisis that has happened in the six months since her last town hall,” said O’ Reilley. “Our generation is relying on the GND to ensure an environmentally safe and equitable future. By asking my question, I hoped to keep the pressure on her regarding the climate crisis and to show that we haven’t forgotten her lack of support for the GND, the only tangible and equitable piece of legislation on the table.”

“We’ve got pharmaceutical executives who are making millions of dollars a year,” said Wild. “We’ve got corporate executives who are making [a] hundred and forty five times what their average worker is making. These are problems. These are really serious problems. Now, that’s not to say I don’t believe in capitalism because I do, but unfortunately capitalism has run rampant in this country…we also should not be giving big tax breaks to the one percent and corporations.”

The misuse of the “independent contractor” classification was a strong concern for a constituent as well as for Wild.

“The misclassification of workers is what we’re talking about,” explained Wild. “People who are called independent contractors when in fact they are employees…and it is becoming a major problem because we now are turning to a gig industry where people are hired to drive for Uber or Lyft, and they are not being considered workers, so they are not accruing any money towards retirement…They have no rights to unemployment compensation [or] worker’s compensation…This is and has been for some time now a major problem. It’s also a fraud. It is a tax fraud for an employer to call somebody and get an independent contractor when they in fact aren’t.”

Finally, during the town hall, Wild was asked only a few times about the impeachment inquiry, with some constituents expressing anger that the president has not been impeached yet and others complaining that the inquiry might be taking the congresswoman’s attention away from other important issues.

“It is a mistake to think that those of us in Washington are spending all of our time on impeachment,”

To one constituent asking why Rep. Adam Schiff cannot hold those that are not cooperating with the impeachment inquiry in contempt and imprison them, Wild had a firm response:

“Adam Schiff is not a judge.”

After being criticized by a student for supposedly ignoring local issues like education in favor of focusing on impeachment proceedings, Wild insisted that that was not the case.

Wild ended the town hall by urging the audience to “vote…out” lawmakers who take campaign donations from lobbyists like the National Rifle Association, and encouraged her constituents to approach her office with their issues.

Photo Courtesy of The Office of Congress Woman Susan Wild