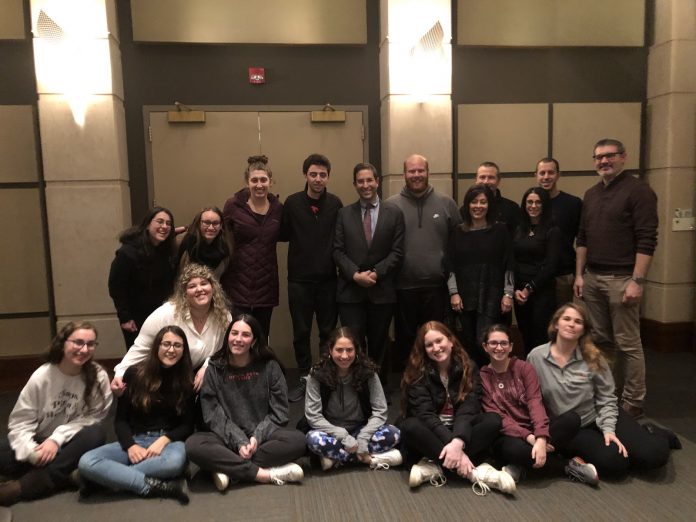 Gil Hoffman, the chief political correspondent and analyst for The Jerusalem Post, visited Muhlenberg’s Miller forum for a Nov. 7 talk sponsored by Hilell called “Red State, Blue State, and the Jewish State: an Insider’s Look at America’s Impact on the Future of Israel and the Middle East.” Hoffman is described by his Jerusalem Post bio as being “well-connected to Israeli and Palestinian leaders” and having “interviewed every major figure across the Israeli political spectrum.”

In his talk, Hoffman explained how Israel’s government, a parliamentary democracy with a legislative branch called the Knesset, functions. He especially focused on the recent 2019 elections in Sep. and Apr. after which lawmakers were unable to form a government.

“In Israel we have twenty nine parties running our election in September, which was down from forty parties that ran in April,” explained Hoffman. “Nine parties got in, got the minimum number of votes…about 140,000 votes, which was a record low. No one party’s ever gotten a majority of the vote, which makes it very hard to govern.”

Hoffman also discussed the fraud and bribery charges plaguing Prime Minister Benjamin Netanyahu and the possibility of another election if a government is not formed soon.

Audience members had mixed responses to the event and its relevance to the talk’s title.

“Based on the title I thought it was going to be more [about] some kind of data and analysis on American feelings and actions towards Israel based on political affiliations,” said Nesya Sloane 23’. “It was mostly just his opinions, charming anecdotes and Jewish jokes with very few facts about anything.”

“I didn’t agree with all of his, but that’s how it is sometimes,” said Nesya Sloane 23’. “There’s a really wide range of Israeli journalists. I think he clearly knows the political system very well, which is good because that’s his job. I have had experiences with Israeli journalists far more to the left and to the right than he is, so I think his opinions are in no way representative of his entire field. Some of the things he said in his talk and his answers during the q & a definitely rubbed me the wrong way, but that’s bound to happen in any presentation about Israel.”

“He represented Israel in a very authentic way, in his review he gave me a feeling of a messy but full of hope observation,” commented Hilell Israel Fellow Talya Inbar. “He was very real about how complicated the politics are.”

“While we are all human and all have opinions that are inherently going to appear in our everyday interactions, I believe that as an Israeli journalist, as the Chief Political Correspondent for the [Jerusalem Post], Mr. Hoffmann has a responsibility to the people to present Israel in an unbiased way to the best of his abilities, which I do not think he did,” said Avital Kessler-Godin 22’. “I was disappointed that he did not talk about Arab representation in the Knesset. His presentation lacked a multidimensional analysis of the political state in Israel and the relationships between Israel and the United States,”

However, she explained, “I appreciated that he took everyone’s questions and answered them thoughtfully. It was great to see that the event pulled people from both the Allentown and Muhlenberg community.”