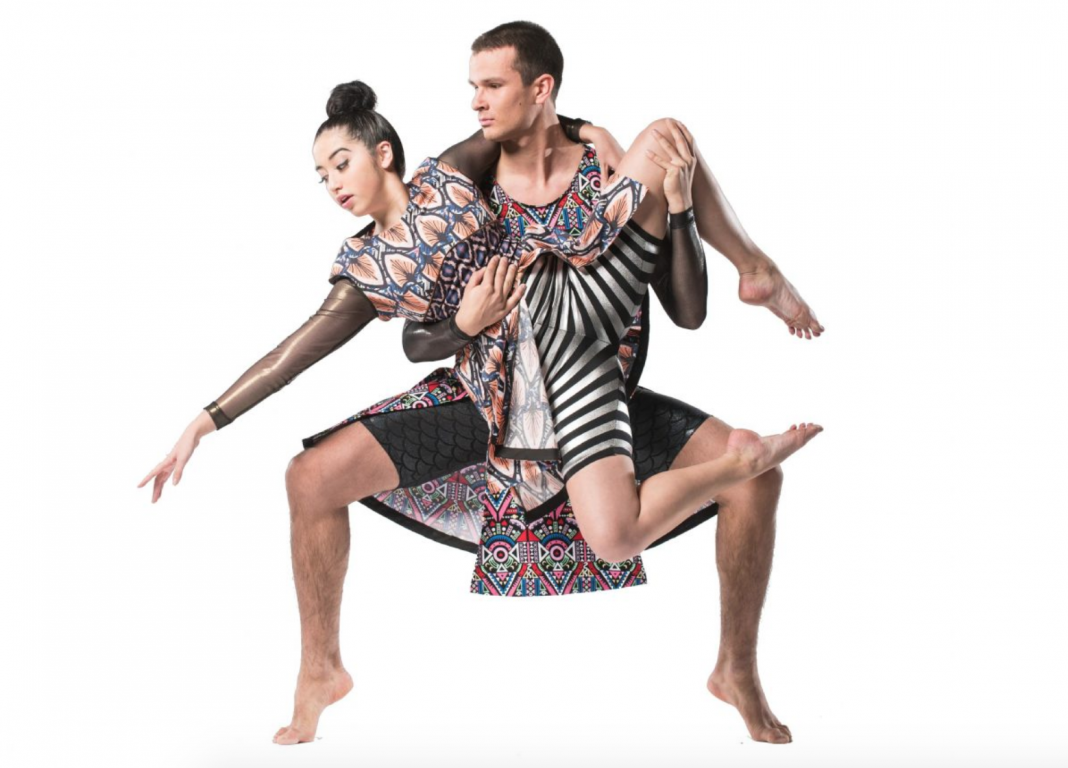 As the lights go down, I shift to the edge of my seat. I place my elbow on the armrest to my right, ready to push my glasses as close to my eyes as humanly possible. I don’t want to miss a single detail of what’s about to happen right in front of me.

Red flares up along the back of the stage, interrupted only by the silhouette of a jauntily tipped martini glass and the shadowy forms of people, posed as if the audience had hit pause on the beginnings of a Gatsby-esque gala. One of the shadows starts to move, and as an understated, yet supremely cool, cover of “Fever” sneaks its way into my ears, the shadows become partygoers. I am gone. All that’s left is the dance.

Thus began Master Choreographers 2018, an annual showcase of Muhlenberg’s finest dance students performing stunning works created by faculty and, in the case of the chilling “It Happens Only Once…Yesterday and Tomorrow,” this year’s Baker Artist-In-Residence Tiffany Mills. Seven works were presented on the Empie Theatre stage, a program that transported audiences to different worlds for nearly two hours in total. Those two hours were a product of about six months of work for both the dancers and choreographers involved, as auditions were held around the same time as the fall dance show Moving Stories in September. Dancer Lauren McGinty ’18 recalls the audition experience as an arduous but rewarding one.

“Master Choreographers auditions are the biggest auditions of the year for dancers, so the Dance Studio Theater is absolutely packed for those few hours,” McGinty said. “A few faculty will teach about a minute of their own choreography, which we then perform in small groups by order of seniority. The audition process can be a little stressful but it’s mostly fun because you get a taste of what each of the choreographers are looking for in their piece.”

Though McGinty has played the roles of both dancer and choreographer in her illustrious career at Muhlenberg, this performance presented her with a unique task: taking on a featured role in Mills’ piece meant that McGinty needed to explore a bit more of the acting side to dance. Mills’ work began with one dancer lying face-up on the ground, rocking with her head tilted back to meet the floor and arms outstretched as though she were an overturned insect. McGinty’s character approached the dancer tentatively, seemingly debating whether to help or stay away. Throughout the performance, an ensemble of zombie-like dancers followed and sometimes encapsulated McGinty’s character, occasionally trapping themselves in an endless loop of individualized movements.

“I was really able to take ownership of my work in this piece as I had to do some work exploring my character’s journey throughout the piece,” said McGinty. “Tiffany gave me some hints as to what my journey was, but I had [to] embody my own choices in such a way that were clear and communicable to the audience which was a new and pleasant challenge for me in the dance word. The space, my peers and my own body had to transform in order to establish the nightmarish world in which Tiffany envisioned in her mind and I am so thankful to have had the opportunity to allow my theatre and dance training culminate in such a great way for this concert.”

For fellow second-semester senior Cat Ward, however, Master Choreographers took the form of a fairytale: in dance professor Karen Dearborn’s piece “Streaming,” ballerinas clad in green floated over a lush landscape of clean lines and sunny smiles. According to Ward, the bonds created during the rehearsal process were what really made this dance special.

“This piece was extremely important to me because it involved really appreciating the community of dancers you are working with,” Ward said. “As a senior, I’ve been reflecting a lot on my experiences here at Muhlenberg and it has been the people I’m surrounded by that have made my time so precious. Karen Dearborn is an incredible artist, teacher, mentor and person and having the opportunity to be a part of her work meant an indescribable amount to me. The piece was one of two pointe pieces throughout the show and it was truly an honor.”

The second of these pointe pieces, Heidi Cruz-Austin’s “Widow’s Promenade II,” enraptured audiences with its space-age tutus and combination of classical and modern techniques, creating an enticing new conception of what ballet can be. Though this piece was certainly one of the most visually interesting of the night, it was by no means the only dance to create an astonishing amalgamation of styles — Randall Anthony Smith, whose works almost always become audience favorites, choreographed a dance for all the senses with “Between,” a three-part exploration that implicated all those watching in its actions. Pointed fingers that accused viewers and dancers alike became number ones and eventually turned on their owners, marking spaces on their own foreheads as targets.

Even pieces that stuck to one style of dance, like Shelley Oliver’s tap piece “On the Precipice,” had audience members grinning and cheering as soon as the curtains opened and reached new heights in terms of skill, inspiring sheer awe in all those who attended. Each dancer was perfectly in sync with all of the rest, and also impeccably timed each step with the live musical accompaniment — tremolos on the upright bass were echoed in the toes of the tappers, and each swell of the music brought new movements to the floor.

Still, other works seemed to bring forth a sense of pure joy and fun. Elise Miwa ’20 danced in Corrie Cowart’s “If the glove fits,” the classy and coy piece described at the beginning of this article, and Jeffrey Peterson’s “Side By Side,” a jubilant tale of drab businesspeople breaking free from the constraints of their daily lives and joining together to celebrate the colorful world around them. According to Miwa, these two vibrant performances came together in very distinct ways.

“The processes were quite different, because Jeffrey’s was a restaging, while Corrie’s was an original work,” said Miwa. “The rehearsal process for ‘Side By Side’ began with learning the dance from videos of the two previous iterations of the dance, while making changes to make it fit the group of dancers we had. Corrie’s piece, on the other hand, began with a lot of our own movement, which she then worked into the piece along with much of her own choreography.”

This sense of togetherness permeates much of Master Choreographers: from the dancers’ sense of agency in their own performances to the friendships created in rehearsal to the audience’s sense of experiencing a work of beauty alongside other humans, there is always someone to turn to. Look out for future dance performances, including Dance Gallery towards the end of the semester. Until then, though, perhaps keep in mind the spirit of dance as expressed by Ward:

“Dance is a way of expression and it lives in each of us every day (even those who claim not to be dancers). The way we move is so deeply a part of who we are as humans and I think a show like Masters just really emphasizes that … If I could capture every moment, every feeling, and put it in a jar to save forever, I would.”

The legacy of Charlie Richter

FundCab delivers on fun, stories, heart, and an important cause

A summer with no song, no dance, and no celebration