Home Arts & Culture A Walk in the Park 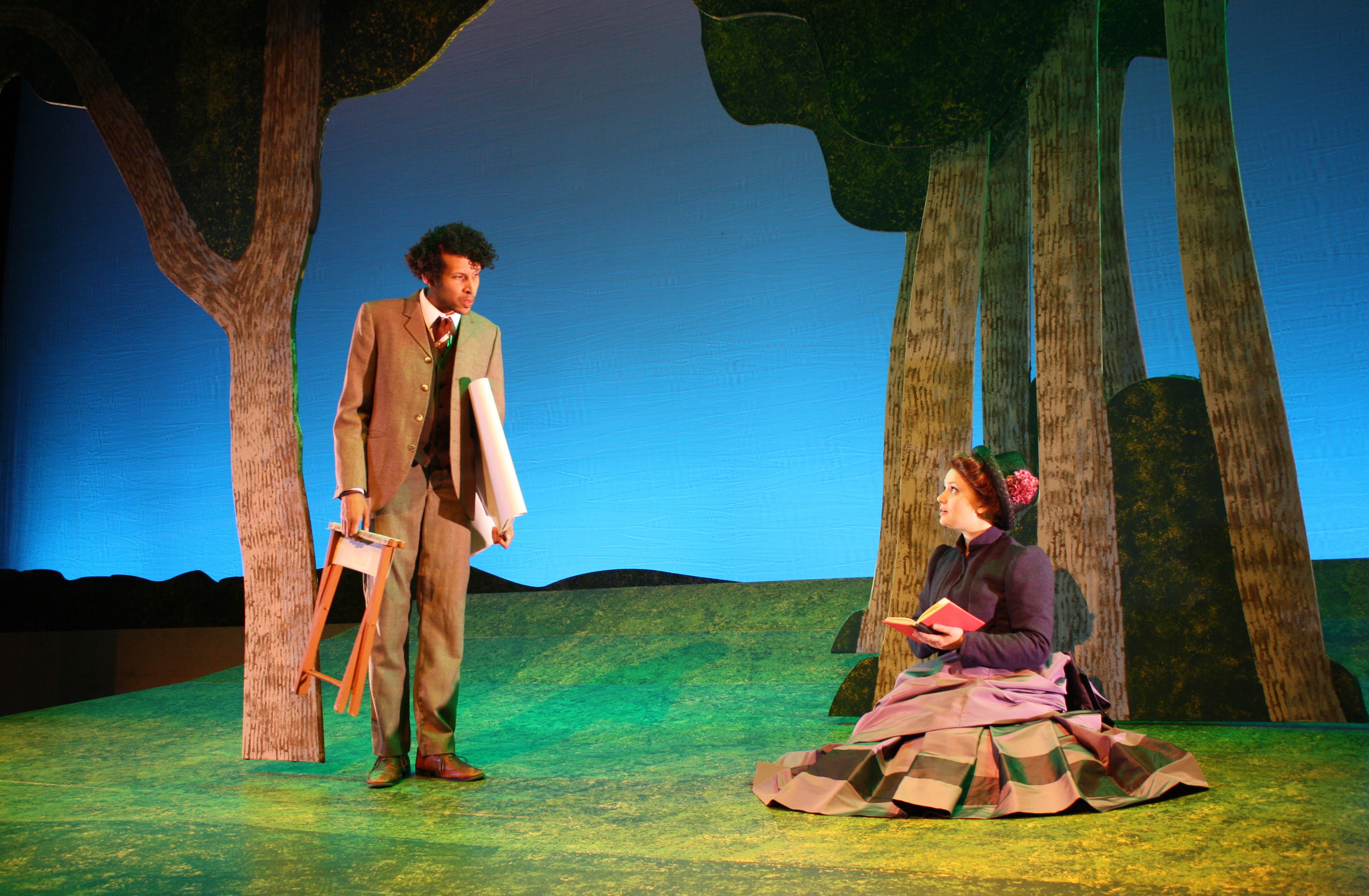 The stage is like a painting. A green hill grows out of the black Empie Theater floor, sloping towards a bright blue sky, pale-toned light playing on the imagined grass as if peeking through a grove of trees. Three staggered frames form a sort of picture-box, a stereoscope torn from the turn of the last century, and transform each seat into a prime spot to view the gallery of work which will soon pass in front of an eager audience’s eyes. This is more than theater—this is art.

Of course, for the students and faculty behind this fall’s mainstage production of Sunday in the Park with George, art is just what they intend to be. Running from Oct. 27 to 29 and Nov. 2 to 5, this 1984 musical by the legendary composing/scriptwriting duo Stephen Sondheim and James Lapine takes its audience on a journey through two parallel time periods, both exploring the ways in which art interacts with the daily demands of life. Because of this span across centuries, each cast member, including Evan Brooks ’18, who brings to life the play’s eponymous character, must shoulder the experiences of two separate personas.

“[I play] the 19th century pointillist painter Georges Seurat and George, a young, ambitious, kind hearted artist. Both George’s lives and actions are motivated by their creation of art,” Brooks said. “I have a deep love for Sondheim and so being able to perform in my third Sondheim [show] has been a complete joy.”

Though Brooks takes on the task of portraying a liminal artist, caught between the need to create imagined worlds and the need to live in a real one, some of the other cast members, like Kelly Shannon ’18, must step into the art itself to find their characters.

“ … Even without the music in the show, I would come just to see the images [Peck] has enabled us to create.”

“[The show] centers around [Seurat’s] work, ‘A Sunday Afternoon on the Island of La Grande Jatte,’” Shannon said. “My character is Dot in the first act. She is Georges’ mistress and lover … [and also] models for his paintings. In ‘A Sunday Afternoon on the Island of La Grande Jatte,’ she is the woman with the huge bustle … in the foreground of the painting on the right side. She’s wearing a lot of purple and black. She has a monkey attached to her and a black parasol … The first act focuses on the development of this painting based on his observations and perceptions of people who are wandering about the park, and what it ends up becoming is a love story, not only … between artists and their work, but also between artists and the people that are around them.”

Both Brooks and Shannon are fascinated by the ways in which the musical’s two time periods weave together into one seamless narrative.

“In the second act, I play Marie, who is … second-act George’s grandmother, and first-act Georges’ daughter,” Shannon said. “The second act is about Georges Seurat’s great- grandson, who is also named George, and him trying to figure out how to balance keeping up a certain novelty in his art and also becoming involved with the more professional side of being an artist, and having to deal with the financial aspects of it. He’s very good at navigating the art-social world, but he finds that … he ends up losing some of his inspiration in the process and becoming … a little bit depressed … It ends up being a wonderful connection between these two time periods … there’s this wonderful transgenerational development of learning how to balance art and life between these multiple generations of people, and what you learn by the end is just so fascinating to watch.”

The characters as they appear in the show, though certainly inspired by the life of Seurat, have an interesting relationship to his true story, according to director and theatre professor Jim Peck.

“The details of Seurat’s approach to painting and his place in the 1880s Paris art scene are all accurate. The account of his relationship with Dot is largely fictional,” said Peck. “Dot is loosely based on Seurat’s real-life mistress Madeleine Knobloch. She posed for his painting Young Woman Powdering Herself (as does Dot) … but the specifics of their affair … were invented by Sondheim and Lapine.”

Shannon insists that it is Peck’s attention to detail combined with the cast and crew’s talents and dedication that truly make this production remarkable.

“Jim [Peck] is a wonderful and collaborative director, and even without the music in the show, I would come just to see the images he has enabled us to create,” Shannon said.

Whilst observing one rehearsal during tech week, I was able to witness the painstaking manner in which these images were put together. As Bree Ogaldez ’18 and Brandan Skahill ’18 stepped up onto the green platform and began to perform a duet about one of Seurat’s paintings, Peck adjusted their movements with an eye for symmetry and cohesion, ensuring that each actor was moving towards exactly the right spot at exactly the right time. When Gabrielle Hines ’18 and Chris Torres ’18, who play the same roles, switched out to perform a comic moment simultaneously, the theatre full of fellow cast and crew members erupted with laughter.

Later, Brooks and Shannon entered a scene from opposite sides of the stage, each focused on their own trajectory and task. “You guys are coming on together,” Peck reminded the pair. “Make eye contact.” With this simple note in mind, the actors reset their positions and walked on stage in perfect sync, connected—a testament to the level of detail required to perfectly tie together a scene, land a joke, or create an intentional moment.

“I’m excited for people to see and hear the work of my collaborators,” Peck said. “The score is breathtaking, the actor/ singers are astounding, and the design is a sumptuous visual feast based on one of the most admired art works of the last hundred and fifty years. This is an extremely difficult musical, challenging on every level, and not many undergraduate colleges would even attempt it. It’s an honor and joy to work with students, faculty, professional staff and guest artists who have the level [of] skill needed to assay a piece like this. Everyone involved is rising to the occasion.”

Make sure to buy your tickets for Sunday in the Park with George before that final Sunday arrives—this occasion is one that you won’t want to miss.