Home Sports From X’s to O’s 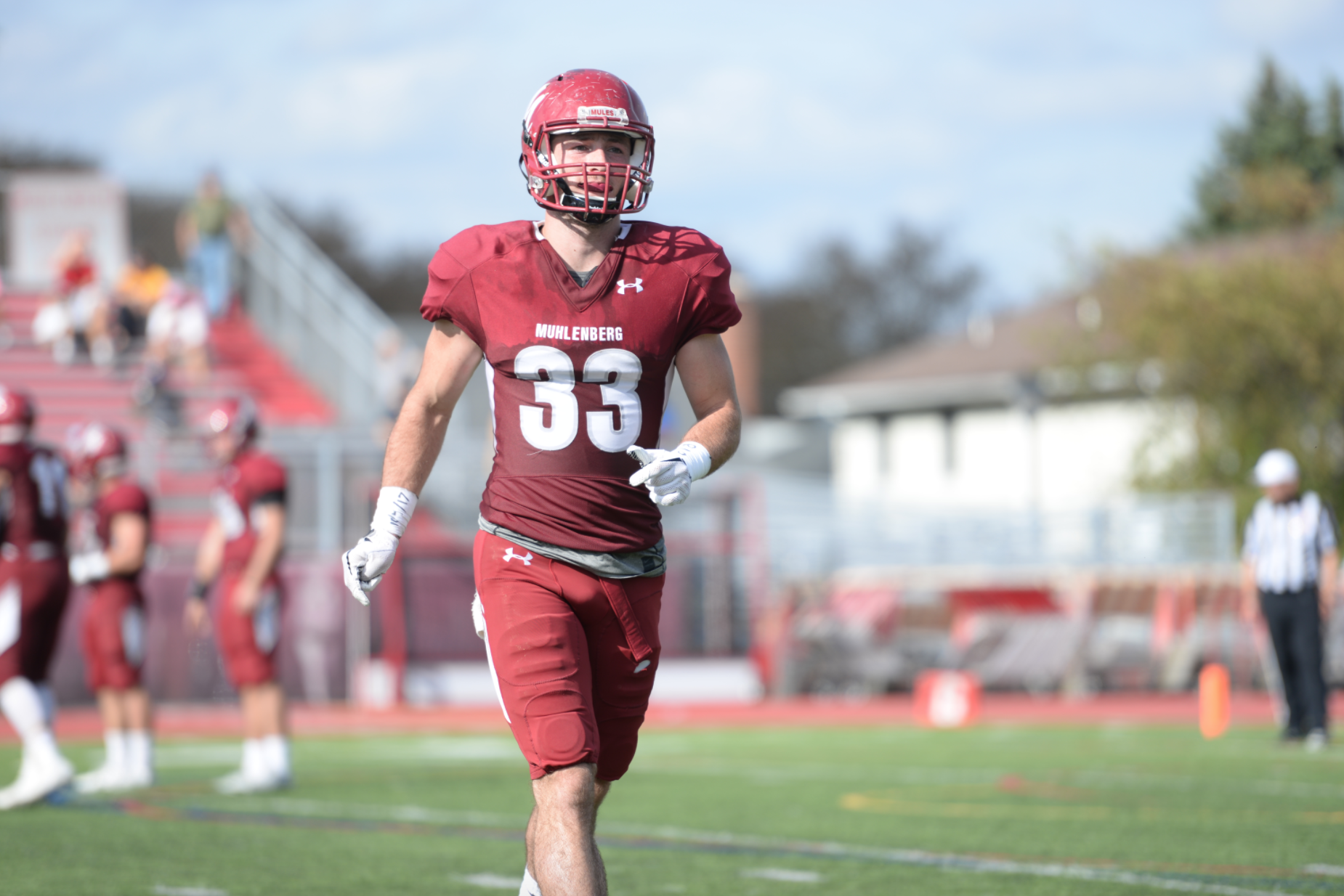 “That tackle was made by number 33, Kyle Wilczynski,” booming over the sound system at Scotty Wood Stadium was a common occurrence during the 2015 and 2016 seasons. Kyle Wilczynski ‘18, more commonly known as Wiz by his teammates and coaches, was a dominant starting outside linebacker for the Muhlenberg football squad. Previous to his senior campaign, Wilczynski recorded seventy-eight tackles and four interceptions, three of them returned for touchdowns.

Wilczynski’s senior campaign brought the versatile standout a new challenge. For his senior season, Wilczynski made the switch from defense to offense. Specifically, wide receiver.

The decision to move him from linebacker to wide receiver came during player evaluation meetings during the past offseason. The void was left at the wide-receiver position after the graduation of Muhlenberg record-setters Ryan Delaney and Nick Lamb, who Wilczynski credits for much of the 2016 success.

“I sat down with coach Donnelly, who was the first person to propose the idea to me. Our offense was very strong throughout my junior year in the 2016 season and led in many statistical categories thanks to Muhlenberg standouts Nick Palladino, Ryan Delaney and Nick Lamb. They all had record setting seasons, and they all were also graduating. Our pass offense was the biggest question mark coming in to this season having only one varsity returner, Josiah Wright, so Coach Donnelly, myself and the other coaches all agreed for me to give it a try during our spring ball practices. After a successful spring, the team and I decided I could be best used on the offense at wide receiver,” said Wilcznski, explaining the thought process behind the move.

Assistant coach Joshua Carter, along with the rest of the coaching staff, thought that Wiz’s skillset on defense could translate at wide receiver. “Wiz is a tremendous athlete who made a ton of plays on the football for us defensively. We thought that Kyle would a great mixture of size, speed and physicality.” Carter also felt that having Wilczynski at wide receiver “would help our team’s depth offensively and allow some of our younger wide receivers a chance to grow and mature behind a guy who has shown he can make plays at the varsity level.”

Although this is Wilczynski’s first year on offense at the college varsity level, he has had some previous offensive experience, although he always felt at home on defense. “I played both offense and defense in high school, however in high school I played running back on offense so there was a lot to learn at my new position. I also played a couple of snaps on offense my freshman year on the JV team when we were short on players in our rotation. Other than that I’ve always viewed myself as a defensive minded player first.”

Although Wilczynski has adjusted well to his new position over the course of the season, he still feels that he has a lot more to learn about playing wide receiver and credits his teammates for helping him along the way. “I still continue to learn every day in practice. My teammates are extremely helpful in explaining concepts and describing how to alter a route when a defensive player is playing a certain technique, like man or zone. Throughout the season I felt much more comfortable on the field as my knowledge of the offensive playbook increased, as well as my increase in repetitions.”

“Wiz is a tremendous athlete who made a ton of plays on the football for us defensively. We thought that Kyle would a great mixture of size, speed and physicality.” – Josh Carter

Carter has noticed significant growth in Wilczynsksi’s play and also feels that his understanding of the position has increased tremendously. “Every week you can see Wiz getting more comfortable. Our offense isn’t the easiest to grasp, especially after not having played offense for at least three years. He is gaining a better understanding and that is allowing him to play the game faster and without having to think as much. As a result, he is making more plays.”

With Wilczynski’s superb athleticism and football knowledge, the coaching staff has not had to work on making major adjustments during Wilczynski’s transition to offense. “We are really working on the small adjustments that receivers make each play to help them be successful. How to use his hands to keep defenders off of him, how to run the same route in a slightly different manner, adjusting how close or far to the next receiver in order to help him execute his assignments better,” said Carter. “He’s essentially getting the condensed version of everything. Most guys have years to learn and figure it all out. Wiz has done a great job of cramming it all into a couple of months,” Coach Carter added.

Wilczynski admits that the toughest part of his transition from defense to offense was changing his mindset as a football player, but studying offenses as a defense player helped the transition. “In my first three years I have been studying and learning techniques that can be best used to defeat an offense. I learned checks that we would make on the line of scrimmage to take away even the most effective of plays on an offense. Now I needed to learn what to search for in defeating a defense. Having a lot of knowledge about defenses definitely helped, but there was still a lot to get used to.”

Wilczynski’s studying paid off. Although the Mules came seven points short of defeating the top team in the Centennial, Johns Hopkins, this past weekend Wilczynski had a career game, tying his career high in receptions and setting a career in receiving yards for a single game.

Wilczynski’s goal for the final two games of the season is the same as the rest of his teammates. “Finish 2-0.” The senior added, “We are playing Gettysburg and Moravian next, two teams that we have a winning history against, and we are all looking to continue that tradition, starting with practices this week.”

Carter has high expectations for Wilczynski and believes that his growth as a wide receiver will be on display against Gettysburg and Moravian too. “We expect that Wiz will just keep growing within our offense. His is a unique talent that can be the difference for us on any given play. We’re happy with the effort he has given us day in and day out and hope that he is able to continue to thrive for us.”