Home Sports From South Africa to Pennsylvania: Benedict Kohler ‘23 finds success on and...

During their fall season, the Muhlenberg men’s tennis team went 4-0, including a remarkable win over Division I opponent, Lafayette. One of the biggest bright spots for the team has been the stellar play of Benedict Kohler ‘23, who has primarily started at number one for both singles and doubles. Kohler, a native of Durban, South Africa, decided to attend Muhlenberg because of its unique liberal arts education and the ability to form close connections with his professors and peers.

“One of my main attractions was it being a smaller liberal arts school,” said Kohler, “I liked the idea of being able to form relationships with my professors and getting to know and work closely with the people in my class and major [Math and Computer Science]. This is in contrast to all of the universities in South Africa, where the student population is generally over 30,000.”

Kohler also seeks to take advantage of Muhlenberg’s many unique opportunities, saying, “I like being able to explore my other academic interests and broaden my overall knowledge as well as obviously gain a deep understanding within my major. This opportunity is also not offered in South Africa, where you have to choose your major prior to entering the institution and there is little opportunity to take classes outside of it. Lastly, I really wanted to broaden my horizons by studying abroad, getting a feel for what life is like in another country and also becoming more knowledgeable and employable than students back in my home country.”

Growing up in South Africa, Kohler gained valuable experience in maintaining stability in his life, particularly during his high school years, where he learned to balance a busy schedule between athletics and academics. Kohler trained at his high school’s tennis academy both in the morning and in the afternoon. Between those hours, Kohler would focus on his academic work and has found that the rigorous daily schedule has helped him transition successfully as a college student. Looking back at high school, Kohler realizes that “this is where I really learnt to manage my time effectively and become self-sufficient with my learning. We weren’t given much tutoring, so this was very important. While playing tournaments I would still need to keep on top of my work, which forced me to be self-motivated and hardworking. These qualities have definitely helped me with my studies at Muhlenberg and in most things I do as well,” he explained.

The competition Kohler faced at a national level in South Africa has prepared him greatly for playing collegiately. While the competition level intensity has increased, Kohler feels comfortable playing at a higher level. “The competition has definitely been more intense than playing against other high schools or at the high school level. The other teams are more focused and definitely have a stronger desire to win. On the national level, South Africa has actually had many players attend Division I schools in the U.S.”

As the season began for the Mules, Kohler’s immediate success on the court earned him the opportunity to play at the ITA Southeast Regional in Fredericksburg, VA in October alongside teammate Noah Sellinger ‘20. Kohler won two of the three singles matches he played in at the ITA. Playing against elite competition at the tournament provided a major confidence boost for Kohler. Going into the final match of the fall season against Laffayette, and he found that his self-confidence has positively influenced his teammates. “Having played at a higher level than most of the players in Division III,” says Kohler, “I believe that I have this confidence in myself to beat most of these players, which will lead to the other players on the team gaining more confidence and winning their games as well. I think this was evident in our match against Lafayette, a D1 team that we’ve failed to beat in 60 years, but that we beat in the fall semester purely because we all seemed to go in with a positive mindset that we were capable of beating them that match.”

Tremendous success in the fall comes with high expectations for the spring, as Kohler hopes to dominate his opponents at the number one spot and help lead the Mules to a berth in the Centennial Conference Playoffs. “I would personally like to win 80% of my games playing at number 1. I think this should give the rest of the team a boost and encourage them to win their games as well. I think as a team, we have the ability to make it to the playoffs, and this is definitely another goal we’ll be hoping to achieve.”

Outside of tennis, Kohler finds that his favorite part of his Muhlenberg experience is building new friendships forming close relationships with his professors, who have enhanced his academic experience. “It’s been great to meet other students with similar interests and goals to me in life [who] have helped push me to do my best and have on occasion helped me reach beyond what I thought was possible for me. Some of my professors have provided me with extra opportunities to further my knowledge in the courses, which have been very rewarding and enjoyable as well,” Kohler stated.

Kohler and the Mules begin their spring season with a home match against conference foe Swarthmore at the Dietrich Field House on Feb. 22, before heading to Lake Nona, Fla. to play three matches over Spring Break. 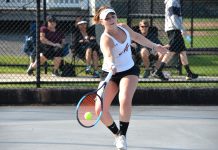 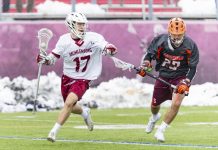