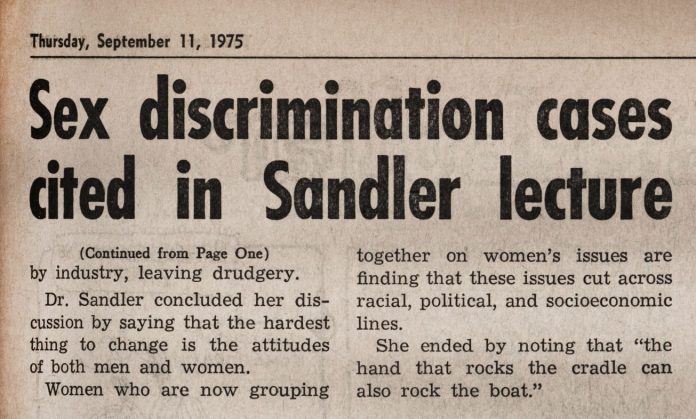 Almost 43 years ago this week, Dr. Bernice Sandler, an early activist for women’s rights in education and labor, arrived at Muhlenberg to give a lecture on the breadth and reality of sexual discrimination. Dr. Sandler has been an important voice in women’s rights and safety on campuses for decades and was crowned “the godmother of Title IX” by the New York Times for her work in pushing for the revolutionary legislation.

Title IX, passed in 1972, is a federal law that, according to the United States Department of Justice, “prohibits discrimination on the basis of sex in any federally funded education program or activity.” Today, Title IX is a central part of the discussion about sexual discrimination and assault on college campuses. It is frequently brought into question in cases of sexual assault involving college athletes, like the heavily publicized court case surrounding Brock Turner, a Stanford University student athlete who received a very light sentence for the sexual assault of an unconscious woman.

When Dr. Sandler arrived at Muhlenberg to speak in 1975, Title IX had only been in effect for three years. Some of the stereotypes she cited, such as the belief that women do not want to work or that they are less serious students than men, may seem a little dated today; however, other issues she mentioned, like the pay gap between men and women, are still plaguing many Americans.

In 1970, Dr. Sandler, who had experienced her own share of discrimination while working as a professor, filed a class action complaint with the U.S. Department of Labor against all colleges and universities participating in discrimination based on sex. This revolutionary act sparked a movement that would ultimately lead to the passing of Title IX in 1972.

Dr. Sandler’s influential books like “Sexual Harassment on Campus: A Guide for Administrators, Faculty, and Students” (1997) and “Campus Gang Rape: Party Games?” (1985) cover issues that have become increasingly pressing on campuses across the country, including at Muhlenberg.

Just weeks ago, incoming Muhlenberg freshmen were required to not only complete an online course about sexual assault and harassment, but, during orientation, were also required to attend a program where the topic was illustrated through improvisational acting. Both programs mentioned Title IX and sought to educate students about their rights on campus in regards to maintaining the safety and wellbeing of themselves and their classmates.

Despite the administration’s well-meaning in providing the necessary programs, many students took issue with the improv performance, finding the actors’ use of comedy to be inappropriate for such a serious topic, that for some, hits very close to home.

One student commented that “the production was very unprofessional” and that “the actors did not know how to address the audience respectfully.”

Another student took issue with the actors’ lack of proper representation in the material saying, “[the program] was super heteronormative. All of the scenarios featured the guy as the predator, and they pretty much glossed over what little they had to say about LGBT folks and any experiences they could have when engaging in sexual activity.”

Finding an effective way to educate students about sexual assault on campus seems to be a difficult task; however, it appears that Muhlenberg’s administration is yet to find a program that is both engaging and convincing.

In today’s political and social climate that extends beyond Muhlenberg’s campus, movements like #Me Too put even more pressure on American institutions to focus their attention on issues of gender equality and sexual harassment.

Now, at 90 years old, Dr. Sandler is still active and continues to instruct colleges and other institutions in ways to eliminate gender discrimination and sexual harassment from the classroom and the workplace. Her pertinent lecture at Muhlenberg in 1975 exemplifies the progress made by generations of women who fought for equal treatment in all aspects of life. Her work demonstrates how far our society has come since the passing of Title IX, and moreover, how much farther we still have left to go.