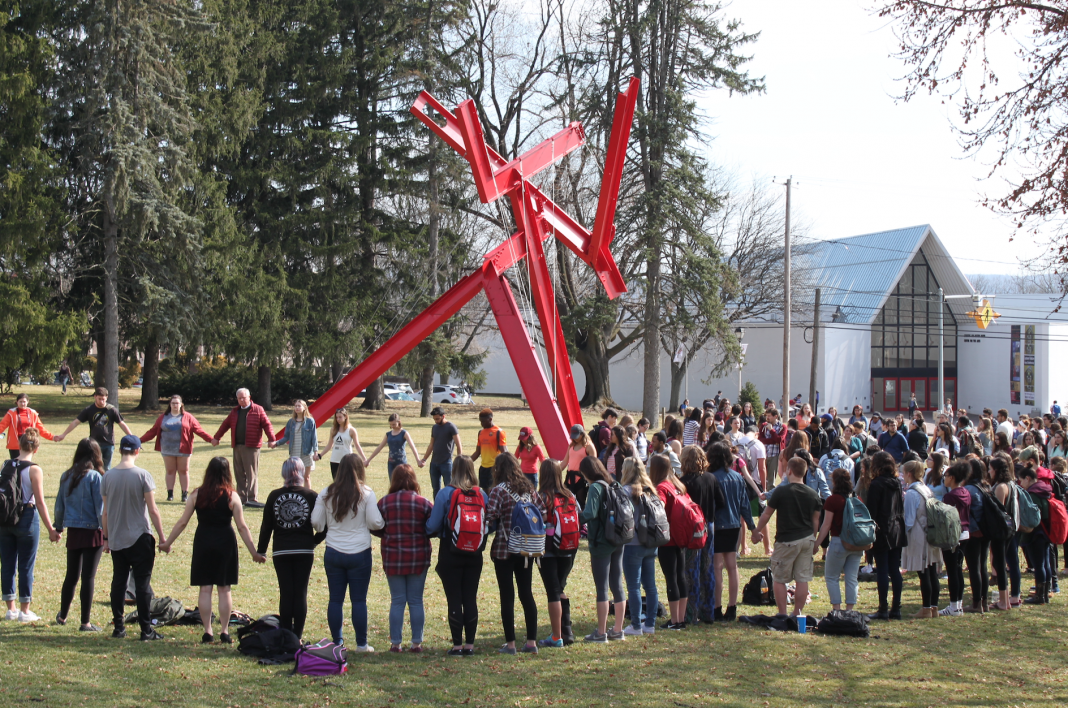 At noon on Wednesday, Feb. 21, with the College’s alma mater chiming in the background, approximately 300 members of the Muhlenberg College community gathered on the College Green near Victor’s Lament as part of a larger, nationwide protest against gun violence.

The walk out was in direct response to the mass shooting at Marjory Stoneman Douglas High School in Parkland, Fla. last week that claimed 17 lives. In doing so, Muhlenberg students, faculty and staff joined together in educational institutions across the United States and Canada.

As people began congregating, they formed into a large circle that occupied much of the front lawn. Paige Harrington ’18, one of the many organizers for the event, came to the center soon after 12 p.m. to address the group.

“This is the biggest crowd of people that I’ve ever seen come together at Muhlenberg over a single issue,” said Harrington. “I think that it really reflects what is going on in the US right now, with the number of people who are becoming active about gun violence and fighting against it.” 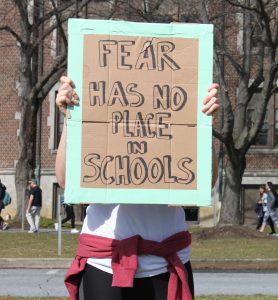 From there, the large group dissolved into four smaller groups to better facilitate discussion and reflection. Groups spoke about personal stories and experiences with gun violence, as well as plans for organizing moving forward. In particular, many professors and staff members encouraged students to take action now — a theme echoed publicly by many of the student survivors of the Marjory Stoneman Douglas shooting.

“During my junior year, there was a shooting that happened a block away from my school,” said Fitts. “We were told to remain in the building all through lunch, and then we also had to stay in the building a little after school as well, just so they could make sure the shooter was no longer in the area.”

“When that happened, it just kind of made things real for me. That, that was a block away from my school. They could have come to our school if they wanted to, and they could have…” said Fitts before trailing off.

Another student, Alec Wolf ’19, explained the challenges he faced after last week’s shooting, especially given the mental health conditions he manages.

“I just seized up and couldn’t move,” said Wolf, “because I had this sudden fear that someone could just come in at any second and just mow us all down.”

The Marjory Stoneman Douglas students have organized a March For Our Lives protest in Washington D.C. on Mar. 24; Muhlenberg students, combined with the efforts of the Multicultural Center and its director, Robin Riley-Casey, are in the process of organizing a bus to attend. Today’s walk out was organized at last night’s Students for Queer Advocacy (SQUAD) meeting, who then involved many of the other Multicultural-affiliated groups, including the Muhlenberg Trans-Advocacy Coalition, the Black Students Association and the Disability Advocacy Group.

“Since it was so last minute I was just so happy that so many people turned out and so grateful,” said Kieva Mark ’20, a member of SQUAD.

Whether or not today’s protests and future activism efforts will have any effect on gun violence, legislatively-speaking or otherwise, is unknown. What is more certain, however, is that today’s events were significant for Muhlenberg as a campus.