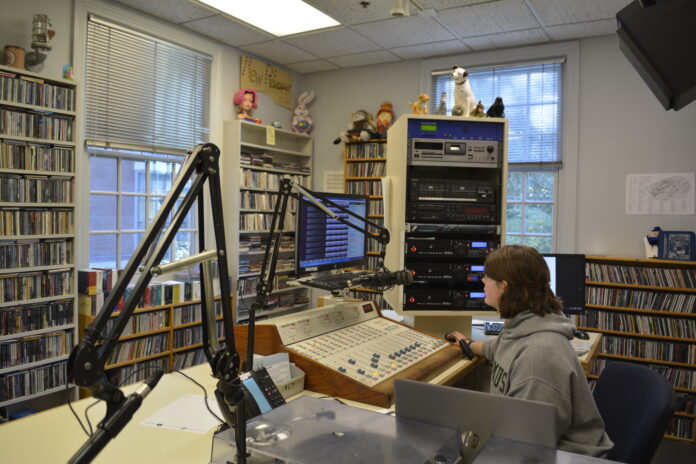 On November 6, WMUH hosted the second annual Radio Riff-Off, a campus-wide competition for musicians to showcase vocal and instrumental talent, using YouTube Live. This year’s event was hosted by station manager Michelle Rajan ‘21 and business manager Sydney Holliday ‘23, in collaboration with judges Max Kasler ‘20, Ali Watson ‘20 and Oshane Kirlew ‘17. In spite of the sudden shift to online campus life, this tech-savvy event elevated the standard to create a smooth and visually innovative presentation.

“This year, we were able to go beyond Muhlenberg’s campus and find students from UPenn, Lehigh University… We were blown away by our own talent that auditioned this year,” said Rajan. “Experience level ranged from only performing at open mics, to releasing an EP on Spotify.”

It was subsequently revealed that seven performers, introduced by Holliday and Rajan, would be competing for a number of unique and high-stakes prizes related to the field of digital music. The third place recipient received a music consultation, with second place receiving the same consultation plus access to recording space, and the winning artist received a recording session, a blog write-up and professional headshots. Whether in-person or remote, Holliday assured the audience that the winner and runner-up would be featured in the Riff-Off showcase during the Spring 2021 semester.

The first performer was Abby Schecter ‘24, who sang a cover of the song “Times are Hard for Dreamers,” from the musical Amelie. Schecter’s interpretation of the song was joyful and buoyant, and her performance was equally emotive and engaging.

Next was Renee Audrey ‘22, with a deeply emotional original song called “Mirror, Mirror.” Audrey said, “This is kind of it’s debut, which is really exciting, but this song is about my own personal journey with my body image and my relationship with food and eating.”

Audrey then acknowledged the sensitivity that these issues might have for certain viewers, and encouraged exiting the screen for a few minutes if needed. All in all, Audrey’s song, performed on keyboard, was catchy, heartfelt and complimented her versatile and resonant voice.

Abe Frey, a student from the University of Pennsylvania, premiered an original song called “Highway Advice,” which was written shortly after the 2016 presidential election. Frey’s piece was truly a classic one-man-band act, combining instrumental music from both acoustic guitar and banjo while simultaneously singing and playing the harmonica. Overall, the country/bluegrass audiovisual aesthetic was seamlessly blended with deeply moving and societally relevant lyrics to create a raw, unique experience.

Tessa Forster ‘23 performed a vocal cover of “That Wasn’t Me” by Brandi Carlisle, and her rendition was deeply passionate. Forster’s dedicated acting and vocal flexibility brought a new and unique energy to the popular song.

She was followed by Zach Montenegro ‘23, who performed a piano/vocal debut of his new song, “Flowers in Winter.” Featuring a style reminiscent of a mixture of modern jazz and pop, Montenegro’s rhythmic and chord progressions complemented his mastery of word painting in his music.

Emma Prehl ‘24 debuted an original song called “Be Together,” which featured acoustic guitar and warm pop vocals. The upbeat tune and polished performance were matched with impressive scenic design, as if viewers were situated in a traditional coffee shop open mic.

The final act of the night was an original rap piece by Bishop Pikinini called “Too Long.” “I just wrote this around a month ago; I hope you like it.” said Pikinini.” The soulful performance featured engaging choreography, and had thoughtful lyrics that were enriched by the depth of his vocal tone.

After the performers’ videos were screened, Rajan and Holliday returned to the screen, in preparation for the next phase of the competition. A link was sent in the Youtube Live chat, and participants were encouraged to promptly click on it.

“And I don’t mean just you. I also mean your grandmother, your mom, your little brother,” said Rajan. “Everyone that is watching right now…each one of you only gets one vote, so don’t vote too fast.” The link brought viewers to a ballot, where they could choose which performer they deemed worthy of the title of “Fan Favorite.”

After a surprise performance from previous winner Michael Sova ‘20, the votes were counted, and the judges began deliberation on who should be crowned this year’s grand prize recipient. The title of “Fan Favorite” was given to Prehl, and she was granted an encore performance following Sova’s.

“I literally could start crying right now, I really can’t thank you all enough,” Audrey told the group. “You’re all so incredibly talented… I was blown away every single time you went on, I was literally blown away at your talent. Thank you so much for sharing your stories… Thank you so much for showing your music to the world. That is amazing, and that is so incredibly brave.”