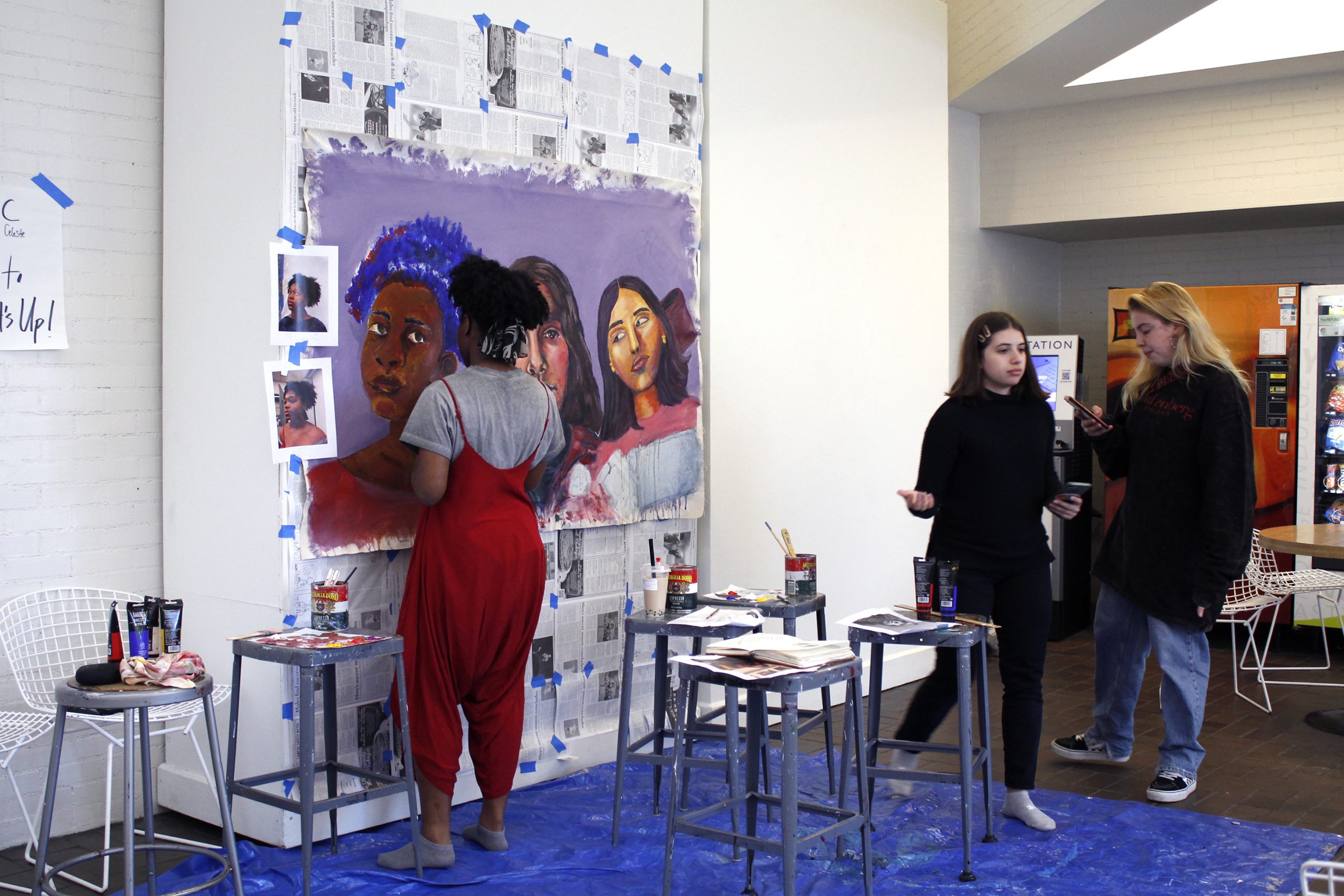 As I walk around the main floor of Seegers Union, I find that the very nature of certain spaces has been altered. What was once the Light Lounge has become both a gallery and a studio – Tatiana Lovera ‘20’s “Thank You” floats on mobile bulletin boards, the flash-soaked faces of young New Yorkers captured by Lovera’s 35mm camera whilst proudly proclaiming their right to exist. Along one wall, versatile creative Kelly Steltz ’21, one of The Weekly’s former Artists of the Week, methodically sketches a pair of hands from a reference taped to an upright board as a few passers-by stare, hypnotized; over the next day, these lonely hands will be joined on their canvas by many more of their kind, all revolving around the open petals of a flower. In Seegers 108, Nora Hardee ’22 dons a red wig composed entirely of yarn. For hours, Hardee treads back and forth, threading bright red yarn from wall to wall, tying it around itself, snipping it short – occasionally, the artist spots a brave onlooker and ties them into the exhibit, too.

That’s the thing about the Marginalized Voices Theatre Arts Festival, a brand-new event generated by the Unchained Theatre Collective (UTC) and the Muhlenberg Theatre Association (MTA) held on Nov. 8 and 9: regardless of whether or not you’d consciously decided to attend, the festival made itself known to all who ventured out and about on campus during its two days of operation. It was held in places students need to be, the places where they couldn’t just look away or avoid what they thought they didn’t want to see. The festival understood its own worth and subtly ensured that every single student at ‘Berg did, too.

“It was actually Jordan Hill [‘20]’s idea,” said Sophia Echevarria ’21, one of the festival’s organizers.  “He came to me and Dalissa [Duran ‘21] – Dalissa’s the president of Unchained – and he brought two of his E-board members, and it was the five of us that met together last semester, actually, in the spring. We planned it a little more this semester. So it was the five of us, and we wanted to find a way to combine UTC and MTA … but also highlight marginalized voices through art on campus all at the same time.”

This focusing ethics of collaboration and diversity was evident in every aspect of the festival – from interactive art exhibits to live paintings to student-written song cycles, many different artistic media were represented, including some art-focused clubs, like ‘Berg’s as-yet-unnamed slam poetry group, that have only found their feet on campus within the past few months.

“This has been a passion project of mine since the beginning of this year. I said I needed a hobby, and this is it,” said Clarissa Shirley ’22, co-founder of the slam poetry group. We spoke just after Shirley’s group had completed its inaugural performance, during which four student poets bared their souls right there in the Red Door for an entire audience of festivalgoers to hear. Shirley’s own compelling performances saw the poet through ecstatic joy, dizzying love, deep despair and haunting victory as she told her own stories, the crowd listening and snapping along, rapt.

“[Slam poetry] was created mostly in the 1970s during the civil rights movement, and original spoken word was put to poetry,” Shirley explained. “You can find poems yourself that you really relate to, and you actually start to discover stuff about yourself and your identity through it. I really wanted to share that with Muhlenberg[‘s] campus, because I feel like … a lot of times, different identities don’t get the opportunity to share their identity in a performance space that’s mainstream in our culture here at Muhlenberg.”

Many of these identities were certainly on full display throughout the event, particularly on its second day, when the festivities moved into the Center for the Arts (CA). Here, artists of different backgrounds, experience levels and interests had the chance to share their work side by side. Asherde Gill ’20 crafted an interactive art exhibit filled with self-taken photos, scissors, sticky notes and books that were meant to be opened and read (Akira, Arts of Living on a Damaged Planet and Black Woman and Other Poems / Mujer negra y otros poemas, in case you were wondering). Gill’s exhibit could be wandered through as audience members enjoyed the musical stylings of student songwriting duo Max Kasler ’20 and Gwen Wilkie ’20, whose song cycle Woven Stories was performed by an array of the pair’s fellow students in the CA Galleria. The song cycle centers around LGBTQ+ love and life experiences, featuring songs about adoption, accepting and rejecting families, living one’s life unapologetically and more. Though the song cycle has been performed on campus in years past, this time around, the composers were able to step into uncharted territory.

“[The festival] gave us a cool opportunity to audition Woven Stories, which we haven’t gotten to do before,” Wilkie said. “And so we got to have a completely new array of people, which was so awesome and kind of gave it all a different kind of meaning … I think everyone was really into it. After, somebody came up to me and was crying, and they were like, ‘Thank you for writing music that I can really connect to and that I think really speaks to who I am as a person.’ Just all positive. All positive.”

Upon descending the CA’s sloping walkway, one couldn’t help but spot the mural being painted by ABC, the collective name coined by three Muhlenberg students originally hailing from Queens, New York City: Avital Zemel ’22, Betta Malagon ’22 and Celeste Samson ’22. Accompanied by a taped-up sign encouraging onlookers to “Ask Us What’s Up,” these sophomores completed a trio of supersized self-portraits whilst exchanging laughing glances and informative discussions with those who began conversations with these living, breathing artists whose work, too, was coming alive before their very eyes.

“Avital, Betta and I are three different people who … come from the same place, but we have very different ethnic backgrounds,” Samson said of the project’s origins. “We also came from New York to here, which is, like…”

“It’s a big shift.” Samson continued. “We were just like, ‘What is a good way to put our similarities and differences in conversation with each other?’ We had the idea of painting ourselves and then items behind us … items that make us feel represented, make us feel at home, make us feel secure, safe, protected, validated in our own identities, because your experience here is very different based on who you are. This was just sort of a way to start conversations about that, because obviously we’re not the only people on the planet.”

Certainly not – the artists, aware of this fact, placed a pile of blank, white paper next to their own workspace, inviting audience members to take part in a shared artistic experience that might not just blur the line between artist and viewer, but between Muhlenberg community members of different experiences and backgrounds.

“Diversity is tackled in a very different way here than it is back home [in] Queens,” Samson mused. “I came here and like my O-Group Leader warned me, ‘The Muhlenbubble is real’ … the Muhlenbubble is one of those things where it’s just like perpetuated by the students and encouraged by the structure of Muhlenberg in itself. At first, you kind of blame yourself for staying on campus, and then you realize that campus is built so that you never have to leave.”

Shirley hoped that the weekend would help attendees bridge that gap between the comfortable and the real.

“A lot of times, festivals like these, they’re for the white person to feel better about themselves because they’re like, ‘I’m going to this,’” Shirley said, “and I hope they go in with a more open mind than that and see, ‘I’m here to learn, not to leave with a good feeling.’ Sometimes you don’t leave this kind of stuff with a good feeling, and that’s important.”

Though the feelings imparted by every event at the Marginalized Voices Theatre Arts Festival weren’t all warm and fuzzy, there was no shortage of love and light to be found wherever the festival lead. A small smile on the face of a nervous but proud poet, a ringing note left floating in the air by a satisfied singer, the joyful limbs of an attendee voguing to the music from a pop-up art exhibit – these were the signs of beauty and progress evoked by this necessary festival, the moments, though fickle, that will last forever in the minds of those who can now point to a piece of art they’ve seen celebrated at this institution and say, ‘That’s me.”