With just two weeks left to go, students are dancing their way to the end of Muhlenberg’s Spring 2017 semester. As many are aware, Muhlenberg has acquired a serious reputation for dance over the years, giving the modern-day dance major an all-encompassing, well-rounded foundation to express their passion and creativity. Beginning Wednesday Apr. 19 and ending Saturday Apr. 22, Muhlenberg held its annual Dance Emerge showcase. This event exhibits seven dedicated dance majors, who have been handpicked by dance professors Randall Anthony Smith and Jeffrey Peterson to showcase their talents in choreography. I was fortunate enough to pick Emily LeBoeuf, ’17 and Emily Ancona’s, ‘18 brains to get a behind the scenes look at the inspiration and process that went into this event. 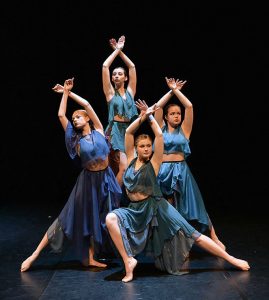 After successfully navigating this intense review process and months of diligent rehearsals, LeBoeuf’s modern piece, “Marbled Grace,” was the first to hit the Studio Theatre stage. Combining impressive ethereal movement with an innovative concept, it made for a stunning start to the show.

“Coming to Muhlenberg, I really wanted that sense of community I always had growing up and definitely got that from being here. The dance department is great with that, and I am just as close with my professors as I was with my studio teachers,” LeBoeuf said. “…[For my Dance Emerge piece,] I knew I wanted to do a prop study. I had five dancers with five black stools. My piece was inspired by statues and the awakening of them after hundreds of years, [and it was inspired by] the fall of the Roman Empire as well.”

The piece began with each dancer standing atop a stool, slowly shifting between different statuesque positions. Eventually, the dancers stepped off of their stools, and, freed from their pedestals, celebrated their newfound range of movement with flowing steps and intriguing body shapes. Though this isn’t LeBoeuf’s first experience with choreographing, it’s certainly one that will hold a special place in her heart – as a senior, this was her last opportunity to showcase her work in a college setting.

“…The experience this semester has been so humbling and I was so proud of my dancers for what they’ve accomplished this semester and [for] bringing my piece to life,” said LeBoeuf. “Tears were shed at the final performance on Saturday night, and I couldn’t be more thankful for my experience here in the department.” 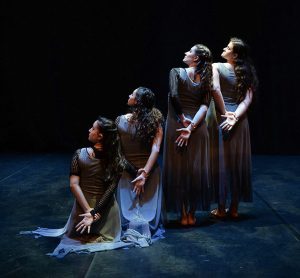 Though Ancona is not a senior, she echoes LeBoeuf’s appreciation for the department that has nurtured both of their talents. Her piece “On the Corner of Calvert and Shoreham” was a definite crowd favorite, garnering laughs with its quirky characterizations and cheeky interactions between dancers.‘

“My main concept that I began with was people-watching,” Ancona said. “I knew I wanted to make a piece that was more fun to watch and more relatable than pieces I have made in the past. Once my cast was chosen, they picked characters and the relationships between each character brought the piece together. During the process, I found huge amounts of inspiration from the dancers I worked with. All of them are amazingly talented and having their input and their support was huge.”

Though the support of her dancers was certainly helpful, according to Ancona it was still a challenge to fit such an ambitious piece in the small and exposed Studio Theatre.

“…I tried to use the space to my advantage and made the dance take place on a street corner so the dancers could move from the corners of the space as if they were on a sidewalk,” said Ancona. “This ended up being a motif of the piece.”

Like Ancona, the other choreographers of Dance Emerge utilized the space to its fullest, bringing to life the rest of the pieces: “4/3 π(arm)3” by Shaelyn Casey ’17, which made use of the dancers’ abilities to craft shapes and tunnels out of their bodies; “…And All Her Friends” by Samantha Rosenfield ’18, in which all-female dancers lost and found each other through cohesive movement; “respice, adspice, prospice” by Brianna Gitnik ’17, which saw three women playing off of each other’s movements; “And You Are?” by Loren Sass ’17, which was largely danced to the sound of a rainstorm and made use of repetitive patterns and groupings; and, finally, “One…Hit Wonder?” by Emma Fichtner ’17, which staged a comedic fight between two superstars over a lone microphone. 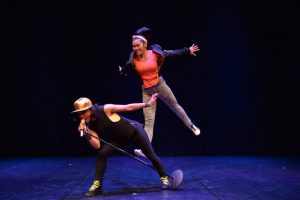 Each dance brought something different to the flavor of the showcase as a whole and allowed each choreographer to make their voice heard loud and clear: they are here, and they’re making their mark on the Muhlenberg dance community.