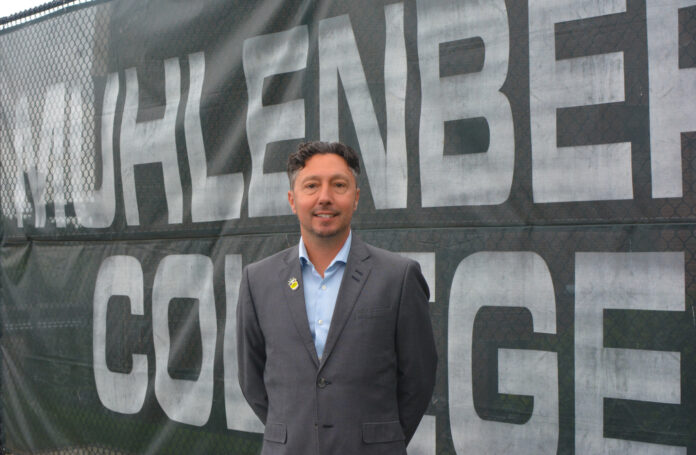 David DeLasCasas Kurvink was just named the head coach for men’s and women’s tennis at Muhlenberg College. However, Muhlenberg is not his first stop in the Lehigh Valley. DeLasCasas Kurvink was a 2003 graduate of Moravian College. As a player, DeLasCasas Kurvink had a 50-17 record, while receiving all-conference honors all four years. Previously, he was the men and women’s head coach at nearby DeSales University. While at DeSales, DeLasCasas Kurvink led the teams to a combined 99-48 record, with both teams having great success in the playoffs for multiple years while he was at the helm. The women’s team qualified for the MAC Freedom Playoffs in all four years of his tenure, and advanced to the championship match in 2017 and 2019. On the other side, the men’s team coached by DeLasCasas Kurvink advanced to the playoffs every season as well. Before the coach’s arrival, the men’s team at DeSales had only one playoff appearance.

DeLasCasas Kurvink’s previous success shows that he is willing and poised to take on this new opportunity with the Mules. Last season, the Muhlenberg men’s and women’s team did not have as much success as they would have liked. In the spring, the men’s team finished 4-4, while the women went 1-6. However, the team and their new coach are up for the challenge to ensure Muhlenberg tennis continues to trend in the upward direction.

DeLasCasas Kurvink is ready for this new opportunity as the head tennis coach at Muhlenberg. “The Muhlenberg community has been very supportive, and I was able to jump right in and get to work. We are excited about the renovations on the tennis courts and look forward to using them in the spring. I also plan to engage the Muhlenberg community with some great family tennis programs to expand the outreach of our teams,” said DeLasCasas Kurvink.

By creating an emphasis on community outreach and engagement, DeLasCasas Kurvink is dedicated to not only bringing the tennis community, but also the greater Muhlenberg community, together.

Despite the women’s team only being scheduled for two games this season, DeLasCasas Kurvink is still hopeful for the season to come. “It is an exciting time for Muhlenberg tennis,” he said.

DeLasCasas Kurvink noted there is also room for improvement. “I walked into a situation where both teams were down in numbers, but we were able to pull some students from the community and it looks promising that we will be able to compete with both teams. Both teams are still looking for strong players,” DeLasCasas Kurvink said.

In terms of roster size, DeLasCasas Kurvink continues to be dedicated to making the team as formidable as it can be. With the priority on the greater community and finding players within Muhlenberg, DeLasCasas Kurvink is doing everything so that both tennis teams are set up for a strong season. “It is exciting coaching both the men’s and women’s teams. It gives each program the opportunity to be a single program or become part of a larger team when both teams are combined supporting each other.  This is not my first time rebuilding a program and I am up for the challenge,” said DeLasCasas Kurvink.

DeLasCasas Kurvink is not doing all of this by himself, however. “This is the first time that both programs have a full-time coach, there are so many variables that go into a successful program and this will allow the program to grow. We were also able to hire a solid assistant coach, Amadou Diop, who has an honorary degree from Muhlenberg.”

With DeLasCasas Kurvink now at the helm, many of ‘Berg’s tennis stars are pumped to get the season underway. “We are really excited to have a coach this year. From our courts getting redone to our daily practices, we are looking forward to our upcoming season,” said Rose Glantz ‘22.

Mules hoops a month away from opener

Tennis serves up this fall