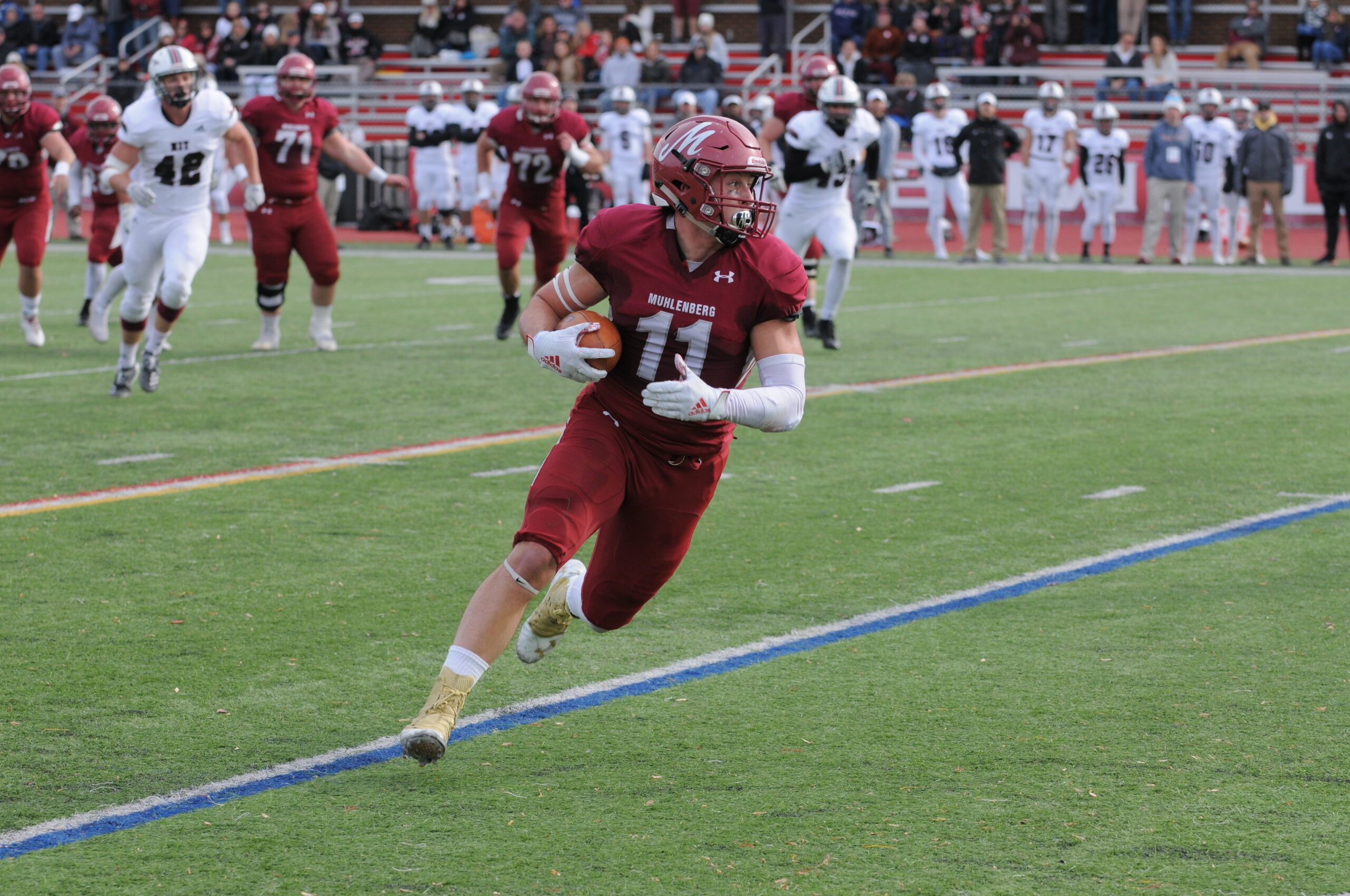 In what has been a difficult year for college athletics, Muhlenberg football has continued to work hard and are looking to build off the success of the 2019 season, where they went to the semifinals of the NCAA tournament. Beyond the addition of the Class of 2024, Ryan Curtiss ‘20, who received two first team All-American honors during his illustrious playing career that ended last season, has decided to stay at Muhlenberg and become the coach for the Linebackers.

Given the craziness of the pandemic, Curtiss made the decision to stay and help the program he has already given so much to. It’s clear from his playing career that his knowledge and feel for the game will help the continued success of the program for years to come.

Another reason why Curtiss is such a great addition to the coaching staff is because of the obvious history he already has with the team, making the transition easy for the new coach.

“Transitioning from playing for Muhlenberg to coaching for Muhlenberg was a very easy transition for me. During my time playing here, I became really close with the coaches and was able to see them as more than just my coaches. They became friends and family to me and they took me in with open arms as a coach,” he said. “They have been very supportive with helping me transition into a coach and to be the best coach I could possibly be for this program. I have not been able to experience the full force of coaching yet because of COVID, but I am going to be fully prepared for when the time comes.”

This has been a natural fit for the new coach, who broke school and Centennial Conference records for career receptions (148), receiving yards (2,024) and receiving TDs (29) by a tight end. Before coming to Muhlenberg, Curtiss played one year at Division-II Pace University as a middle linebacker, where he recorded 29 tackles. Clearly, his mind for the game has allowed him to easily fit into the role and help the next generation of Muhlenberg football like Anthony Merchlinsky ‘24.

“Coach Curtiss does a great job at getting the energy going at practice and kind of setting the tone for the day. He knows what it takes to be an All-American and win championships as a player, so we all try to follow his example and listen to him as much as possible,” said Merchlinsky. “He has the first hand idea of the work that has to be put into to achieve the goals we have on the Muhlenberg football team and his examples as a player and coach are great standards for us to follow.”

Knowing the practice regime and playbook are definite advantages for Curtiss. He is able to use his experience and knowledge to create the same hard-working mentality with ever-changing teams.

It also helps that he is coming in with such a stellar reputation. “Most of us coming in knew about Coach Curtiss and his playing career because he was an All-American and kind of a feature that we all got to meet on our visits,” Merchlinsky added. “It has been really easy to build a relationship with Coach Curtiss because he knows what it is like to be a player and can easily connect with us about anything we are doing.”

This has not gone unnoticed by the new coach and realizes the importance of his history with the program. “The freshmen know I am a former player of the team and have respected me well as a coach,” said Curtiss. “They push themselves during the practices we have had and they show how they want to get better and be ready for whenever we may have a season.”

Former teammate Michael Hnatkowsky ‘21, who threw for 46 touchdowns last season, knows just how crucial it can be to have someone like Coach Curtiss on the staff. “His presence is very important. I think anytime you have a guy who played for the same college he is coaching at is important, because he understands the work ethic and what it takes to be very successful,” Hnatkowsky said. “He’s going to be able to show the young kids in our program what it’s like to be a winner on and off the field and so far his presence has been great.”

Obviously, he has not been able to work with a full team, with only freshmen and a limited number of upperclassmen allowed on campus due to COVID-19. Although Coach Curtiss has enjoyed this new opportunity, the current environment has made it difficult. “I have been very blessed to be able to coach players that have been my teammates and friends. The circumstances have been really hard for our team because typically we would be playing a season right now,” he said. “But coaching the freshman has been a ton of fun. I have been able to experience a lot about coaching and having been growing as we coached the freshman.”

Getting in that necessary experience and being able to leave an impression on younger players will take this team a long way. While Curtiss is not naive to the hardships, he realizes that it comes with the job and still remains focused on making this team better than ever. “While it has been hard to make relationships with all of them because of the lack of time, we will continue to work hand in hand to become closer with each other and we are all excited for what the future brings this team,” said Curtiss.

“I do not have many expectations for myself, but I always strive to do the best at whatever I’m doing. I want to be able to become the best coach I can be while I am coaching,” he said. “I do not know what my future path may be, but if I succeed and enjoy coaching, I may run with it.”

For Hnatkowsky, watching his former teammate transition has been both rewarding and difficult.

“Watching Ryan [Curtiss] make this transition for me is bittersweet. Playing with him was awesome because he was a great teammate and a phenomenal football player,” he said. “I know he will be as successful as a coach as he was a player because of how hard he will work. The transition has been cool and I am excited to get back to work with him soon.”