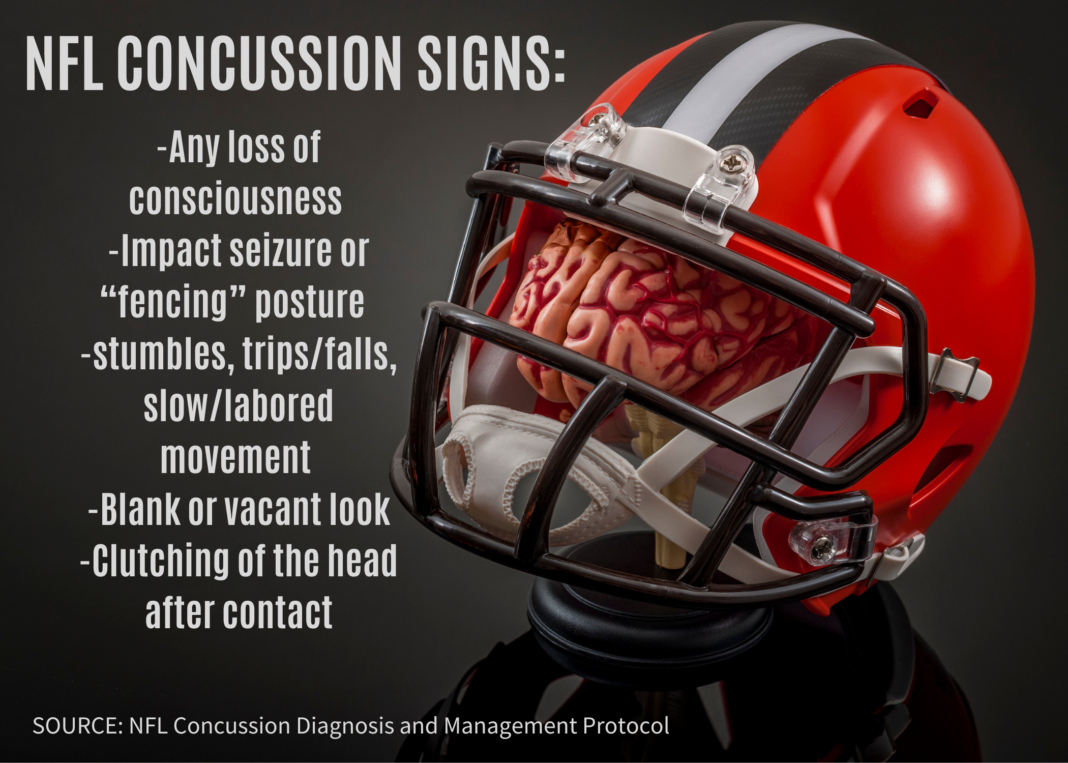 It’s a Thursday night game and Miami Dolphins’ quarterback Tua Tagovailoa walks up to the line of scrimmage. Before every play, he analyzes the Cincinnati Bengals’ defense. Depending on how his opponents react to his offensive’s formation, Tagovailoa might call an audible he knows will exploit the defense. He doesn’t.

Tagovailoa commands the center to snap him the ball. He flips around, as if to hand the ball off to the running back on a designed run play but instead keeps it. Rolling to the left side of the field, staying within the play design, Tagovailoa hopes to catch the defense off guard with a pass play. Unfortunately, the defense reacts correctly, tightening pass coverage down the field while the defensive line applies pressure to Tagovailoa. As he attempts to flee from the attacking bodies an opposing player grabs him and swings him to the ground, ending the play. No worries, Tagovailoa will get back up. He doesn’t.

Tagovailoa remains on the ground, slowly rolling onto his back, his arms and hands forcibly locked into a contorted position, better known in the medical world as the ‘fencing position.’ Team doctors rushed over to him, and before too long, the entire field gathered to the scene to show respect. Tagovailoa is lifted onto the stretcher, fully secured and strapped down.

After only a few short hours, he was discharged from the hospital and diagnosed with a concussion. What makes his concussion particularly uncommon and concerning is that it was likely that the quarterback had been recovering from a possible concussion while the events of that Thursday night game occurred.

During a play four days earlier on a Sunday game against the Buffalo Bills, Tagovailoa made similar contact to the ground which caused him to involuntarily stumble after getting back up off the turf. The stumble prompted Tagovailoa to be put into the NFL’s gametime concussion protocol. Independent neurologists determined that he was non-symptomatic: it was ruled that the stumble was caused from an unrelated back injury and was released to return to play.

To call the doctors who cleared Tagovailoa ‘independent’ is a bit misleading. While it is true that these medical professionals are no longer hired by the individual club teams, the NFL does employ them as unaffiliated neurotrauma consultants. Although these consultants should be able to assess Tagovailoa’s team without any bias, the subtle pressure from the league to allow a star quarterback to return to the game might have been the case for the Sunday game.

What made this situation potentially life-threatening is the possibility that Tagovailoa could have developed Second Impact Syndrome (SIS)–when someone gets a second concussion before the first one has had a chance to heal. According to the Mayo Clinic, SIS may result in fatal brain swelling. If Tagovailoa was prevented from returning to play during that Sunday game against the Bills and placed into the NFL’s post-game concussion protocol, he would not have been put in the position to be reinjured in the Thursday game against the Bengals.

A knee injury has objective symptoms–doctors can physically see and diagnose an issue. Whereas a brain injury, can be undetected and potentially masked by the patient due to how subjective symptoms can be. Motivated to stay in the game, Tagovailoa might have decided to hide his ailments in order to return to the field.

Tagovailoa has since fully recovered and has been cleared to return to play. During his first game back, against the Pittsburgh Steelers on Sunday Night Football, Tagovailoa managed to lead the team to victory, 16-10.

The problem, however, still remains. The unaffiliated neurotrauma consultants are hired and/or compensated by the NFL. A subconscious bias can influence these neurologists to look past certain symptoms if that means returning a star player to the field. In order to protect players from long-term health problems related to head injuries, the NFL should rely on a player’s personal doctor to clear them to return to play. If you get a concussion when working at a warehouse, your boss doesn’t drag out the warehouse neurologist to assess your ability to return to work. An independent concussion specialist is the decision-maker whether someone is able to return to work. So, why can’t the NFL follow that same model?