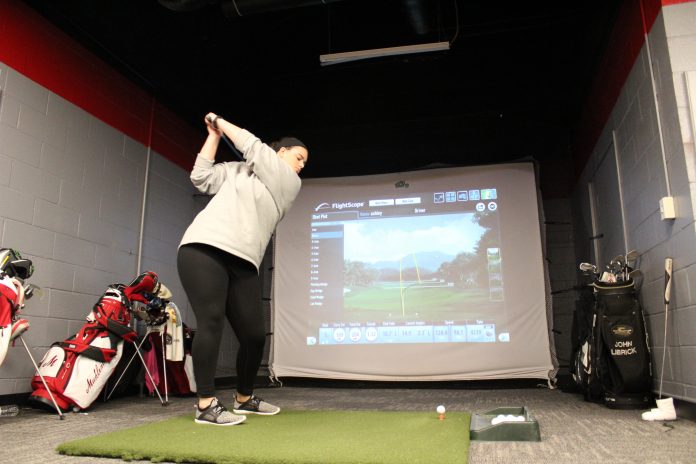 However, since fall 2016 , once Muhlenberg’s golfers walk into the Life Sports Center and escape the cold and snowy days, only a few long hallways are all that stand between them and a driving range, legendary golf courses such as Pebble Beach and Augusta National and a separate putting green.

Well, the golfer’s clubhouse is actually just a room with a large screen, a putting green and a few couches. But what livens the room with energy and technology is the FlightScope TrackMan – A white, rectangular device that could pass for an average middle schoolers lunchbox if quickly glanced at. Using a computer software program and the TrackMan, a few clicks on a computer turns the clubhouse into a state of the art practice facility.

The FlightScope TrackMan found a home at Muhlenberg thanks to a few visionaries who originally suggested the idea to the Athletics Department’s administration. “A couple of the players did a slide show presentation to our Athletic director,” explained Librick. “The presentation included the various simulators and the cost of each and their opinion on what would be the best for our team. It also included how the clubhouse should be set up.”

“Simulators provide a great supplement to one’s development as a player. You have mathematical evidence behind the result of a shot and can adjust your swing or equipment to improve your game” Evan Overcash ’18

After the team’s plan of action was accepted by athletics, two parents kind-heartedly decided to match a set amount of donations from other alumni. “Together with the Athletic Department, Alumni and parents working as a team we were able to make this room a reality,” said Librick.

Each golfer can step up to a small patch of artificial turf carpeting about 10 yards from a projector screen which covers a whole wall of the clubhouse. With the Flightscope sitting just a few feet behind the turf patch, golfers can hit any club into the screen which shows a projection of the driving range or selected golf course. Using combined camera and radar tracking technology, the monitor can analyze ball speed, club-head velocity, angle of attack, spin rate, shot distance and other critical golf measure and spit out the data in seconds.

“From a strictly technical standpoint the simulator gives every player statistical feedback,” said Evan Overcash ‘18. “Simulators provide a great supplement to one’s development as a player. You have mathematical evidence behind the result of a shot and can adjust your swing or equipment to improve your game.”

Many of Muhlenberg’s golfers have explicitly described the importance of the precise measures the radar captures much like Overcash explained. “For me the most useful aspects is being able to see your swing as a burst of photos,” explained Women’s Golfer Kat Hodges ‘20.  She uses the “frame by frame” pictures to track a closed or open club face. Hodges also appreciated being able to reach out to Librick even when the he is off campus, allowing the golfers to practice on their own time and still receive feedback without needing a coach physically present.

Men’s Golfer Ellis Focht ‘19 remembers what inclement weather used to mean without the simulator at Muhlenberg. “During my freshman year we didn’t have any way to practice until our spring break trip to Florida during March. If it was raining hard enough in-season the course would be closed and we would have to take the day off.”

The benefits of being able to practice during the offseason has significantly increased the lag the team may face early in a season.  Now golfers are able to enter the season in peak performance rather than using the first few matches find their swing technique. “There has been an improvement in our team’s performance at the start of the season, especially leading up to our first tournaments in the spring. We have less rust to knock off which helps us play better earlier in the season,” said Focht.

The clubhouse with the Trackman can also be used as a recruiting tool for Muhlenberg to confidently and competitively engage talented high schoolers. Featuring five women from five different states, the diverse team has golfers that come from coast to coast. Hodges explained her transition from growing up in Texas to being a collegiate golfer at Muhlenberg. “In Texas golfing is year round so I have never really relied on a simulator before,” said Hodges. Despite the difference in location, the simulator takes away certain risks many southern golfers may have when deciding to go to a college in the north where weather does not always cooperate. “It’s very easy for me to get into a routine of practicing every day and working on my game like when I am in season or back at home,” Hodges continued.

Overcash echoed similar praises as Hodges. “When I first came to Muhlenberg and joined the golf team I was impressed by the facility the team was able to use at Lehigh Country Club. It is an amazing course and the practice facility is first class. What I did not realize was how important an indoor facility was.” Being that golf is a fall and spring sport, the importance of a seasonal practice facility means a lot to those who like to include varsity golf in their college experience.

“Together with the Athletic Department, Alumni and parents working as a team we were able to make this room a reality” – muhlenberg golf coach John Librick

The total efforts and costs of the simulator have seemingly been worth it, as the Muhlenberg Men’s and Women’s programs have both experienced strong individual and team performances during the simulator’s tenure. Since the 2016-17 season, the Men’s team has placed in the top three in ten out of 18 tournaments. The Women’s team won three out of six matches which team scores were kept.

With the spring season rapidly approaching at the end of March, Coach Librick is expecting to waste no time getting off to a solid start. “I have seen improvement with the golfers as a whole. When we finally do get outside they have already grooved their swing. The team seems to get off to a better start in the spring since we have the simulator.”

Attack of the layups