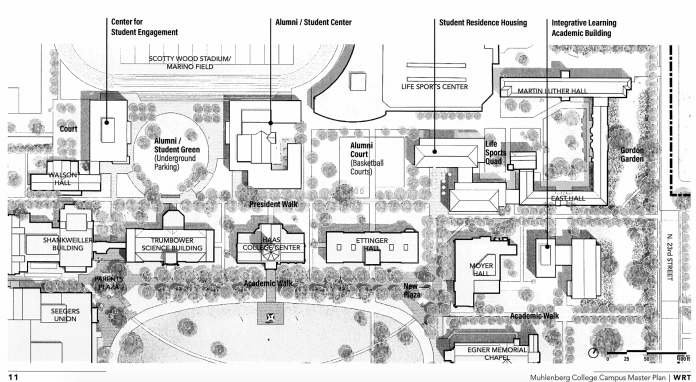 For many who live and work at Muhlenberg there is a laundry list of improvements they would want to make to the current campus. These kinds of lists and other suggestions have gone into what has ultimately become the Muhlenberg Master Plan, a proposal a little over a year in the making that was revealed in January.

The proposed renovations to campus are set in three different phases, culminating in completion in roughly ten years. The first of these phases would be completed in the next two to three years, meaning that current freshmen and sophomores may see changes before they graduate.

Some of these first phase projects include a renovation of Prosser Hall and the lower level of Seegers Union, as well as the beginning of two large-scale construction projects, including another academic building behind Moyer Hall. The proposed building is described in the plan as an “Integrative Learning Academic Building” and is intended to further combine technology and the classroom.

The next of the large-scale projects proposed in phase one is the building of a new upperclassmen dorm. This apartment-style dorm with retail spaces on the ground floor will replace the student parking lots next to Trexler Library. A parking deck will replace the spaces lost to construction. President John Williams explained that the retail space will likely include a cafe and may also be the new home for the book store.

The Master Plan’s second phase is proposed to start and be completed within the next four to six years and is the largest of the three phases. This phase includes the proposed renovation of Walson Hall, an addition to Trexler Library as well as some larger scale projects like the relocation of the tennis courts and Plant Operations facilities, the building of a new theater and an underground parking garage.

The new theater is to be built into the hillside next to the Sigma Phi Epsilon house. Williams said that the hope is to better integrate the Muhlenberg campus with Cedar Beach Park, with this theater being a part of that. It will include a large window along the back wall behind the stage overlooking the park. There will also be walking trails added along the hill making the park more accessible to students.

The current site of Plant Operations is proposed to become another student center with a large green space. Beneath the green space will be the new home to the aforementioned underground parking garage — in order to create this space, the current faculty and staff parking will be eliminated, with the underground garage replacing it and adding an additional 40 spots.

Other projects include turf athletic fields and improvements to Chew Street in an attempt to make the campus feel less divided.

The final phase of the Master Plan is proposed for completion in roughly ten years. This phase will see the renovation of Benfer Hall, additional student housing and landscaping.

“It’s a plan, it’s not a commitment,” Williams stressed. “It’s a plan that will be looked at and updated and revised over time as our understanding of the campus and its needs continue to evolve.”

Part of the reason that the Master Plan is not definite stems from funding — the money needed for these improvements will come from fundraising efforts that will begin now that the plan has been finalized.

“The master plan is a tool,” explained Williams. “We didn’t set out to do a Master Plan, we set out to strengthen the support for our academic programs as well as the support for making Muhlenberg’s residential experience more vibrant for our students.”

The plan has been developed by Wallace Roberts and Todd Design (WRT) in a process that began with strategic planning in October 2016. Over the last three semesters WRT has met with groups of students, faculty and staff and posted surveys asking for what respondents thought could be improved on campus.

“I’m very happy with the plan. When you step back and do one of these plans you see how there was always more that you would like to do,” said Williams. “If we’re able to do all of the proposals, we’ll have a campus that’s even more beautiful, exciting and vibrant.”