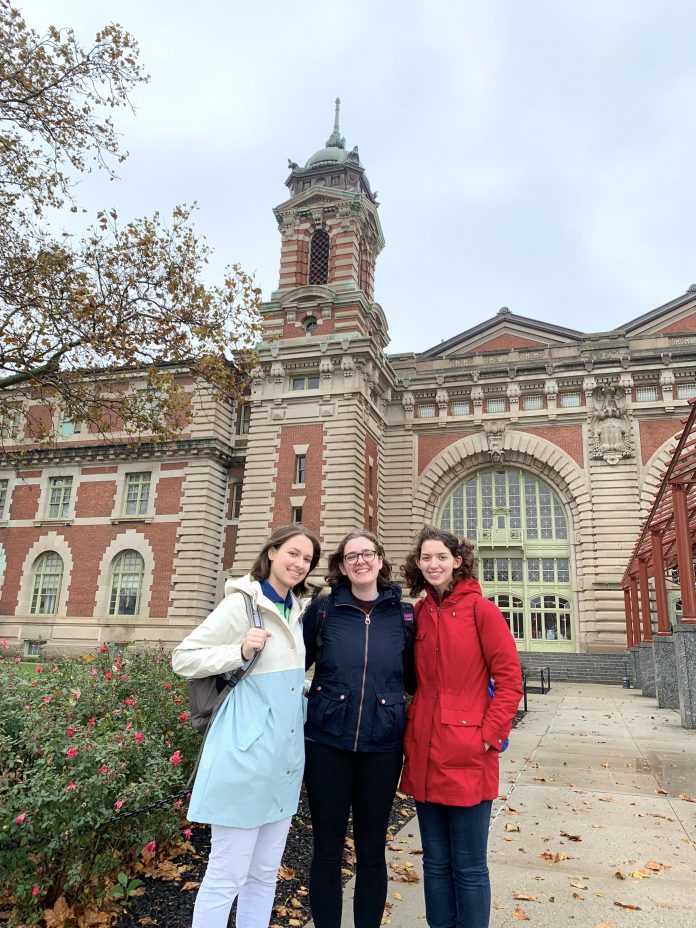 The rain poured down in torrents that beat against my back. My freezing hands desperately grasped my hood, trying in vain to keep my hair dry, allowing a deluge of water to stream down the sleeves of my well-seasoned raincoat and pool at the elbows of my sweater underneath. The echoes of a pounding pack of Muhlenberg students’ feet echoed across the dock as we all raced towards the boat. It was a ferry that promised to take us to an island obscured from our vision, enveloped by the same grey, cloudy downpour that enveloped us all: Ellis Island.

I was given the opportunity to attend this trip because it was a part of this year’s Center for Ethics series: Borders, Nationalisms, Identities: The Ethics of Global Citizenship. This is a program that implores the campus community to examine the moment that we currently reside in, in which national borders are concurrently being reinforced and permeated, and asks us to question how that has affected each of our unique understandings of citizenship, identity and national culture.

Going to Ellis Island has been a dream of mine since second grade. After going to colonial Williamsburg the previous summer, I started to gain an interest in American history, which mainly manifested in me reading the My America books over and over. Consequently, I spent a solid month toting around and rereading My America: Home At Last, Sofia’s Ellis Island Diary, but no matter how many times I asked my parents, a trip to Ellis Island continued to elude me. So, it remained on the first page of my bucket list for a decade.

My desire to go to Ellis Island was further compounded by my study abroad experience in Ireland. Ireland is a place that so many tourists travel to to learn more about their ancestral roots, and by being there, I acquired an acute yearning to go to a place where my family had once stood, which is something I had never experienced before. Every single one of my great and/or great-great grandparents immigrated through Ellis island at the ages of 17 to 23, and I, being a 21-year-old college senior, was finally given the chance to get a glimpse into the world that they saw upon their arrival. So, naturally, I said yes.

This answer is what landed me soaking wet and shivering, but also smiling, on the first floor of our ferry, the Miss Liberty, slowly watching Ellis Island materialize. According to Peter, my group’s 11 o’clock guided tour ranger, during Ellis Island’s 62 years of operation, about 12 million immigrants were admitted into the United States. As the outline of the island mystically solidified before my eyes, I was awestruck, momentary flung back in time to see through the eyes of my ancestors, immigrants about to land on the United States for the first time.

“As the outline of the island mystically solidified before my eyes, I was awestruck, momentary flung back in time to see through the eyes of my ancestors, immigrants about to land on the United States for the first time”

Once we arrived on land, and after electing to take a guided tour which recounted the story of Peter’s own grandparents’ immigration, my group was left to our own devices in the echoing chamber of the Great Hall with its imposing windows and its ostentatious chandeliers. With most of its fixtures remaining the same for the last century, the room is a picture of elegance and longevity and finally gave me the ability to see a slice of the world that my ancestors had seen. As Brooke Weber ‘20, Shayna Kronisch ‘20 and I traversed through the registry room, the courtroom and up the stairs into one of the male dormitories, we were also given the ability to see the ephemera of the other people that had passed through at the time. This helped me create a more defined picture of each of them in my mind by illuminating pieces of who they were and what was important to them, allowing each of them to become more than just nameless migrating people with a home and a destination.

Thankfully, when we left Ellis Island at 2:30, the rain had died down, and we were able to clearly see The Statue of Liberty standing faithfully ahead of us. I’ve seen her many times in the distance on my drive to Rhode Island to see my extended family, but seeing her up close is truly a beautiful experience. After circumnavigating the base of her pedestal and taking a sufficient number of selfies, we headed to the Statue of Liberty Museum, which opened in May 2019. The museum houses not only a timeline of the monument’s construction, but also various interactive exhibits that showcase the Statue of Liberty as a global symbol of freedom and hope. We ended our time on the island on the roof of the museum looking out at Lady Liberty and the New York City Skyline; all of us engulfed in the golden-hour sun.