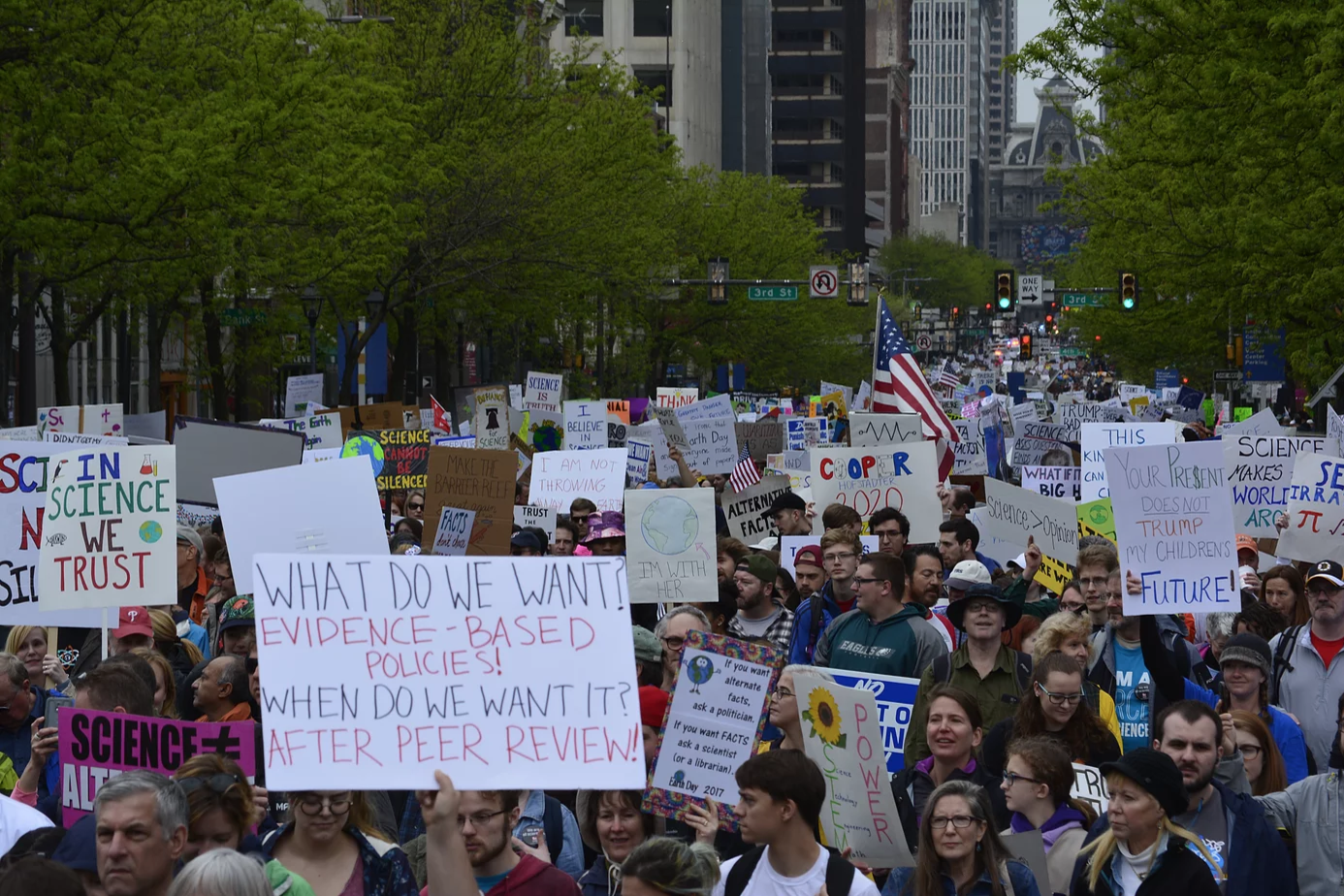 Amid swarms of college students, professors, the occasional lab coat-wearer and plenty of amateur activists, signs stood above the crowd, rain clouds threatened from above and an abnormal silence filled the air.

According to their Facebook page, the March for Science in Philadelphia brought in roughly 25,000 participants. However, these numbers didn’t necessarily produce a magnitude of noise that would typically come from 25,000 disgruntled people packed into the streets of Philly.

“I’ve read a couple different articles in the past week saying how unprecedented this event was and how we’ve never seen the scientists come out of our labs and do this kind of activism work,” said Calvin Inners ‘18, one of the lead organizers of ‘Berg’s convoy to Philly and president of the Biology Club. “It’s very odd to have these stereotypically quiet and introverted people come out and be like ‘this is an issue.’”

Over 30 Muhlenberg students, faculty and community members took the hour-long trip down to Philly to participate in the first ever ‘March for Science,’ an action prompted in retaliation to the recent attacks on funding and legitimacy for scientific research.

However, the Philadelphia march was only one of many; the main march was staged in Washington, D.C., with over 600 accompanying satellite marches across the globe.

“I was very interested in the Philadelphia march because I kind of view that as the birthplace of science with Franklin and the universities,” said Dr. Richard Niesenbaum, a Professor of Biology and Director of the Sustainability Studies program. “I thought it’d be a great idea to do it with Muhlenberg students and the Muhlenberg community.”

Niesenbaum served as one of the primary faculty members who organized Muhlenberg’s participation and transportation to the march. Members of the Biology Club were influential as well, with Inners and Treasurer Eve Balistra ‘18 heading lots of the organizing process.

Despite the march’s mission statement to remain a “nonpartisan group,” there was an obvious political agenda evoked through signs, chants and general conversation amongst marchers.

“I think on the actual homepage, it said it was supposed to be nonpartisan, but it felt like, at least for the Philly one, it ended up being pretty politically leaning toward the left and the Democratic Party,” said Balistra. “If you’re a scientist, you’re probably going to be more aligned politically with the left usually, but obviously there are exceptions, which is totally okay.”

“I think in teaching Environmental Science, I’ve been very apolitical as much as possible in the past six or seven years that I’ve been here because I want to be very inclusive to all kinds of backgrounds and perspectives,” said Karen Tuerk, a lecturer in the Environmental Science program and march participant. “I feel that this administration in particular is putting so many roadblocks to sound scientific practices, so I thought it was important to be there with students and be a part of that Muhlenberg community and be a part of that education and higher-education community and kind of say ‘this is concerning in a way that I haven’t felt before.’”

Generally, this aura of frustration that dominated the atmosphere in Philly was accompanied by a natural sense of humor among the crowd. A sign featuring the Lorax included the phrase “at least this orange guy speaks for the trees.” Another sign stated “I’m with her” with a picture of the earth and an arrow drawn to it close by.

“I think it really pushed the point of science being something different to all of us,” said Inners. “Again, I think sometimes people forget here at Muhlenberg that the reason why a lot of us do science is to help people and we are very fortunate and privileged to be in this position where we can kind of ignore that factor and just focus on our studies, but for someone who is not in this academic setting, science to them is the next medication coming out to save their life or extend their life even three months so they can spend more time with their family.”

Niesenbaum touched on the reluctance of scientists to get involved in activism due to the objective nature of their work and studies. However, this ‘denial of truth,’ as he calls it, by many policy-makers today seems to have political ties that ignore what it means to be truly scientific.

“It’s not a political agenda,” said Niesenbaum. “Science is what turned us from a primitive society into an advanced society. Science is what eliminated smallpox. Science created the internet. All the things we depend on come from science, so when you have political leaders denying the credibility of science and denying science as truth and as fact, it’s crippling to the nation and to the world.”

Now more than ever scientists are emerging as activists to combat the issues at the forefront of society. However, should this march be political?

“It’s [the march] political in a way that’s saying ‘okay, we’ve been doing this research for decades and this research needs to guide policy and it’s not anymore,’” added Tuerk. “I think scientists now see the need to get more involved in communication and policy writing and maybe even running for office.”

“Looking at science and entering that into the political conversation makes sense. If you understand a problem such as climate change, then you’re informed and then you can have a political discussion about the problem that exists,” added Niesenbaum. “We’re wasting time and energy debating ‘what is truth’ when we know it’s truth and what we should be debating is how are we going to address that truth?”

The march ended with a two hour long celebration of science, with numerous bands and speakers attending. Balistra noted a common theme amongst speakers that “it’s really the beginning and just because we had it [the march] doesn’t mean we’re going away anytime soon.”

With a continuing plan of action available on the March for Science website (marchforscience.com), anyone can follow along with daily pledges everyday this week to help support the science community.

Niesenbaum also encourages students to become more “scientifically literate” by making a commitment to “knowing what science is and being able to ascertain the difference between real news and fake news, understanding the process of peer review and understanding that the process of science has in its’ root the idea of skepticism.”

In addition to this scientific literacy, there are numerous opportunities for science majors and non-majors to help out and volunteer. Inners and Balistra both encourage people to get involved with STEM education to help develop and maintain an interest in science for the younger generations, whether it be at summer camps or even at the front of the classroom after graduation.

“In the current environment, as things like an anti-science culture and things like racism and anti-intellectualism come to the forefront, it opens up a dialogue and that’s sort of what these protests are, is a dialogue about these issues that have always existed,” said Niesenbaum. “I think young people are engaging in those issues more than ever. When it’s in your face everyday, it’s scary, and I encourage everyone to do what you can to try and make it different and try to make it a better place for all people to live.”