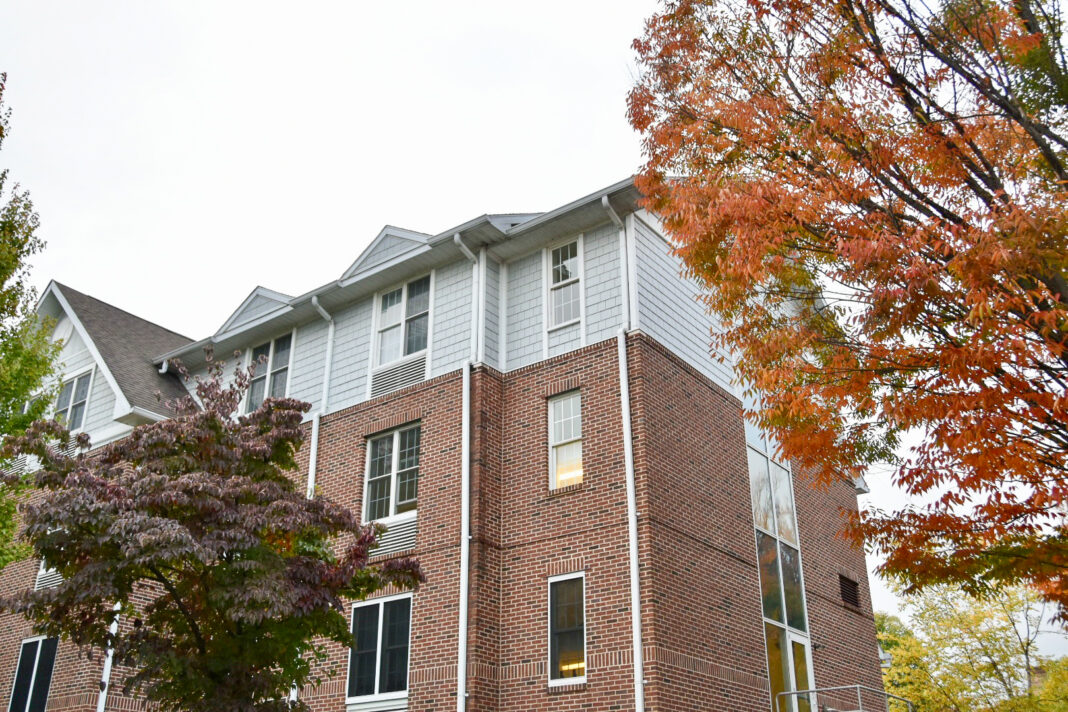 On Sept. 23, a bedroom ceiling in student-designated housing in the MILE area collapsed, leaving debris spread across Jason Ivey’s ‘23 room and belongings. He told The Weekly, “About a 6×4 foot section from the ceiling in my room collapsed with no warning while I was out of the house.” This incident left many wondering what could have caused it, what is being done to prevent it from happening again, and how the situation is being rectified with the students affected.

According to Dean of Student Life Allison Williams, MILE houses were last inspected this past July. “Every year during the summer, a team that includes a carpenter, electrician and plumber, go through and do an annual inspection and maintenance in each MILE property. And then in addition to that, the Allentown city inspector comes every five years. So the last time the city did its inspection was in 2018. And we are due for our next one in 2023.”

At the time of this year’s inspection, there were no red flags raised about the property.

Following the incident, “The College immediately hired an external engineering firm to come in and do an invasive investigation into that particular property to find out what happened first,” explained Williams.

Many of the houses on 23rd Street, where the collapse occurred, are around 100 years old and use similar materials. The College could not be certain of the materials used until the invasive search was complete; thus, multiple houses were investigated.

“We identified 12 houses that should be looked at. The engineering company then went through all of those. Four of those houses fully passed their invasive inspection with no need for any repair. Four required full ceiling replacement… Four require repairs, but it’s more like putting in an extra beam to support what’s already there. So some of those can be done while students are still in the house or over the summer.”

Williams claims that there was no way to have predicted the incident occurring. “What they were clear about is that to any inspector including the city’s inspectors, that you would not have known at all that it was an issue and even if in other properties you would see cracks in the ceiling, typically those are not indicative of any sort of issue… Those hairline cracks are not something that would send an engineer thinking that something wouldn’t pass inspection.” She added in reference to the house that sustained damage, “The invasive investigation found that on that house, the materials age and weather over time. And so the roof collapse was due to a failure in a ceiling joist and fastener in part of the second floor ceiling.”

As a result of the damage and subsequent inspections, two staff members and 10 students were ultimately relocated. An additional staff member and three students live in houses that will require future work.

The students whose MILE did have damage received help with their moving process.

Director of Residential Operations Katie Shelley shared that, “They helped us identify what things they needed to come over to their temporary housing. We assisted in moving things over [to] the building [and] unloading. They did their own packing and unpacking.”

Other students who were relocated were not offered this assistance. Des Suarez ‘23 and their roommate also had to relocate. “Around 4 p.m., maybe 5 p.m., I got a call… And she basically just told me that the inspection had turned out that they needed to do emergency work on the house, and that I need[ed] to move out, like, as soon as possible. And she told me that I had to move out by Sunday night, on Thursday.”

Suarez was offered meal swipes and dining dollars, which she accepted. Her roommate was given a different date which they had to be out by,  to which Suarez said, “I think it was just a wires misplaced thing. Then we got an email about it clarifying the time and then I went to pick up my key.” Suarez packed their things before leaving for Fall Break, and upon her return on the Monday after break she said, “I picked up friends from the airport, came back, got back around four or five. And then I was legitimately moving out for the rest of the night. It took me like six hours to move out and then move in. And they told me it was for three to four weeks, and just to bring what I would need for then because I wouldn’t be allowed to go back in, which is understandable, but… I feel like I need a lot for that. And especially [for] English majors, [there are] so many books.”

Students who were relocated were given an approximate timeline of when they would be able to move back into their housing, but not an exact date. These estimations varied per property and the amount of work that would need to be done. Other added factors contributing to return dates included uncertainty regarding how much work would need to be done until the demolition of ceilings was completed, availability of materials and workers and if students living in certain MILEs had housing accommodations. Ivey shared that he was originally given the date of Nov. 1 to be able to return to his MILE.

Shelley shared that affected students will “be able to move back into their permanent assignments before the semester is over. And in all of those cases significantly before that, but I don’t have an exact date for each of them.”

Suarez and their roommate are now living in the 2201 Chew Street Residence Hall, and both have their own bedrooms, which is what they initially had in their MILE. The students were not given a date by which they would have to move back. Suarez said, “I’m assuming I might just get another call. And we both were contemplating if we even wanted to move back because at this point, it’s like a whole ‘nother half a day doing that. It’s really exhausting… We were talking about how there should have been people to help us but there weren’t.” Only the students who directly had damage done to their housing were provided help with their moving process.

Williams added, “Max[imum]—we’re looking at [students coming] back in January. And the reason for that is not wanting to tell them October 31, and then it’s like, oh, the ceiling joists are on backorder, it’s going to be two more weeks, and then three more weeks. And that’s just more disruptive than being able to get settled in a new space. It also has to all be inspected once it’s done before they can move back in. And that’s up to the city to do so we just didn’t want to get their hopes up. But we do think it will likely be in November.”

All students who were relocated were offered assistance for dining dollars and meal swipes, “Because while folks had a full kitchen, they weren’t able to move all of their dishes over and things like that,” explained Shelley.

Ivey, whose belongings sustained damage, shared that, “As far as reimbursement they paid for everything of mine that was damaged which included a TV, Xbox and fan among other things.”

Greg Wilson ‘24 is one of the students whose house needed work, but the work was not urgent enough to require relocation of the residents. He explained, “It all happened very fast.  HRL told us it was safe to stay, however we could choose to move to another location if we wanted to. We ultimately decided that we didn’t want to uproot our whole life in the middle of the semester so we sent them an email saying that we would stay as long as they could promise us the space was safe. They responded the next day letting us know that it was in fact safe, and that our kitchen would remain usable [which was a concern considering the housemates have the College’s smallest meal plan] as the rest of the construction was going to happen during winter break. I went to sleep that night finally thinking about things other than the safety of my home. But, I was woken up the next morning by loud noises down the hall. I walked out in my PJs to find Plant Ops drilling in the ceiling. The next two mornings I had to skip breakfast because the furniture in my kitchen was pushed up against my pantry and there were tools covering the counters. We got in touch with HRL to request the remaining construction happen over break, like they had said, as long as the apartment was safe.” Residents of Wilson’s MILE were not offered meal swipes and dining dollars because they were not relocated. Right now, the house has temporary supports in place until the end of the semester, and Wilson and his roommates are staying put.

In regard to how the school handled the situation Suarez said, “I think it was fine. I mean it could have been better, but it’s just a weird situation to have to tell someone they need to move out right away. Of course I know they want us to be safe… More time would have been nice or just a more clear timeline.”

Ivey echoed this sentiment, saying, “There were a few minor things I wish they did differently but overall I think the school handled it well.”

An anonymous student who was impacted added, “The school has moved quickly in repairing damage and hopefully preventing something like this from happening again. That being said, with the number of students having similar complaints to us, better precautionary measures need to be taken to ensure our safety.”

Wilson said, “I completely understand that this is a very tough situation for the College.  This is not something that they knew about until it was too late. However, I am a little concerned that nobody is looking after the long-term safety of the properties… I hope that institutionally we can learn from this incident by working on bettering the lines of communication, and better tracking of property safety.”