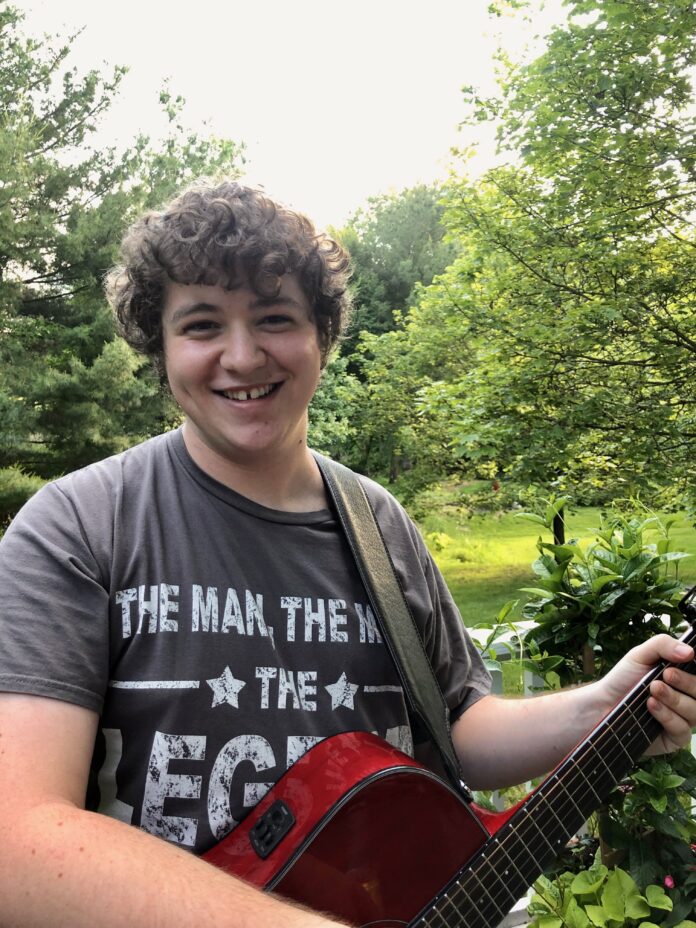 While studying remotely, students like Matthew Robertson ‘23 have used their newfound free time to pursue personal passion projects. Robertson, an aspiring rock musician who studies as an instrumentalist on campus, recently recorded and published an album of original music, which just saw its premiere on Apple Music, Spotify and SoundCloud.

“Robertson, 20, is self-taught and first began playing guitar during his junior year at The Pennington School in Pennington, NJ,” states his press release, titled ‘Songwriting in the Pandemic.’ “His first formal guitar instruction was in classes with Tom Kozic, former guitarist of Eddie Rabbit, at Muhlenberg College in the fall of 2019 and spring of 2020. There, Robertson honed his skills in the blues.”

Robertson has published his music under a stage name, “B3rt,” and he describes his music in the press release as a conglomerate of his favorite bands and styles from the British Invasion to Classic Rock, and even Punk Rock artists like Green Day. The album, titled “B3rt” after the artist’s aforementioned stage name, consists of thirteen original songs, with instrumental music and vocals performed entirely by Robertson. With a smooth voice that lends well to punk and acoustic rock, his knack for storytelling and composition are apparent, and his uncanny ability to generate a catchy instrumental thru-line gives his style flair and character.

Robertson has clear favorites amidst his collection of songs, stating that the tracks he “is most proud of are the soft song ‘​College Crush’​, the acoustic rock song ‘This Generation of Mine’​ and the more hard rock and explicit ​’Liar​.’”

As far as his process, Robertson explained that he started his journey from scratch, constructing his own recording space in his basement, and learning the mechanics of new instruments as well as music production. Additionally, his press release mentioned that he used his time at home to further his studies of effective lyricism and songwriting.

“He sees similarities to what was happening then and what is going on now. There are hard-charging electric guitars like one might find in punk music from The Who or The Clash, as well as acoustic guitars, which call back to bands like The Beatles and Bob Dylan. It’s rock and roll from fifty years ago, but more relevant than ever now, in 2020.”

“The songs he wrote during this time reflect his feelings over the past six months: missing friends from college, rage at the Trump administration, the election, and the George Floyd and Breonna Taylor protests. The album cover is a photo he took while volunteering in Africa, a place he holds close to his heart.”

Robertson elaborated that the quality of his music has been amplified by increasing social and political tensions in the United States throughout the pandemic.

According to Robertson, his “music is a throwback to a time when music was actually a call to arms, when music reflected the culture and attitudes of what was going on in America, and how young generations were feeling at the time.” Being that much of his style was influenced by the evolution of rock music over time, he uses rock history as a tool to further his technique and passion.