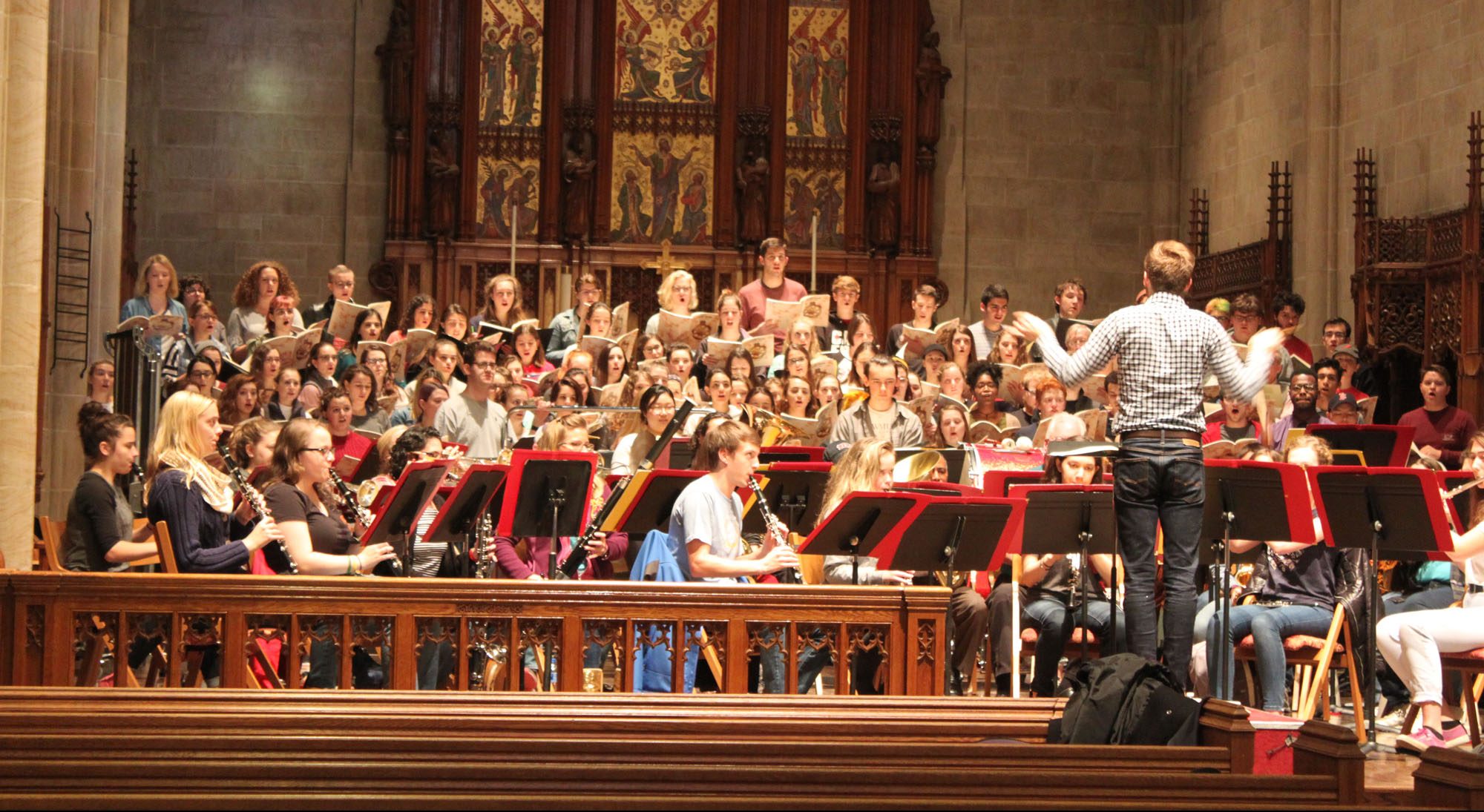 Based on a medieval text from the 11th or 12th century, Carmina Burana is a cantata by Carl Orff that was composed in the 1930s.  This weekend, the Muhlenberg College Choir and Wind Ensemble will join in a combined performance of Orff’s masterpiece. Lead by Dr. Andrew Ardizzoia and Dr. Christopher Jackson, the two ensembles have been working for months to finally bring this work to fruition.

“[Orff] describes [Carmina] as a scenic cantata. So, it’s a large work for Orchestra-Chorus and vocal soloists,” said Ardizzoia.

The piece itself is large in text and structure, divided into many parts — up to 24.

“The version that we are doing is for wind ensemble and chorus. And we are only doing about half of it,” Ardizzoia explained.

The piece is performed generally in Latin with some varying texts in either Middle High German or Old French. Again, this piece is monstrous in size and complexity, which makes accomplishing such a production almost unbelievable.

“The texts are drawn from a manuscript of medieval poetry written in a mix of languages that were spoken at the time. So an older version of German … the forerunners of modern French, and then Latin as it would have been spoken in medieval Germany at the time,” said Ardizzoia. “The manuscript was discovered in the mid 19th century in a Bavarian monastery, and [it deals] with all of the same sorts of topics that we talk about today. Love … tavern life …

one of the overarching things in Carmina is the idea of fortune, fate.

You can be on top of the world one day and sort of cast asunder the next … we are all at the whim of this … personification of good and bad luck. [This] was key to the way medieval people thought about their lives: an allegorical figure in control of everything.”

I asked Ardizzoia to further clarify this theme of fate as a driving force within the work, and how that could apply to the performance itself.

“To me, what’s interesting about that is that we tend to think of Europeans as being dominated by the church … that really their worldview is shaped by the Catholic church. [Carmina] shows that there is something outside of that,” he said. “Fate … the empress of the universe overseeing this great wheel that we’re all on, sometimes we’re at the very top of the wheel and other times we’re sort of crushed by it. The very first movement [of Carmina] describes what that’s like.

[This] is so important to Carl Orff’s understanding of the text that he bookends the entire piece with the exact same movements.

So the first movement that you hear at the top of the work is also what closes the piece as a sort of framing device.”

Several students preparing to perform in the production of Carmina agreed with Ardizzoia’s statement, specifically expressing the music’s role in emphasizing and thoroughly reviving the text to another life.

“I play trumpet in Wind ensemble,” explained Laurel Mangelsdorf ‘22, “The trumpets are used a lot in the arrangement as a sort of melodic back-up to the woodwinds and for accentuation in some of the more forceful movements.”

Mangelsdorf continued to explain the importance of such a production: “This has never been done before, combining the Choir and the Wind Ensemble, and I think it shows fantastic collaboration between so many students and faculty. It also is a beautiful and energetic piece of music, and I am sure that there is a least one part of the piece that everyone will be able to connect to.”

You might recognize the first movement of Carmina Burana, “O fortuna,” in various popular films, such as Glory, The Hunt for Red October and Excalibur. Once you hear those resounding, echoing base drums, you know that where, when or whatever you are about to do or go, it is sure to be dramatic and glorious. “O fortuna” is a piece that demands and holds your attention indefinitely — but what of the other movements?

“The first movement appears in a lot of action films,” clarified Ardizzoia, “The rest of it is really, really wonderful stuff. There’s some really lyrical moments; there are some equally dramatic moments that are just as uplifting and moving as that first.”

Carmina Burana is a massive work; it’s really complex, but is a masterpiece worth seeing in person.

I asked Greta Ohanian ‘20 to elaborate further on importance of such a production, as she is both a member of the choir and Wind Ensemble.

“I think Muhlenberg students and faculty should see Carmina Burana because it is unlike any other pieces you may have seen performed at past Muhlenberg concerts,” Ohanian said. “It incorporates both the wind ensemble and college choir, both two fantastic groups on campus, and is a very popular piece of classical repertoire. The audience will be able to recognize parts of the piece that are familiar from popular culture while also hearing new movements they have not heard before.”

See the production come to fruition this Saturday, Nov. 3 in the Chapel at 11:30 A.M.