A Cappella Fest is the largest a cappella event on campus, and this year’s occurred on Apr. 1 in Empie Theatre. Each year, Muhlenberg invites current and visiting groups to come perform for an evening in order to benefit the Allentown schools’ art programs. Featuring Muhlenberg’s six groups and five visiting groups from around the area, A Cappella Fest drew a full house for its Saturday night performance. Every group performed two songs, and the audience went wild after each group’s performance, providing for an enjoyable and interactive evening.

The event was kicked off by William Allen High School, the first and only high school group that was featured at A Cappella Fest. Despite the age difference, these kids definitely held their own on the college stage.

Following William Allen was Muhlenberg’s InAcchord, delivering a dazzling and smooth set as always. Following InAcchord were the plaid-clad Acafellas, with a fun set that was definitely a crowd pleaser! After that were the Muhlenberg Dynamics, who slayed the stage with their riffs and harmonies.

Following the Dynamics was the first visiting college group, The Wheatones from Wheaton College in Massachusetts. The first all-girl group to perform, they had great arrangements and soloists. Deep Treble from Rutgers followed The Wheatones and closed out the first act perfectly.

Between each set, emcees Jess Jones ‘17 and Lexi Schorr ‘17 introduced the groups and had witty commentary that never failed to make the audience chuckle!

The second act opened with Muhlenberg’s The Girls Next Door, whose tight harmonies were a definite standout. Following GND was BASSIC from Wagner College, whose small size definitely did not deteriorate their amazing sound. Next were the Muhlenberg Chaimonics, delighting the audience with their great set and awesome stage presence. Vassar’s Home Brewed was featured soon after, and their unique mashups definitely stood out. Home Brewed was followed by Muhlenberg’s Noteworthy, who had a great time singing some crowd-pleasing musical theatre! To close out the concert, Temple University’s all male group, Broad Street Line, wowed the audience with interesting arrangements and incredible harmonies. Overall, A Cappella Fest was an eclectic and exciting evening that was not to be missed!

Lexi Schorr ‘17, this year’s A Cappella Fest Coordinator, spoke on the challenges she faced putting such a massive event together. “It was definitely hard to balance it with school work and it was at times challenging getting everyone to cooperate and help out,” said Schorr. Despite the challenges, however, she definitely felt the experience was worthwhile. “It was so rewarding to see it all put together, to know that the groups enjoyed themselves, and to have raised $2,300 [for the Allentown School District Foundation]! And I really learned a lot about what it means to be an assertive leader while also working with a team.”

The concert is also an event that many family members and friends come to town for, so the theatre was absolutely packed. This is also the first year that all of the performing groups were permitted to sit in the audience and watch each other. It was really nice to feel a part of the community come together to support each other and make beautiful and important art. Every single group that performed had something different and exciting to bring to the table, and no two performances were the same. A cappella is not always taken seriously on campus or in the world, so it was really rewarding to be surrounded by a group of people who had similar interests and a common goal. As members of an a cappella group, we were also able to learn a lot by watching and spending time with each other. Seeing how other groups and even other schools operate and perform is so valuable.

A Cappella Fest is also a demonstration of how lucky we Muhlenberg students are to be so frequently exposed to positive and incredible art, as this concert supported schools that no longer fund art programs or activities. By using our own talents, we were able to make a difference in the lives of future singers, actors, dancers, and painters that will benefit them as they make their way through hopefully artistic lives. It was an honor to witness so much talent and joy in a single place, and I absolutely cannot wait for next year’s festival. Keep an eye out for more a cappella profiles and the final concert schedule! 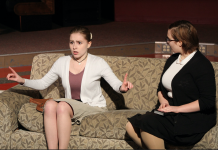 Artist of the Week