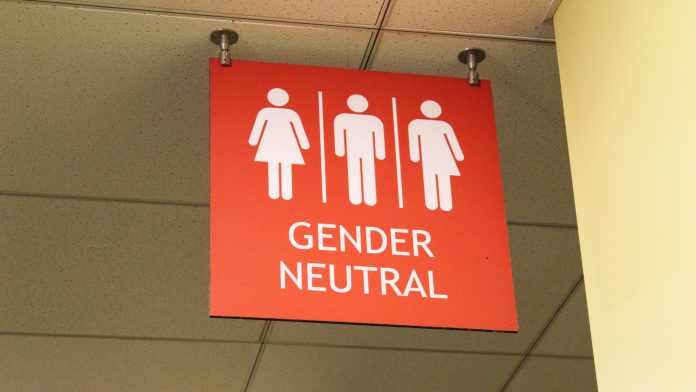 You read that correctly. I really have to pee. The gender-neutral restrooms on campus — or, more accurately, the lack thereof — are to blame. As a genderqueer trans student at Muhlenberg, I spent my first three years quiet and careful, bending to the binary when needed. But I’m through with being the one who’s accommodating. I’m done being quiet.

Last fall, I was quoted in an article for The Weekly about ‘Berg’s struggle to provide gender-neutral restrooms on campus; almost a year later, I’m writing this op-ed on exactly the same topic. Why hasn’t this issue been resolved? Where is the progress?

According to an email sent to students on Aug. 22, there has been progress at Muhlenberg. Dean Gulati shared, “We continue to expand the number of gender inclusive restrooms,” listing the Life Sports Center, Moyer and Walz as specific sites of change, and attaching a link to a “full map of inclusive restrooms.” “Continue,” as Dean Gulati puts it, is an active verb, indicating an ongoing process. Yet to a nonbinary student who actively needs to find a restroom on campus, this “continued” expansion is so painstakingly slow that it’s almost nonexistent. This letter and its contents, while a welcome update of ‘Berg’s progress, cannot be the only means of communicating such change. When this is the only physical progress mentioned to students, we see nothing more than a feigned gesture of inclusivity designed to stroke the ego of an administration whose barely-there allyship is not meeting the needs of the students they promised to serve.

I want to take a moment to discuss the “full map of gender inclusive restrooms” mentioned in the letter. The attached link brings up ‘Berg’s online campus map, which lists all campus-owned buildings with at least one gender-neutral restroom. Yet here’s the kicker: there is absolutely no information about where to actually find the restrooms once inside the doors. Considering the sizes of the buildings in question, the map is about as useful as a flashlight on the sun.

Moreover, the buildings on this list are largely homes converted for college use — the Office of Communication, Multicultural Center, Global Education, Gabriel House and Hoffman House. Due to the construction and layout of the homes, these bathrooms are gender-inclusive by default. It is not so progressive to claim gender neutrality in spaces that were never designed to accommodate a public binary. Such low-effort changes shouldn’t take years to materialize. Something as simple as hanging a sign is all that I and other nonbinary students see from the administration; even if there are truly larger efforts behind the scenes, such details remain hidden from our view, only sending us signals of apathy.

If they truly are “continuing” to make these changes, then those who are directly affected by this service must be part of the conversation, not only for our own peace of mind, but to avoid unusable maps and other missteps as well. If every student at ‘Berg truly does matter, then unacceptable treatment of even one member undermines the entire student body, reflecting poorly on the administration and Muhlenberg at large. The character of the college is best shown not through doing what’s most convenient for the greatest number of students, but for making the sometimes inconvenient or difficult changes that will most benefit a small group.

Only two of the buildings listed in the letter are part of the suite of academic spaces at ‘Berg, and they sit on opposite ends of academic row. For someone who needs to pee while trying to earn their education, this is a major problem. What makes this even more frustrating is that, speaking from experience, academic row is actually the most accessible area on campus in terms of the availability of gender neutral bathrooms, and as students, we are much more likely to spend our time in class buildings than in administrative buildings.

If students like me have the (nearly-inevitable) misfortune of taking a class that’s not held in New Sci or Moyer, there’s no quick bathroom break during lab, no emergency in the middle of class, no pit stop between back-to-back lectures. When I leave for class each morning, I pray that I’ve planned accordingly to make it to the next neutral space, and then I pray that my body doesn’t have any gastrointestinal surprises planned. Every time I leave my dorm room, I know that if I get sick, if I’ve drunk too much water or if my breakfast isn’t sitting well, then I will be faced with a choice between missing out on the education I pay so much to have or risking my health.

Cis[gender] privilege is not having these concerns. It’s this very privilege that I expect Muhlenberg’s administration to mitigate, especially because they state that they are committed to continued change. According to ‘Berg’s Diversity Strategic Plan, the school aims to create a campus “supportive of inclusion” such that it “actively” recruits and retains students of “historically underrepresented groups,” in part by adding gender-neutral restrooms. The Plan “proposes the creation and/or identification of gender neutral bathrooms” and states that “we support costing out this initiative to include such bathrooms.” Looking closely, support of this initiative is for “costing out” and simple “identification” of restrooms, not making strides of tangible change. Once again, I must press, where is the progress? As it stands now, this portion of the Plan reads as bureaucratic jargon, not concrete action. Cost analysis and identification are passive at best, simply acknowledging an issue without finding solutions. While I don’t claim to know the inner workings of higher education or the moves necessary to create the change for which I’m demanding, I know the importance of semantics. I have no doubts that the words here were chosen with the utmost care, and actionless change is not change at all, no matter how sweetly it’s framed.

The plan goes on, saying that the school “proposes adding the option of gender neutral bathrooms in any building with more than two bathrooms, as well as considering adding additional bathrooms to buildings.” Currently, “the subcommittee supports this concept in principle, while recognizing that there are logistical issues to be resolved.” I have the following response to the subcommittee: thank you, in principle, for your support, but I, too, would like to recognize that there are issues — issues of dignity, of respect, of inclusion, diversity and equity — to be resolved. Ultimately, the most glaring issue here is your lack of progress.

Supporting something “in principle” is not enough. Allyship is active. It is making change, it is pushing forward, it is being unsatisfied with ‘how things are now,’ even if the ‘now’ in question is marginally better than the now of yesterday. “Recognizing” logistical issues is not the same as solving them. Not only is allyship active, it is also work. The labor cannot only be done by the “marginalized groups” the school claims to serve. We need more than recognition and support. We need action.

The administration must do better for its students. If ‘Berg truly “strongly believe[s] that diversity is essential to learning and to our success as a pluralistic community,” as its mission statement claims, then those in power must create and sustain action. Supporting the concept of gender neutral restrooms is not enough. Especially not when I still have to pee.