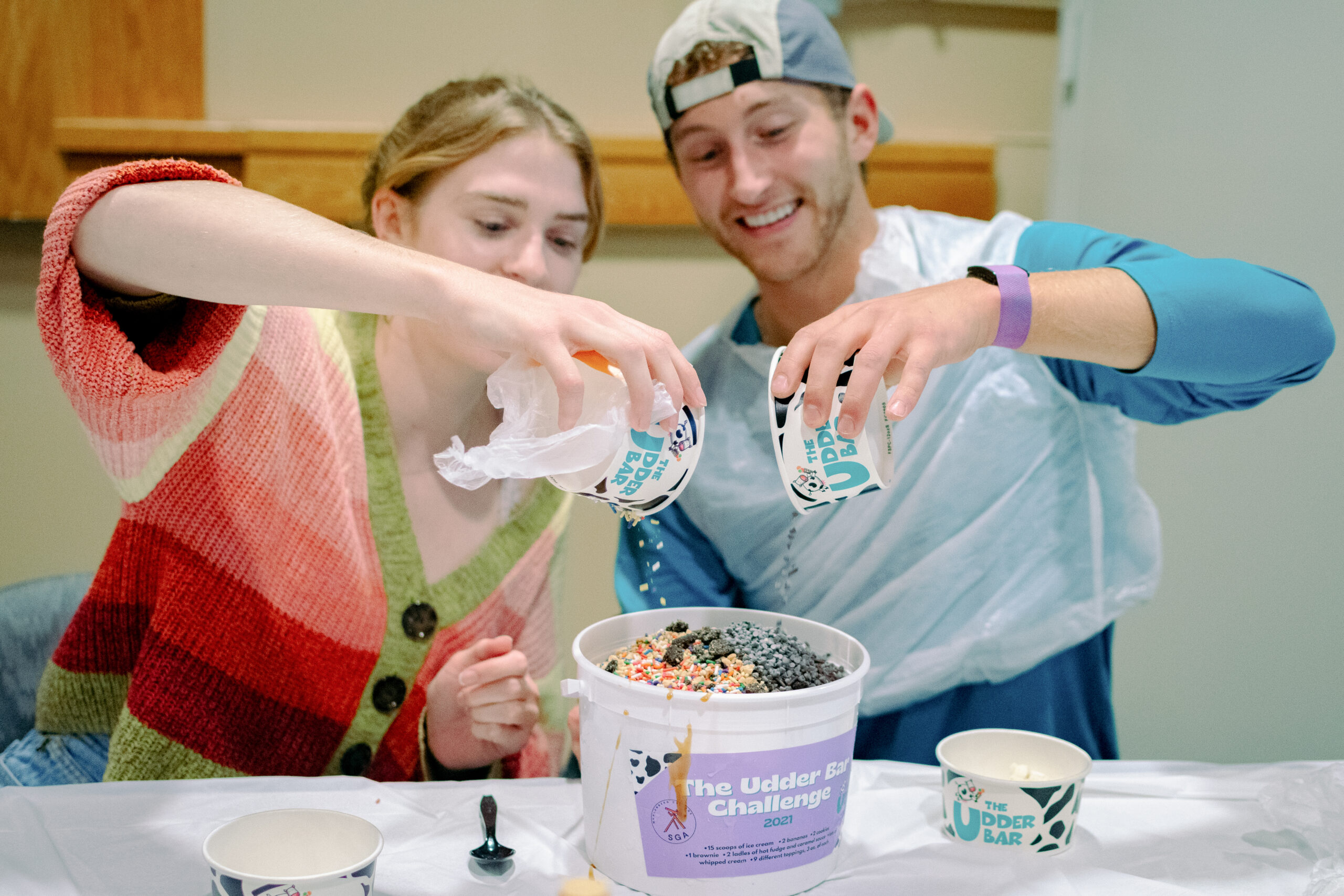 On Oct. 29, twenty eager pairs of students gathered in the Seegers Union Event Space to participate in Muhlenberg’s inaugural Udder Bar Challenge. The contestants battled it out to see who could be first to finish a monstrous 15 scoops of ice cream, two bananas, two cookies, a brownie and various toppings. Vegan and gluten-free options were available. The room abounded with strategies, some folks melted their ice cream, others tied garbage bags around their necks so they wouldn’t have to waste time reaching for it in case of an emergency.

Zaire Carter ‘22, Student Government Association (SGA) president introduced the event and shared the rules. Due to COVID, the contestants were not allowed to eat from the same bucket. Emergency Medical Services were present, and it was announced that if students threw up, they would no longer be able to participate. If participants violated any COVID guidelines, they had to freeze participation for two minutes. Members of SGA monitored the room, to ensure rules were followed.

SGA executive board members Danny Burden ‘23, treasurer, and Anna Connolly ‘23, recording secretary, conceived of the idea for the event.

Connolly said, “This past summer, Danny [Burden] and I finished the Ben and Jerry’s ‘Vermonster,’ which has always been a dream of mine. At the beginning of this semester, we were told about the Udder Bar Challenge, and immediately looked into it. We are very passionate about ice cream and thought that this would be a great thing to bring to Muhlenberg.”

Burden added, “I believe that ice cream is very good for your brain, and that everyone should enjoy it.”

Much thought went into the planning of the event. Burden shared, “Event planning is very challenging. I was very nervous in the days leading up to the challenge. We had a few scares the week of the event regarding policies, safety of competitors, as well as eagerly waiting for deliveries that were needed for the event.”

“I believe that ice cream is very good for your brain, and that everyone should enjoy it.”

Connolly added, “Any time that you are dealing with food, there are always challenges. We wanted to make sure that we were inclusive of all dietary restrictions and allergies. Vegan ice cream was a priority when planning the event and we made sure to provide accommodations for participants if requested. We were also very cautious of allergens and cross contamination when building the challenge buckets.”

Before the competition, students were excited for the task ahead.

Leah Toomey ‘24, who partnered with Tanner Klingenberg ‘23, said she was feeling, “Ready. I’m starving. We haven’t eaten all day.”

Klingenberg also felt good about the competition saying, “We have a strategy. We have a game plan.”

Some pairs weren’t quite on the same page. Lucie Hopkins ‘22 said, “We’re gonna lose.” Conversely, her partner Joel Hark ‘22 was confident about the challenge ahead. He said, “Our game plan: We’re gonna start fast, we’re gonna go fast in the middle, and we’re gonna finish fast.” Unfortunately, they did not finish fast.

The event kicked off at 3:24 p.m. Contestants launched into their buckets while crowds gathered at each table cheering them on. Families who had begun to gather for the upcoming Family Weekend also filled the room, and a long line of audience members eager to get their own scoops of Udder Bar ice cream formed. While a full hour was allotted for contestants, the winning pair polished off their bucket at 3:37 p.m., in just 13 minutes. Cameron Emam ‘23 and The Weekly’s own Assistant Sports Editor Tom Hiller ‘23 demolished their 15 scoops and the toppings. For those who did not finish their buckets, they were given a lid to take them home.

Burden and Connolly believe the event was successful. Connolly said, “We would love to hold this event in the future. We would ideally like to see it become an annual event that continues beyond our time at Muhlenberg.”

Audience member Alexandra Rivers ‘22 said, “I’ll be honest, going in, I was just nervous someone would throw up. But no one did, and I got free ice cream out of it, so I’d call it a lot of fun!”

The winners, too, enjoyed the event and were proud of their accomplishment.

Hiller shared, “I saw it as a fun opportunity… I wanted to prove that not only could I finish it but I could win. I had a lot of fun during the challenge; however, it certainly was an endeavor. Cam [Emam] and I both won 100 bucks in ’Berg bucks, a free T-shirt and a $25 gift card from Udder Bar. The only thing I’d change was how I felt after the challenge—I don’t wish what I went through to anyone.”

Emam was feeling good after the challenge. “Coming into the challenge, I was pretty hungry even though I just ate lunch. But I was pretty excited just because I got to eat some free food. Once the challenge started, it revealed my true love for ice cream and my inner Joey Chestnut came out. From there on out, it was just another day in the park. When me and Tom [Hiller] won, I remembered something one of my great role models once said, ‘undefeated, never lost,’-LaVar Ball. I live by those words every day of my life. I then went to dinner with my parents and ate again, it was a great day.”

Disclaimer: The Weekly and this author do not endorse competitive eating.