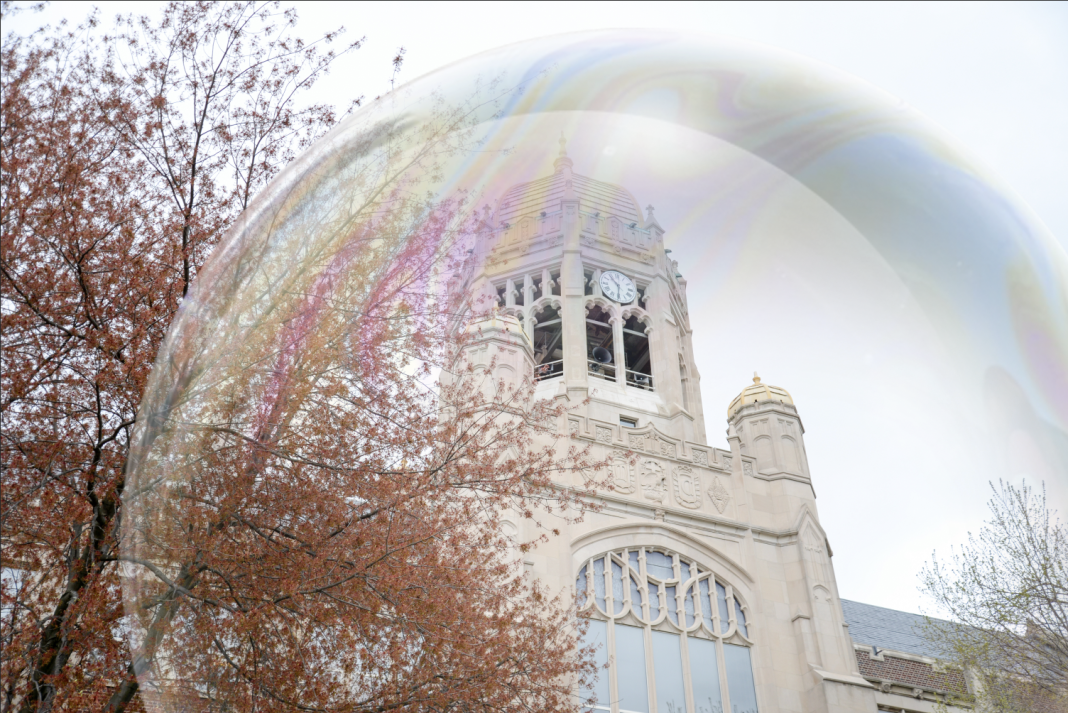 Step outside of Muhlenberg’s campus, turn down Liberty, head onto 19th Street and you’ll find Hava Java, a coffee shop with hand-painted tables, mugs of every color and pattern hanging from the ceiling, worn shelves packed with used books and local art on the walls. It’s the perfect college hangout, yet a Saturday afternoon stroll here is rarely met with the sight of many “Mules”.

“I’ve been surprised in the seven months that I’ve been here that we don’t get that many students here, and often when we do it’s usually with their parents,” said Crystal Diaz, an Allentown local and employee of the café.

What Diaz has noticed is often dubbed by students as the “Muhlen-bubble,” the disconnect between Muhlenberg and the Allentown community, a problem that separates, isolates and distances the college from its surrounding area.

It’s a theme which is central to the college, and because of this, the topic is featured in nearly each year’s Sedehi Diversity Project, a documentary piece of theatre that is shown to the college’s first-year students each fall semester.

“You don’t live in Muhlenberg, you live in Allentown!” said Melina Economos ‘19, who directed this year’s iteration of the Sedehi Diversity Project. The project evolves from year to year, aiming to foster dialogue about diversity on campus in all forms, from racial identity, to gender identity,  sexual identity, religious beliefs, economic background and everything in between.

Economos had the chance to meet with alumni of the Diversity Project during the process.

“They said, ‘over the 13 years of the project it’s unbelievable but so believable that people are still talking about the Muhlen-bubble because it hasn’t been solved,’” Economos explained. “So it has to be brought up every year because not everybody’s engaging with Allentown and not confronting their own conceptions of the Muhlen-bubble.”

Eveily Freeman and Beth Halpern, who serve as the directors of Muhlenberg’s Office of Community Engagement, agree.

Halpern and Freeman’s work is focused on creating meaningful partnerships between Muhlenberg students and the Allentown community, striving to create unity, equity and positive social change.

“I also think it’s part of a liberal arts experience to do something that’s not on campus,”

“I also think it’s part of a liberal arts experience to do something that’s not on campus,” said Halpern. “If you’re really trying to get a breadth of all of that’s around you and really trying to be this holistic, educated person, then you should be taking advantage of everything that’s here. And I feel like it’s a missed opportunity if you spend all of your time on campus and never do anything in the community.”

For students looking to branch out, community engagement is an important way they can create relationships with those outside the Muhlen-bubble, and many Allentown organizations are excited about forming these partnerships. “There are lots of people here that are looking to connect with students, that are interested and eager and also want to be a part of your education and recognize that they’re a part of it,” said Halpern.

Another effort on campus that aims to create connections between Muhlenberg and Allentown is a new theatre class, called Devising Community. The fall-semester class teaches students about the process of creating devised theatre, encouraging students to create meaningful collaborative performances as an ensemble. The class is working in tandem with the Allentown community to learn about the lived experiences of its immigrant populations in order to strengthen bonds between Muhlenberg and Allentown, and in the spring, this unique class will “make our theatre piece using our research to make performances that includes community stakeholders in acts of shared creation,” according to the class mission statement.

Leticia Robles-Moreno, who co-teaches the class with Matt Moore, said, “Deciding not to go beyond 17th Street because the landscape is ‘sketchy,’ deciding to ride the bus just once a week to go to specific stores and then come back to campus immediately afterwards, or taking our parents/visitors to posh restaurants and not to local family-run restaurants, all of these are decisions that affect the circulation of bodies in this area.”

It is imperative, Robles-Moreno believes, that students recognize that each action they take affects those around them.

“Believing that we are contained in a bubble that must be pinched is actually a way to escape from acknowledging our own role in processes of gentrification, displacement and erasure of communities that are connected to us more than we can imagine,” said Robles-Moreno.

“Believing that we are contained in a bubble that must be pinched is actually a way to escape from acknowledging our own role in processes of gentrification, displacement and erasure of communities that are connected to us more than we can imagine,”

Robles-Moreno hopes her students will learn to “counteract the individual mini-bubbles in which we try to protect ourselves from whatever we think is ‘dangerous,’ ‘different,’ or simply ‘unknown.’”

“You have to find what makes Allentown special for you,” said Economos, who is also a member of the Devising Community class.

“There are folks here that have been living here a really long time and are really committed to being in this place. There certainly is diversity present in lots of different ways,” said Halpern.

Over 51 percent of Allentown’s community, as Freeman explained, identify as people of color. “That is actually way more representative of our country and of the world, and it shows all of that nuance in ways that you don’t always get in other places for a lot of reasons. Historical and otherwise,” said Freeman.

This diversity, as Halpern explained, is an important factor in what makes Allentown special. “[Eveily and I] value the opportunities to connect with people who are different from you and to expose yourself, or for us, our kids, to things that are different and people that are different,” she said. “It’s important to our work. And connecting folks in community and to the learning that we believe is possible when you connect with folks with very different life experiences.”