Home News Opening doors to a new home or another world? 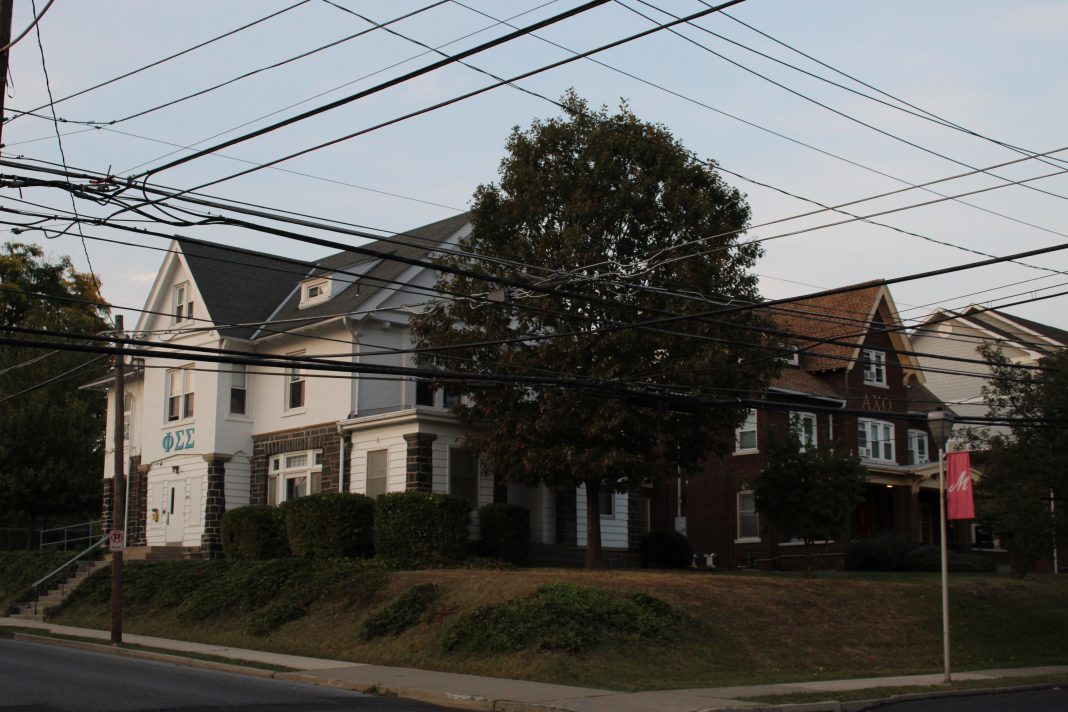 Molly McCarthy ‘22 had no idea what she was getting herself into as she and a group of girls knocked and anxiously waited outside the Red Doors.

Then, clapping, chanting and yelling, some 50 unfamiliar girls dressed in identical outfits presented themselves to McCarthy as she walked through the doorway. No, this wasn’t the beginning of a dystopian novel. This was the first of four days of sorority recruitment at Muhlenberg College.

“I was just standing there, waiting, internally freaking out,” said McCarthy. “They had us stand in a certain order, and I knew no one around me, but all of the girls seemed really nervous too.”

“Sororities are empowering. The part that tears down women is hazing”

McCarthy, like many girls this semester, decided to go through sorority recruitment to see if she would enjoy the process. McCarthy said she hoped this process would help her find a way to “make a small school bigger.” By the end of the week, McCarthy accepted a bid from Phi Sigma Sigma.

McCarthy described the Greek experience at ‘Berg as being less intense than she imagined.

“There is less pressure to be in a sorority [at Muhlenberg],” said McCarthy. “It’s just like a small community.”

Meredith Krewson ‘20, an active member of Alpha Chi Omega, said she didn’t even know she wanted to go through recruitment before coming to school. She had seen negative depictions of sororities in the media and heard horror stories from friends at big schools. Krewson now serves as the vice president of recruitment for the Zeta Chi chapter at Muhlenberg.

“I looked around the room, thought this is the room in which I feel I could blossom the most, the room in which I could be supported and empowered, because the women surrounding me exuded those characteristics,” Krewson said of her personal recruitment experience. Krewson said her sisters teach her how to be a “Real Strong Wom[an]”, as per the Alpha Chi Omega slogan.

“Sororities are empowering. The part that tears down women is hazing,” said McCarthy. “By removing that element, it becomes so much more positive on this campus.”

Hazing and other activities that have tarnished the image of Greek life at schools nationwide are banned at Muhlenberg. A firm anti-hazing policy has been put in place, which states that Muhlenberg “…ensure[s] that students are informed about the definitions and harmful consequences associated with hazing and know how to take an active role in preventing it from happening within their social settings.” Muhlenberg recently shut down the chapter of Sigma Phi Epsilon after hazing accusations surfaced in November of 2017.

“Hazing is such a huge concern, as it should be. It’s so problematic that it’s still occurring, especially with the recent deaths caused by hazing,” said Krewson. “It shouldn’t be a question in anyone’s mind whether it’s OK or not; it’s just not.”

According to Berg’s Anti-Hazing Five Year Institutional Report, the college has had eight reports of hazing accusations since 2014. Five of these accusations come from panhellenic organizations but were “unfounded as hazing.” The other three were from fraternal organizations; only Sigma Phi Epsilon’s report is confirmed.

“Hazing is such a huge concern, as it should be. It’s so problematic that it’s still occurring, especially with the recent deaths caused by hazing”

Many schools in the Lehigh Valley have also experienced issues of hazing. Though many accusations have come from fraternal organizations, reports of intense sorority hazing at Lehigh University came from their chapter of Alpha Chi Omega. As a result of the recent hazing accusations from the organization, the Alpha Chi Omega chapter at Lehigh University was dissolved and banned from campus from December 2017 until June 2020.

According to NBC, nationwide, 44 states have passed laws prohibiting hazing. Despite these anti-hazing laws, only 10 states consider hazing a misdemeanor or possible felony, and Pennsylvania is not one of these 10.  According to an article in The Morning Call, Pennsylvania’s Timothy Piazza Anti-Hazing Law requires all higher education institutions to post all violations of anti-hazing on their websites and allows sorority or fraternity houses to be confiscated for promoting and/or participating in hazing.

Arianna Tilley ‘22 did not go through the recruitment process, but still has a positive opinion of sororities at Muhlenberg. Tilley had never heard of any Muhlenberg sorority hazing and does not believe that it is something that prevents students from going through the process. She said she knows a lot of people in sororities, and thinks they all seem really friendly.

Though it has only been three weeks since Bid Day, McCarthy said she feels supported in every aspect of her life by her new sisters of Phi Sigma Sigma.

“I’m looking forward to getting really involved in our philanthropy,” said McCarthy. “I’m just excited to get to know more people and expand what can feel like a tiny campus.”