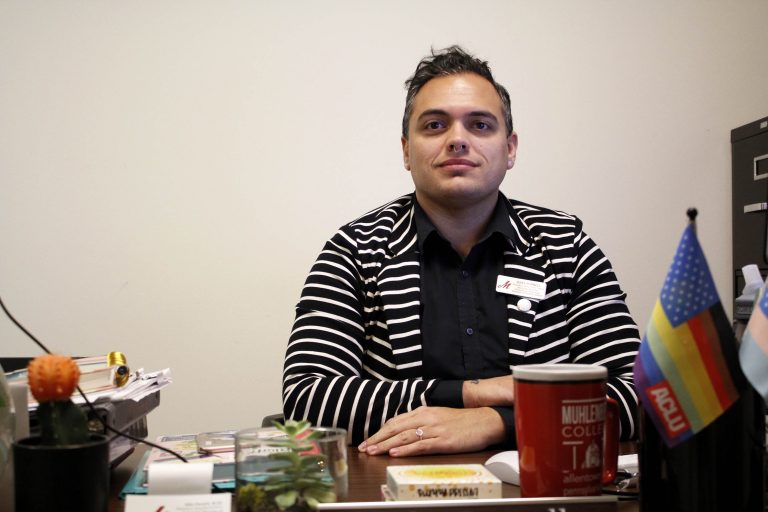 This year, Muhlenberg is expanding its prevention education by educating students on sex and building a culture of nurturance on campus. Jules Purnell, the new Associate Director of Prevention Education in the Office of Title IX and Equity, is heading many of these efforts.

Last Friday, Purnell, along with Assistant Professor of Biology Dr. Jordanna Sprayberry, gave a talk entitled “Beyond the Birds and the Bees.” Dr. Sprayberry spoke about the biological components of sex and gender, and Purnell held a discussion about body safety and the importance of consensual, mutually pleasurable sex.

Purnell explained their role and goals for Muhlenberg, as well as the importance of sexual education on a college campus.

“I think there’s been a lot of conversations about Title IX and Me Too and how we’re going to respond to sexual assault,” said Purnell. “My role is really to prevent that from happening in the first place…what I really feel charged with is giving students the tools and information to have healthy and pleasurable sex lives so that they don’t have to stumble around in the dark and figure it out for themselves…to make informed decisions. They often times just learn by screwing up, and [that] is a really bad way to learn.”

“There’s a lot of really great resources that exist on campus, and the sense that I am getting is that a lot of students don’t know of them, which is really a shame.”

Furthermore, to ensure students are leading healthy sex lives, Purnell and their team of Voices of Strength members, who are peer educators, have posted sex tips and informational posters about nurturance culture around campus.

“I feel like we’re inundated with really terrible sex tips all the time, especially if you’re in the supermarket and you see tabloid magazines that are all focused on male pleasure,” explained Purnell. “But it doesn’t ever ask what knowing your own needs looks like, so I think it is really important to emphasize knowing what each person wants.”

The conversations held last Friday had a significant impact on Muhlenberg students.

“I thought the event on Friday was very informative and important for students to attend,” said Cydney Wilson ‘23. “The presentations of Jules Purnell and [Dr.] Jordanna Sprayberry shared information that many Muhlenberg students may not have been familiar with before, and I enjoyed learning from both speakers.”

Students have also noticed the new sex tip and safety posters hung up around Seegers Union.

“I think it’s really nice that they have these posters around campus because it reminds people to never feel pressured and encourages them to reach out,” said a student that chose to remain anonymous.

Another anonymous student stated that, “The posters give a really good message. I especially like the one that says ‘If you don’t feel like doing it don’t do it.’”

It is Purnell and the Office of Title IX and Equity’s role to ensure that students feel safe on campus and that the school is void of any sexual misconduct, as well as to ensure healthy relationships, equity and inclusion.

“There’s a lot of really great resources that exist on campus, and the sense that I am getting is that a lot of students don’t know of them, which is really a shame,” said Purnell. “In the Health Center you can get tested for STIs at any time…I also offer condoms in my office as well, so if you want to come visit me, I am in the basement of Seegers, behind where the printing machines are. There’s also the counseling services, which are fantastic. About half of the students that are on Muhlenberg’s campus do go through counseling services at some point.”

In addition to these existing resources on campus, Purnell is working hard to get more projects out there.

“The sexual assault response team, right now, is made up of staff members and faculty members who really want to help students navigate some of these topics a little bit better,” said Purnell. “Previously, it did exist and it was a really helpful resource, but over time the positions have just shifted and people aren’t so sure what their roles are anymore. So this year I’m really working on getting that back up and running so that there’s one more resource [for students].”

“I invited a men’s organization; they are a queer men of color fraternity,” said Purnell. “They are going to come and talk about healthy relationships…That is going to be during domestic violence awareness month, so I thought it was really important to have someone come and speak from a queer men’s perspective, because we also don’t hear about that very often.”