Home News March for our lives 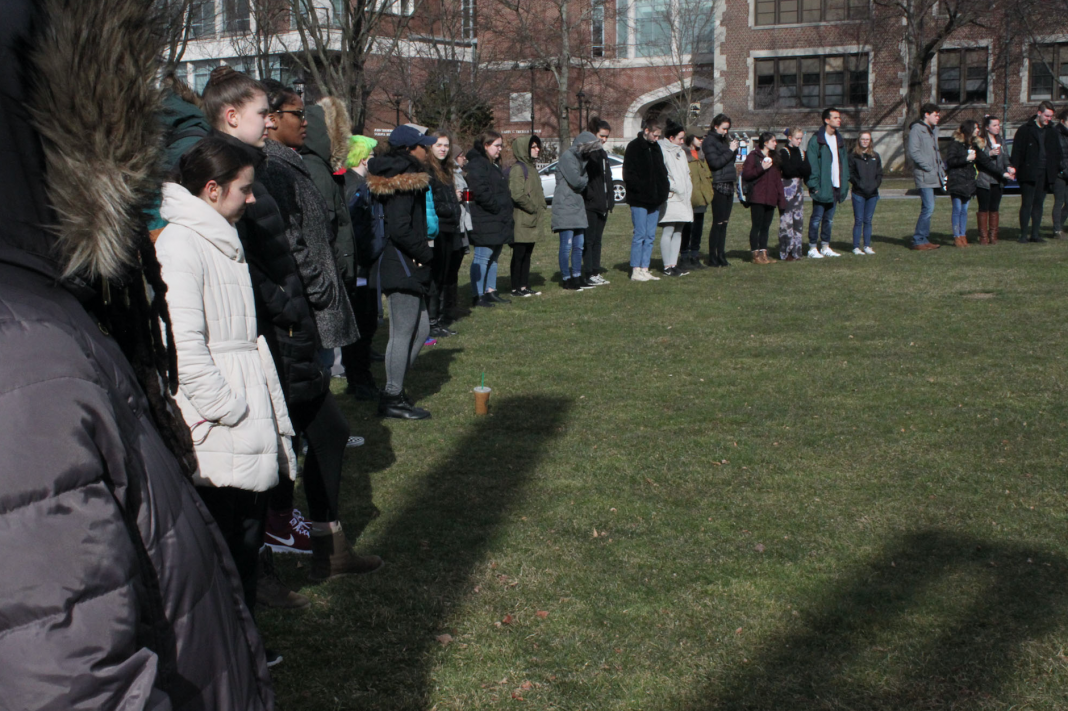 Since the tragic shooting of seventeen victims at Marjory Stoneman Douglas High School in Parkland, Florida on Feb. 14th, Muhlenberg has seen a surge in activism surrounding gun control and the #NeverAgain movement.

With two previous walkouts since the shooting — one on Feb. 21 and another on Mar. 14 — the momentum of activism will continue once again on Saturday, Mar. 24, when transportation will allow for a limited number of students to attend the March For Our Lives rally in Washington D.C.

Robin Riley-Casey, the Director of Multicultural Life, introduced the idea to have buses take students to the march almost immediately after the Parkland shooting happened: “If the students wanted to do it, I would do everything that I could to advocate for it.”

After gaining support from Multicultural Life organizations such as Students for Queer Advocacy (SQUAD) and Muhlenberg Trans Advocacy Coalition (MTAC), Riley-Casey began working with student leaders from these two groups in order to make the idea of a trip to the march a reality. The Dean of Students Office will provide additional financial support for the upcoming trip to the march.

“Most of my involvement with the planning of the transportation to the march has been outreach to various Facebook-based Muhlenberg activist groups that have formed independently from Multiculti over the past four years,” said Paige Harrington ‘18, one of the main student leaders. “I created the Facebook event for the march as well as the Google form for registration.”

Students interested in attending the march were required to fill out the Google form in order to obtain a spot on one of the two buses; however, registration is now closed.

“There have always been activists on this campus, people doing amazing things through different clubs, organizations, talking with professors, administrators.”

Another student leader that was heavily involved in the planning of previous walkouts and the upcoming march was Alexa Urbach ‘18, the current president of both SQUAD and MTAC.

“When I first got here in 2009, before I even got here, they [students] had planned to go to the inauguration [of former President Barack Obama],” Riley-Casey said, pointing out how activism has been prominent on Muhlenberg’s campus in recent years. Whereas only two buses were available for this year’s trip to D.C, she reflected that “at that time, they had I believe seven buses.”

Besides the inauguration, there was also transportation to last year’s Women’s March. Kieva Mark ‘20, another student activist, also recognizes the presence of activism embedded in Berg’s culture. “There have always been activists on this campus, people doing amazing things through different clubs, organizations, talking with professors, administrators.”

“I think what makes it [attending the march] so significant is students. It’s students, It’s not about adult folks that are 25 and older, it is about young people knowing that they have power to create change in a world they want to live in.”

Mark has also noticed a positive change, “I was talking to Paige and they were saying that they hadn’t seen a protest of this scale at Muhlenberg … it’s definitely increased since Parkland.”

Despite seeing a boost in activism for gun control, Urbach acknowledges that change takes time — which is why many people involved in activism on campus see the importance of attending the upcoming March For Our Lives.

“I think what makes it [attending the march] so significant is students. It’s students, It’s not about adult folks that are 25 and older, it is about young people knowing that they have power to create change in a world they want to live in,” said Riley-Casey. “It is not about gun control necessarily, it is about actually activating their voices to say that ‘we will be the ones who will create the spaces that we will live in.’”

Urbach had a similar view as Riley-Casey: “I think that the experience of being surrounded by people who have similar opinions and are outspoken and are very dedicated to that cause … even if you feel that you are not the most invested. It is inspiring.”

One potential issue with attending a march, especially one at the magnitude of March for Our Lives, is hesitation and fear. “It is nerve-wracking and scary, but if you are passionate enough about something, that takes over to some extent,” explained Mark, “that has definitely gotten me involved in gun control.”

“I think that if people are afraid, pay attention to that because the world can be a scary place,” Riley-Casey adds. “I think that knowing that there are so many people that are going to be there in solidarity with one another, that says power in coming together.”

It is also important to realize that attending a march is not the only way to participate in activism. “You don’t have to go to a march to be knowledgeable about issues,” says Allison Gulati, Dean of Students. She encourages students to reach out to the Office of Community Engagement to discover ways to get involved right here in Allentown.

“Depending on where students’ interests lie, we can connect them to community organizations/movements that might fit,” said Beth Halpern, Director of Community Engagement, “For example, we have connected students with interest in reproductive rights to Planned Parenthood and the Allentown Women’s Center. Students with interest in food insecurity have connected with Second Harvest Food Bank.”

For more information on how to get involved in activism, or if you are interested in attending local marches in and around the Lehigh Valley, you can contact the Office of Multicultural Life. Overall, Mark summarizes activism into three main aspects: “Know your history. Know where your ideas and your passion are coming from. Don’t let go of your anger.”