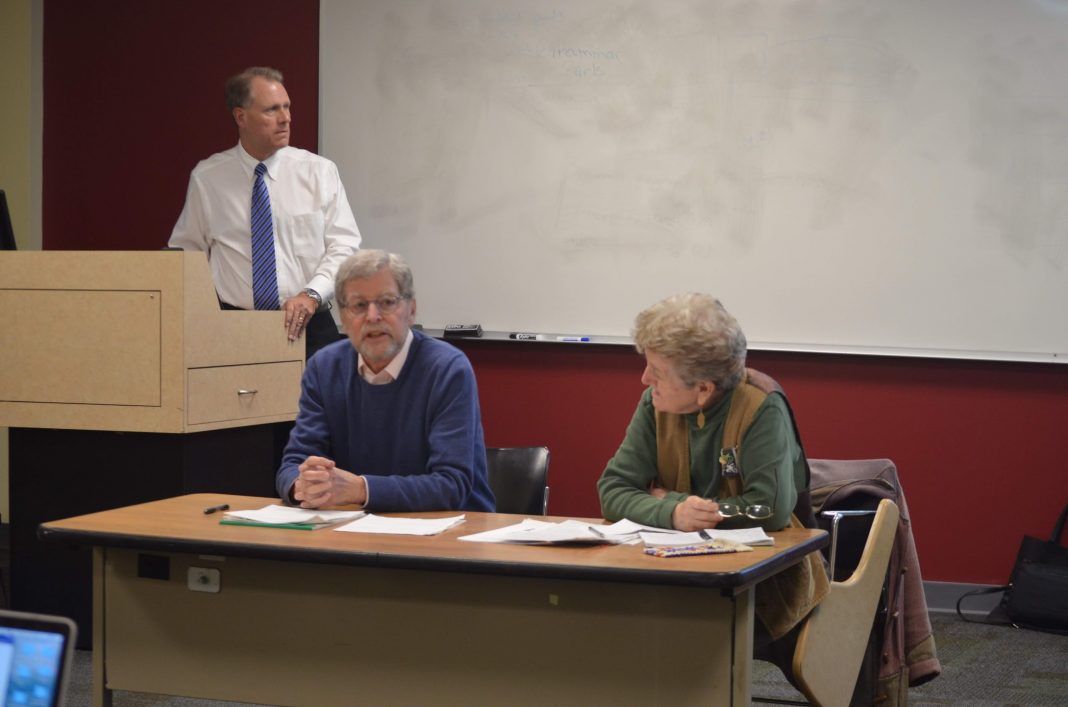 “LEPOCO, the familiar acronym for the Lehigh-Pocono Committee of Concern, has, over the past 10 years, become an organization known to thousands, loved by many and despised by more than a few,” the LEPOCO website proclaims. This despisement is what led Nancy Tate, founder and coordinator of the group, and Don Miles, attorney and board member of the Pennsylvania Sierra Club, back to ‘Berg’s campus on Oct. 24.

As a part of the class Writing for the Media, Professor David Erdman asked Tate and Miles to speak on their involvement with “The Muhlenberg Five.” In 1976, Tate was one of five members of LEPOCO to be arrested outside of Seegers Union. Tate recalled, “We were arrested, handcuffed and taken in a paddywagon.”

The group was protesting then-FBI Director Clarence Kelly, who was on campus speaking at a public symposium. Following their arrest, Miles became the Five’s defense attorney — pro bono — and eventually argued and won the case in front of the Pennsylvania Supreme Court.

Tate explained that the group was protesting Kelly “because of the pattern of FBI abuse and disregard for citizens’ rights” and that LEPOCO was “concerned about the hypocrisy of the FBI.” She and Miles both expanded on the political climate at the time — America was still living in the wake of Watergate, Nixon’s resignation and the end of the Vietnam War — and how many activist groups had wrongly been put on FBI watch lists without their knowledge.

Sharing a memory from law school in the shadow of Watergate, Miles said, “We had concluded that if the Supreme Court didn’t order the tapes, it meant the rule of law was over, and we wouldn’t continue our legal career because it meant that Nixon had become a dictator. That was in 1974.” He and Tate both admitted to having been considered “far left,” with Miles mentioning his own activist involvement as an undergraduate at Lehigh University. “We weren’t hippies, but we were radicals at the time.”

After speaking about the events of the arrest itself, most of which were chronicled in The Weekly at the time, Tate and Miles turned towards the case. Tate and her companions were charged with defiant trespass and found guilty at lower courts. Miles explained that the Pennsylvania Supreme Court overturned these rulings; upholding the right to free speech in this instance outweighed the right to private property that Muhlenberg argued they had, and “at the age of 31 [Miles] had established new law in front of the Pennsylvania Supreme Court.”

“The goal should be…making sure everyone has the ability to engage in a community and speech is important for that. You want to be cognizant of speech that automatically excludes people”

“The constitution sets a floor, not a ceiling,” explained Dr. Ross Dardani, who teaches Constitutional Law classes in the political science department. “[The state] can provide more protections than are stated, or you can restrict certain speech.”

When it comes to student speech codes Dardani explained that most colleges, and especially public schools, restrict first amendment rights. “When and if [college speech codes are] tested, they’re going to be deemed as unconstitutional.” Still, Dardani admitted that with a private school such as Muhlenberg, the constitutionality of these codes are different.

Dardani said that the reason most of these codes aren’t challenged is that the speech they limit is what most consider to be hate speech. “Most students recognize that there’s really not even a negligible reason for why hate speech is considered free speech.”

“The goal should be…making sure everyone has the ability to engage in a community and speech is important for that. You want to be cognizant of speech that automatically excludes people,” Dardani said. “If all the speech is designed to exclude, belittle, marginalize, subordinate, what benefit does that provide?”

The Muhlenberg Five case and the subsequent expansion of free speech is what protects Muhlenberg students during protests both on campus and throughout Pennsylvania. Though the debate over what constitutes free speech rages on, it is clear that the fight for expanded rights, begun at a small liberal arts campus in Allentown, continue to have a lasting effect.