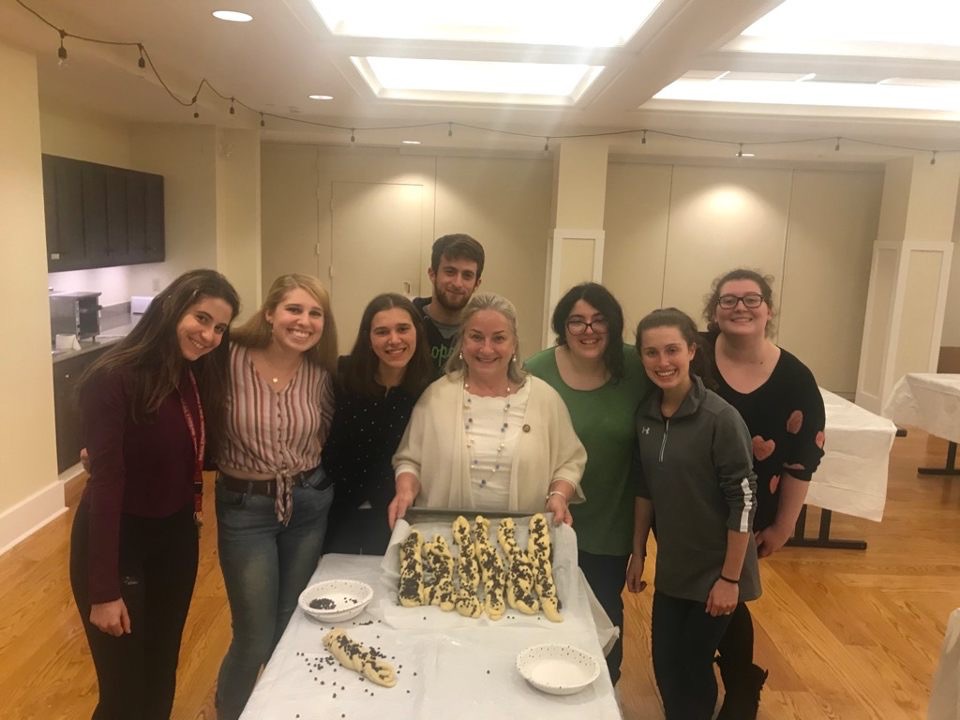 Susan Wild, congresswoman for Pennsylvania’s 7th congressional district (Muhlenberg’s district), visited Muhlenberg’s Hillel House for “Baking with Representative Susan Wild” an event sponsored by Challah for Hunger and BergVotes. In addition to baking challah with students, Wild discussed her views on food insecurity and how she is working to combat the issue as a policymaker and its relation to her position on the Committee of Education and Labor.

At the event, Challah for Hunger co-presidents Gabriela Solomon ‘20 and Natalie David ‘22 explained the mission of the organization.

“We are a part of over 80 Challah for Hunger chapters nationwide with a common mission for social justice and a passion for baking,” explained Solomon.

“Food insecurity is defined as being unable to consistently access safe and nutritious food,” David elaborated. “It is an issue that affects millions of college students across this country every day. Currently studies show that 40 percent of four-year university students and 50 percent of community college students are food insecure. Through Challah for Hunger, we hope to raise awareness for this issue, as no student should have to choose between textbooks and food. Today all the proceeds will go to Mazon, a Jewish [organization responding] to hunger, as well as the Jewish Family Service (JFS) of the Lehigh Valley. Any challah that we do not sell will be donated to our very own MULE community cupboard as well as the JFS food pantry.”

Allison Kaye ‘21 is the Vice President of BergVotes, a nonpartisan group of students trying to raise political engagement and awareness at Muhlenberg.

In the nature of this event, which focused on food insecurity in the Lehigh Valley, David asked, “What would you say to those who tell college students to ‘just eat ramen’ when faced with food insecurity and financial hardships?”

Wild responded saying, “Anecdotally, I ate a lot of buttered noodles with salt and pepper when I was in college … It was cheap, it was filling … But it’s not an answer. I really became keenly aware of food insecurity issues not nearly long enough ago, it kind of started around the focus on public schools and the lunch shaming issue of kids who couldn’t pay for their lunches…When I started hearing about these policies that some schools have of not providing the same lunch to a student because of a school lunch debt, I was frankly appalled, and I think that’s when the issue first really came home to me.”

Today, Wild focuses on food insecurity in her policies and in her personal life.

“To people who suggest, ‘Just eat ramen,’ ramen fills your stomach, but it doesn’t do a lot for your health; there’s no nutritional value, and it doesn’t create the right kind of body and mind that you need for your studies, so I think it’s an inappropriate response, even having had lots of buttered noodles in my time.”

Wild also spoke about her opinion of programs like SNAP, the Supplemental Nutrition Assistance Program.

“I’m grateful that there are programs like food programs on campuses,” she said. “I am really, really happy those programs exist, but I find it unfortunate that they need to exist. Because in reality … it’s one thing to be there to help fill a gap. It’s another thing to be the primary source of nutrition for students, or for seniors, or for people in need.”

Wild added, “I do think we need some sort of food security program that benefits people in need. I’m not suggesting that we should start providing taxpayer-funded meals for every person who is on a college campus by any means, but I think to expect people to advance their education, and we know that any kind of higher education increases your wages and your productivity for the rest of your life … not just a four-year college degree, but any level of higher education makes people more productive; it makes people earn more money and in turn build our society and our communities.”

“To people who suggest, ‘Just eat ramen,’ ramen fills your stomach, but it doesn’t do a lot for your health”

Wild addressed how her perception of food insecurity on college campuses has changed over time.

“As much as I had thought about food insecurity in public schools meaning elementary, middle and high schools, until I was an elected member of congress and started doing tours of the college campuses, it never really occurred to me,” said Wild. “I had been food insecure myself when I was in college, but I didn’t ever think of it that way. I just thought of it as one of those struggles that college kids go through.”

“We’ve got first-generation college students across the country who are trying to break out of whatever their family mold is and pursue their education, and to suggest that it’s their problem if they have food insecurity issues I think is really blatantly wrong.”

“It’s all part of a bigger problem,” said Wild. “The cost of college education has gone up tremendously since I was in college in the late 70s … Student loan repayment terms were much more favorable then, nobody paid interest on their loans while they were actually in school…The idea that we are taking the youngest members of our society who are entering the workforce and saddling them with the most oppressive loans and the most oppressive loan rates is really unconscionable.”