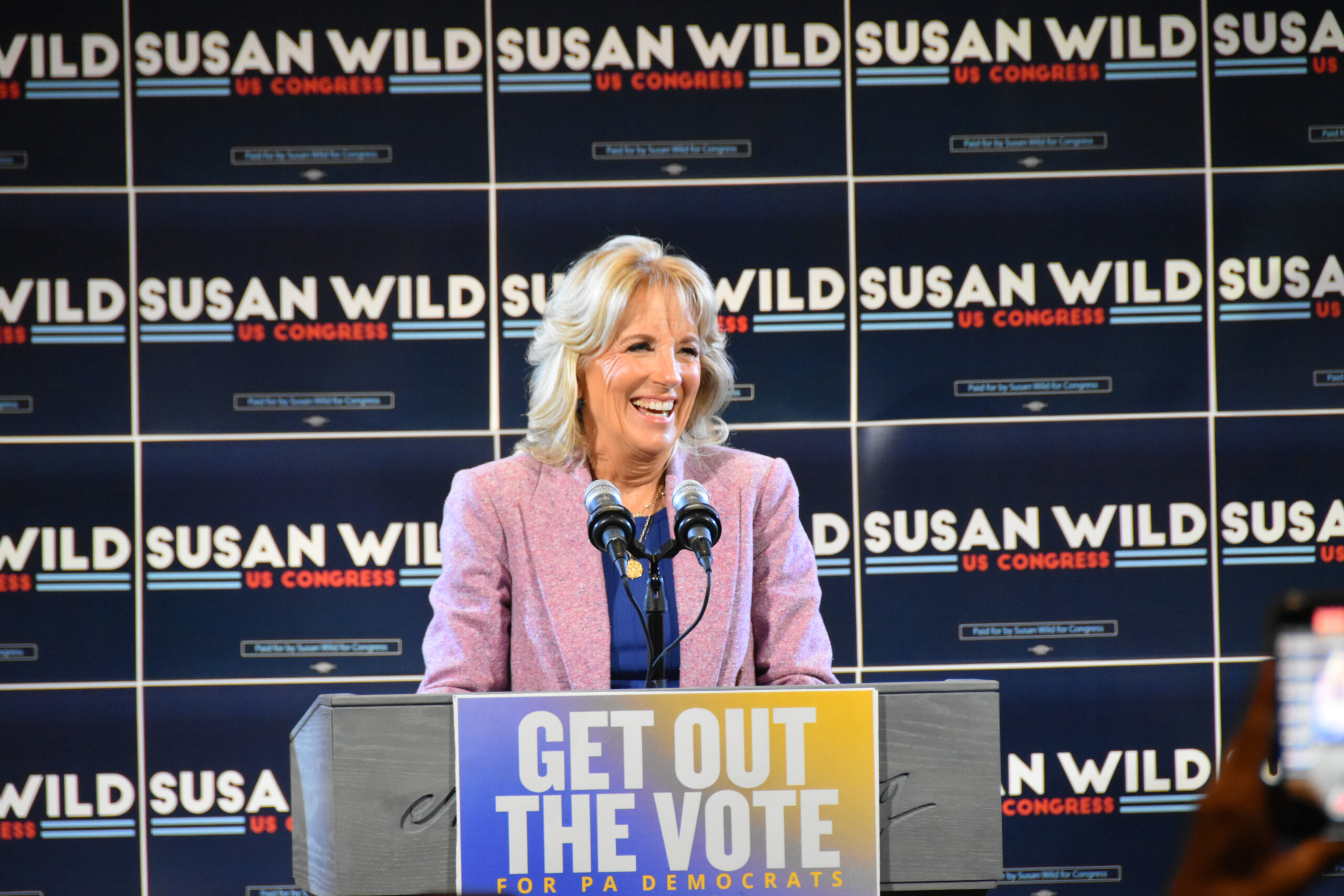 “This is the most important election in your life,” said Congresswoman Susan Wild (PA-07).

This was the sentiment echoed throughout the walls of Miller Forum the night of Wednesday, Nov. 2, 2022. Muhlenberg College hosted First Lady Jill Biden EdD, along with Wild and Congresswoman Madeleine Dean (PA-04). The student body was informed about the event less than two days prior by the Office of Communications. Tickets were required to enter the event, but only a small amount were allotted to students by the Muhlenberg College Democrats, the student group that sponsored the event.

Dean was the first to speak, sharing how inclusion in politics has changed in the few short years since she began her congressional career. “Susan and I met back in 2018 when we both first ran for Congress. There were no women in the federal delegation. Imagine that, not a single woman,” said Dean, whose words now juxtapose the powerful image of three women on a stage in front of a room full of supporters.

Wild took the stage second and spoke of her views on healthcare and the importance of upholding government programs like Medicaid. “Starting in January, insulin will be capped at $35 a month… and starting next year the total annual out of pocket cost for prescription drugs for senior citizens will be $2,000,” said Wild.

“There were no women in the federal delegation. Imagine that, not a single woman.”

In perhaps the most anticipated speech, Biden capped off the night with a speech on the importance of voting. She referred to voting as an item on a to-do list with one clear sentiment: “Will you be able to get to the polls? Or will voting be the thing that just doesn’t get crossed off of your to-do list? What Pennsylvanians do on November 8 won’t just set the course for the future of your state. You’ll decide the future of our country as well.”

When speaking with students, the reception of the event was extremely polarized.

Isabelle Peters ‘24 said, “I honestly was really blown away. I was very overwhelmed and just in awe. The energy in the room was cool, but when they actually came out, it was like, whoa, they’re real. They’re real people. It was awesome.”

Emily Orlich ‘24 was also enthralled by the event. She said, “I thought it was very fun, informative and empowering.”

Matan Kogen ‘23 had a different experience. He countered, “I feel like it was a bit overblown. I was also really frustrated that they kept us all standing there for an hour and a half before they came out.”

Isaac Shulman ‘25 noted, “Although it was a cool event to attend, I felt like it was lacking in substance. Between the stress of figuring out if it was possible to attend the rally and waiting over an hour for it to start, I was disappointed in the brief speeches all three guests made.” Shulman was one of many students who waited online with the general public to attend the event.

While impressions regarding the execution of the event were mixed, students seemed united in their appreciation that the event itself was able to occur on campus grounds.

Aviv Campbell ‘23 expressed how she was pleasantly surprised by the Wild campaign choosing to have their event on Muhlenberg’s campus. “It was really cool. It was so unexpected. I was  like, ‘why would they choose Muhlenberg?’ We’re such a small school. Of all the places, I was surprised that it was here. If I was a[n underclassman], I would hope to see more events like that.”

Noah Berger ‘24 felt very proud that Muhlenberg was used as the venue for the rally. “I think it showed that even in a small liberal arts school, under 2,000 people, we can really have active roles in politics and be an active political community. Having a speaker like Jill Biden as the main headliner in this event showcased [Muhlenberg] to our [greater] community [as] an active political campus. I feel like it gave us some great coverage on that front.”

Kogen added that the convenience of the location was a factor in his decision to attend the event. “I liked that it was on campus, I think if it had been anywhere else in the Lehigh Valley, I probably wouldn’t have bothered to go.”

Students like Kogen and Berger expressed disappointment at the use of Miller Forum for the location of the rally rather than a larger venue on campus. Unfortunately, the realities of dealing with powerful political figures and the Secret Service limited the spaces that could have been used for the event. All classes in Moyer Hall the day of the event were moved to other spaces on campus so the building could be fully cleared for security purposes.

Campbell emphasized that she really enjoyed the small scale of the event. “I liked how intimate it was cause I thought I was gonna be standing really far away from her. But I still could see and it felt like I wasn’t just standing in the back of a stadium. It kind of made sense that they didn’t want everybody and their mother to come.”

Peters reflected on the limited tickets provided to Muhlenberg students. While she and Kogen were able to get tickets through their involvement in Muhlenberg College Democrats, she admitted that she wished there was more of an opportunity for a larger audience at the event.

“I kind of wish that they had opened it up more to the student body just because I know a lot of people would have benefitted from the talk and probably liked what Susan had to say. But I do think that the intimacy was necessary just for security reasons with Jill Biden. But overall I think that I would’ve preferred it if it was in the Event Space or somewhere bigger,” Peters mentioned.

Students were under the impression that this was a closed event, but as Campbell, Berger and Shulman learned, the rally had a general admission line that ran from Moyer to Chew Street and contained up to 200 people.

“I kind of wish that they had opened it up more to the student body just because I know a lot of people would have benefitted from the talk and probably liked what Susan had to say. But I do think that the intimacy was necessary just for security reasons with Jill Biden.”

Berger commented, “I could probably say that 10 or 15 of my friends were waiting in that line as well and they all got in.”

The consensus among students who attended the rally noted that while the event didn’t change their opinion of Susan Wild, it certainly taught them more about her.

Peters said, “I’m not from Pennsylvania, so I didn’t have a super strong opinion of her one way or the other, but hearing about her platform and hearing especially about her interest in healthcare and reforming healthcare, especially for diabetics with insulin was really inspiring and I honestly got a little emotional.”

Campbell spoke more on her impressions of Wild noting, “I really didn’t know much about her before this event. She was standing outside in line greeting all of us as we came in. That was really nice because I actually got to meet her and then, during the event she was a really strong speaker and like I got to hear about her policies and some of the stuff that she’s done in the past.”

Whether or not students were able to attend a campaign event during this election season, The Muhlenberg Weekly hopes that all eligible took the opportunity to vote in the midterms.

Like Berger expressed, “As a college student, it’s my civic duty to attend these types of events and hear what these political leaders have to say, especially attending college in a swing state like Pennsylvania.”