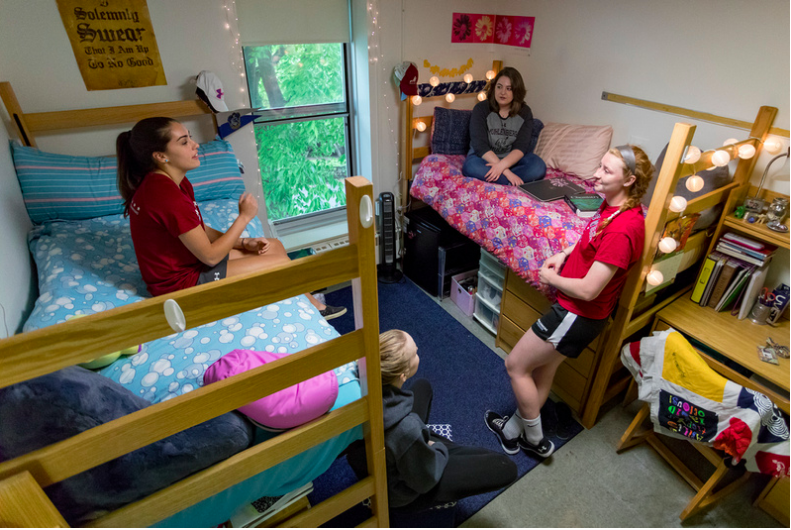 Affectionately known around campus as “Dirty Prosser,” many would also consider Prosser Hall to be the residence hall most in need of a significant update. As of right now, it is the only residence hall without air conditioning and houses the greatest amount of first year students in the smallest-sized rooms, compared to the other freshman dorms, Walz and Brown.

According to the Campus Safety notes from Sept. 10-23, six out of 20 sick students on campus were all in Prosser, three out of the five alcohol violations occurred in Prosser, in addition to two reports of vandalism and two reports of harassment and disorderly conduct.

“[There’s a] bond between everybody… especially back in the summer when were all dying of heat exhaustion. It forces you to visit other people’s rooms who have AC,” says Dominique Karanfilian ’22, who currently lives in Prosser. “It’s got a lot of character. There was a mysterious yellow stain on the wall not that long ago.”

While students who live in Prosser are aware of its nickname and reputation of being “Dirty Prosser,” the general trend seems to be that students seem to be making the best of the situation.

“It was a lot of fun just because of the community in Prosser,” says Mia Shmariahu ’19. “Now that I’ve lived in other housing, I’ve realized how small and dirty and crowded Prosser is. And the fact that it didn’t have AC was really rough. There were crabs in the common room. There was an actual STI that was spreading because of how crowded Prosser was.”

Prosser is currently at the top of of The Strategic Planning Committee’s proposed projects list within the next five to 10 years. According to the Proposed Phasing Strategy, the college first plans to construct a new upperclassmen suite-style residence hall next to the library that will include a retail center and a parking garage. Once that is completed, they will then begin a full renovation of Prosser, which will entail the addition of a fourth floor, moving the laundry rooms up and making more common spaces.

“The plans for Prosser this summer are to air condition Prosser. We didn’t want to wait and it’s a good semi-temporary solution to put air conditioners in the windows,” says David Rabold, Capital Projects Manager. “The permanent goal would be to renovate it so it’s like East Hall with a fan coil that provides heat and cooling.”

Current fundraising efforts are being directed towards the construction of the new building, as it is already financially feasible to insert window units into every room of Prosser.

“All of the planning includes Prosser being renovated to improve its standards,” Rabold says.

As of right now, the college has already re-painted, re-carpeted and replaced the lamps in the hallways.

There is also an initiative to replace the doors over the next five years. However, only 15 to 20 doors can be replaced at a time, as the primary efforts will be directed towards installing air conditioning units, which requires the addition of more power capacities in the building.

For some, the updates done over the summer have already improved the atmosphere in Prosser.

“The way that they redid it made it look more youthful,” says Karanfilian. But it has also made others skeptical of Muhlenberg’s intentions.

“What efforts?” says Shmariahu. “Was that really the top priority?”

Additionally, there is also the concern of where students will live once these renovations actually take place. It is no secret that the college has recently experienced a housing shortage, as evidenced by the need to erect The Courts, a temporary housing structure. This concern will ideally be addressed with the new residence hall.

Prosser will likely be renovated one side at a time, and students who would live in the side under construction will go into Walz, Brown or Taylor. Those upperclassmen who would have lived in Taylor or Brown will then have more of an opportunity to live in a suite-style setting.

Though the renovations of Prosser are much needed, for many past students who have gone through Prosser, the new building will be bittersweet.

“I feel like Prosser was an initiation process,” says Shmariahu, “so there’s a small part of me that’s sad that freshmen won’t have to go through what we went through.”

What to expect from Senior Days and Commencement Weekend