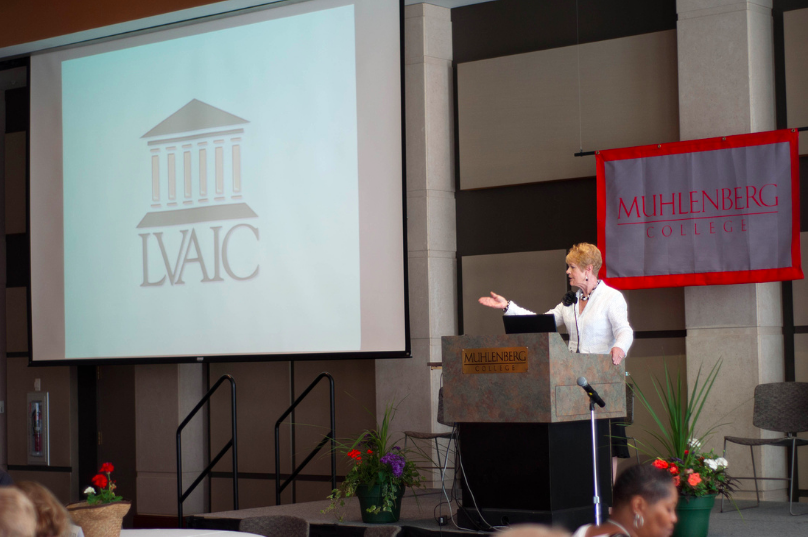 On Saturday, Oct. 27, Muhlenberg will be hosting the Bridging the Gap Student Leadership Conference from 8 a.m. to 5 p.m. in Seegers.

This annual event is sponsored by the Lehigh Valley Association of Independent Colleges (LVAIC) Coalition of Diversity Administrators, specifically, those from Muhlenberg, Cedar Crest, Lehigh, Lafayette and Moravian. It travels around the Lehigh Valley; last year, it was hosted at Cedar Crest, and next year it will likely be held at Lehigh University. This year, our own Director of Multicultural Life Robin Riley-Casey is serving as the chair of the conference.

The conference initially began with Lehigh and Lafayette as a way to combat the rivalry between the two schools, specifically for students of color.

“And then they thought, what about all the other institutions who may never get a chance to meet?” says Riley-Casey. “[It] could be expanded to all the Lehigh Valley schools. The way it starts to begin to expand is to reach out to the various multicultural life directors around the Lehigh Valley and say ‘what kinds of things do your students need, that we can help to support an engagement through networking opportunities?’”

“The way it starts to begin to expand is to reach out to the various multicultural life directors around the Lehigh Valley and say ‘what kinds of things do your students need, that we can help to support an engagement through networking opportunities?’”

They have discovered that the best way to support students from marginalized communities is to offer the opportunity to supplement what one might have at one’s own institution, by taking advantage of what other institutions have to offer. The conference then continued to evolve to become a space for the exchange of ideas.

“[It] really began to develop some intellectual kinds of offerings that our students were engaging in through their research experiences,” says Riley-Casey.

This year’s theme is “This is Equity: Belonging, Unpacking and Claiming.” According to the website, the theme is meant to explore ways that students can engage in self advocacy, in order to understand and challenge the dominant systems of oppression. Consequently, all workshops and presentations are built around the overall theme, in order to explore “intersectionality and identity development.” While it is a student conference, Riley-Casey says that staff and faculty are also welcome to present and this year there are a total of 10 different workshops and presentations. In past years, attendance has included approximately 150-200 students from across the LVAIC consortium, so Muhlenberg can likely expect to see this amount in attendance this month.

Muhlenberg also has three students presenting at the conference, including Steven Smith ’19 & Nelly Montina ’19, advised by Professor John Lassiter, who conducted research on Predominantly White Institution (PWI) as an extension of the criminal justice system: Policing Black men’s bodies through invisibility and hypervisibility. According to Riley-Casey, Smith and Montina also presented this research at a conference in Boston. The third Muhlenberg student presenting research is Bridget Cantor ’20, advised by Professor Amelia Moreno, who studied abroad in Panama and is presenting her research, entitled “From Heritage Speaker to Heritage Language Learner.”

The keynote presenter is Tyrone Russell, who was the previous multicultural director at Lehigh and now owns and operates his own consulting firm, Faces International. Faces specializes in networking & professional development around equity.

“[They are] very talented young men,” says Riley-Casey of Russell and his team, “who seek to uplift young people to understand their value unto the world.”

The conference provides the opportunity for students and faculty to be in dialogue about topics of race and marginalization.

Confronting the past and striving for a more equitable future