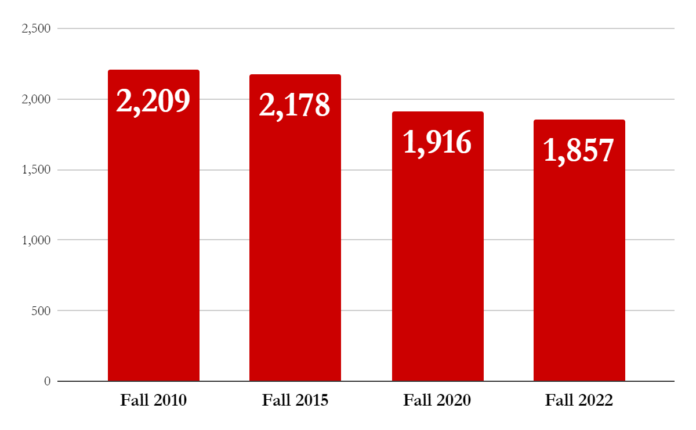 Muhlenberg has consistently prided itself on being a small school where students can engage one-on-one with professors and gain a rich liberal arts education. Now, these traits which once served as attractive factors for high school students choosing where to spend their next four years may be the reason why fewer high schoolers are deciding to become Mules.

Melissa Falk ‘92, dean of admissions and financial aid, noted that at their point of entry the class of 2023 was at 538 students. In 2022, the incoming class measures 420 students. Looking at the statistics from a broader level, according to the Registrar, the total enrollment of full-time residential undergraduate students in the fall of 2015 was 2,178. Conversely, this semester saw 1,857 of these students entering the College–a decline of 15 percent.

The Weekly spoke with several administrators at the College in an attempt to determine the cause(s) of this drop, and the policies being put in place to counteract it.

One of the primary factors presented was a dip in the number of births at the time the first-year class was born. Vice President for Enrollment Management Meg Ryan explained this noting, “the enrollment challenge is not unique to Muhlenberg College, it’s part of a larger national trend that we have been preparing for for years—the speed of which was accelerated during the pandemic. Nationally, the number of high school graduates has been on a decline with a projected drop off in 2026.”

“The enrollment challenge is not unique to Muhlenberg College, it’s part of a larger national trend that we have been preparing for for years—the speed of which was accelerated during the pandemic.”

Provost Laura Furge echoed this sentiment and added to it saying, “Birth rates are declining. That’s one thing, but we typically have more immigration, which also leads to higher high school graduate rates. But that also has declined in terms of the number of people who are not necessarily born in the U.S., but come here and complete high school and go to college.”

The U.S. Census has noted a significant decline in birth rates due in part to the 2008 recession, which reduced births by nearly 2.3 million in the U.S. between 2008 and 2013. However, the majority of the first-year class was born between 2003 and 2004, before this drop-off. Looking at national statistics, there is only a drop of 0.7 births per 1,000 people between 2000 (the earliest most of the senior class was born) and 2003, not enough to constitute such a large dip in enrollment. Looking more specifically at New Jersey, the state where the majority of Muhlenberg students reside, there was only a 0.1 decrease per 1,000 people between 2000 and 2003.

In regards to immigration lessening, the Migration Policy Institute noted that, “The number of people granted legal permanent residence in the United States in FY [fiscal year] 2003 dropped 34 percent. The total fell from 1.06 million the previous year to just under 706,000.” Even though the number of individuals granted permanent residence in the U.S. dropped significantly in this year, one wonders if these numbers account for the considerable drop in Muhlenberg’s student body.

Director of Women’s and Gender Studies and Professor of English and Film Studies Francesca Coppa, Ph.D., outlined that Muhlenberg’s classification as a college and not a university could be affecting the College’s enrollment. She explained, “it’s slightly unevenly distributed in that… we’re [a] college, we’re not a university—Muhlenberg College, not Muhlenberg University. A university is usually a collection of colleges that has a graduate school, and might also have [a] school that does something really pre-professional, like… nursing, hotel management [or] engineering. We don’t do nursing, that’s not our brand. And it’s not the traditional brand of the liberal arts college.”

Falk noted that many students and parents don’t view liberal arts colleges as places where opportunities are plentiful. A new focus on branding to attract this competitive pool of high school students and emphasize the College’s strengths was highlighted by Falk. She stated, “I think we’ve got to put a finer point on what our outcomes and our results are. And I think we’ve got to be willing to communicate that broadly and boldly. One of the things that I love about Muhlenberg as a community, is that there’s this humble culture about things. But I think it’s okay to be like, we’re that good.”

Branding may not be the only factor straying away potential students. Prior to room and board, tuition costs come out to $58,005. This high price tag might serve as an aversion to some potential applicants, especially those that are unaware that Muhlenberg offers 99 percent of first-year students some form of financial aid. When Falk was asked about potentially lowering this sticker price she commented that “I will say, I understand the cost of educating our students is expensive, and there’s a reason for that.” When The Weekly asked Falk if lowering the sticker price in lieu of giving out less financial aid was a possibility Falk stated that “I don’t know that I can say, personally, a recommendation there. It’s not my place to do that.”

The Institutional Academic Renewal Task Force includes Coppa as well as several other professors from a variety of different departments. In a joint statement to The Weekly, the task force outlined their purpose saying that they were “formed in May 2022 to make recommendations to President Harring about how to adjust the size of the faculty to reflect the projected smaller student population of Muhlenberg over the next few years.” Harring confirmed that changes will be coming in response to the decline in students saying, “The College is beginning a process of assessing our curriculum to ensure that the classes and experiences we provide align with today’s students’ needs and interests… We anticipate that there will be changes in curriculum and staffing over the next two years. Students will continue to work closely with their advisors to plan a course of study that meets their goals.”

Coppa informed The Weekly that the task force’s assessment concluded that “the key bit of the task force is essentially we’re recommending that we slim down the number of faculty by… not immediately replacing everybody who retires…Which might mean that there’s a little bit of intermediate awkwardness.”

Coppa emphasized the importance of interdepartmental collaboration and overlay. This was also stressed by Professor of English Jim Bloom, Ph.D., who noted that, “This year’s enrollment plummet has become, as it should have, an in-your-face, ‘WTF!’ moment for faculty who kept clinging to departmentalism. Department boundaries were never set in stone, though generations of professors have come to see them that way.” Bloom added, “This mindset led chairs and [department] members to always insist on replacing retirees and often expecting that their successors would teach exactly the same courses the retirees had offered, rather than seeing departures as opportunities to rethink their programs and perhaps even collaborate with other departments and programs and perhaps even lower overall compensation costs.”

Some may wonder what the implications of a smaller faculty holds for the future of Muhlenberg. Will class sizes increase with less faculty? Will courses covering entire topics no longer be taught? These questions remain unanswered.

While The Weekly (and even possibly the administration) do not know what the exact cause, or causes, for this decline in enrollment are, ideas regarding changes that the College can implement to aid this dilemma are always circulating. The Weekly reached out to several tour guides, students who work with potential first-years most directly, to share what prospective students and parents are looking for in a college, and whether they see Muhlenberg as a good fit.

Tori Brady ‘25 noted that “From personal experience, I make sure to emphasize the importance of the liberal arts here at Muhlenberg and how important theater and the arts are especially because we have the GAR [general academic requirement] for students to take an art class and experience something possibly outside their comfort zones. I have not experienced too much confusion with ‘liberal arts school’ or the confusion is just not emphasized or asked about.”

Anam Ali ‘25 had a different perspective saying, “I find that a lot of students and parents visiting have the impression that liberal arts schools don’t have strong science programs and that they only focus on the humanities. As a science student on the pre-health track myself, I would say that some of our strongest programs are our natural sciences.”