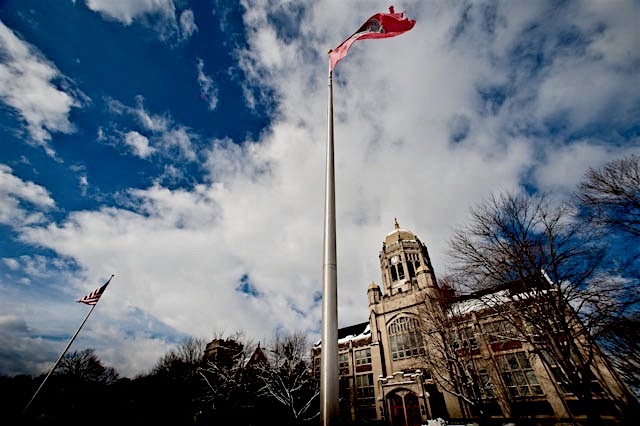 In conjunction with the ongoing fight to quell injustice on campus, a large number of students have been vocal in the past few weeks to remotely stand in protest against any and all manner of speech and expression which implies the oppression, silencing and hatred of marginalized communities. The administration, faculty and student body have been involved in an ongoing conversation about proper interpersonal and supervisory conduct to support, protect and engage with numerous outspoken students and groups concerned about their safety and comfort on- and off-campus.

Recently, the College received a message from the Student Government Association, signed by hundreds of Muhlenberg students, expressing concerns about the ‘Berg Bookshop’s sale of American flag masks with a single blue stripe. Shortly after, President Harring stated in an email that, “We believe profiting from any cause would be against our basic values to respect differing viewpoints and constructive discussion. That is why the bookstore was instructed to remove ‘Thin Blue Line’ face masks once we learned they were being sold. And it’s important to note other cause-related face masks, such as those for Black Lives Matter, have not been sold in the bookstore.”

However, in reaction to the address, some students responded by speaking in stark opposition to the statements made by President Harring. Before long, the decision began making headlines in right-leaning mainstream news outlets, such as Fox News, which released Muhlenberg’s decision to the public on September 3. In addition, much stronger attacks and arguments were made against Harring’s statements by Campus Reform, a smaller conservative outlet aimed towards college campuses.

The Campus Reform article honed in on Ariel Abergel ‘21. According to Abergel, “[President Harring’s] claims that it [the thin blue line symbol] is directly linked to white nationalism are made-up and a scathing insult to law enforcement and the majority of us who merely support them.”

The portion of the address from Harring being referenced here reads: “Traditionally, the Thin Blue Line symbol stood for respect and support of our nation’s police officers. In recent years, however, it has been adopted by white nationalist groups, along with Confederate and Nazi imagery.”

Abergel described to The Weekly the ways in which he personally took offense to this segment of the letter saying, “Her use of the term “Nazi imagery” to describe it [the thin blue line symbol] is borderline Anti-Semitic.” Abergel added to Campus Reform that the statements made are “rooted in falsehoods,” and calling the address “a demeaning slap in the face to the many law enforcement families who send their kids to Muhlenberg and pay Dean Gulati’s salary.”

In the Campus Reform article, Abergel mentioned Muhlenberg College Republicans President Robert Arena ‘23. Arena wrote to President Harring on September 8, in an email distributed to the College Republicans community, saying, “It is my moral obligation to speak to several members of the campus community whose voices are often dismissed. The consensus after discussing this administration’s statements with alumni, members of the Board of Trustees, and my fellow students was sheer disbelief, outrage, and embarrassment.” He expressed similar concerns to Abergel’s, writing in hopes of receiving an apology, with promise of further action if not.

“I hope, as President of our college, you will lead by example to retract these statements and apologize to the campus community and law enforcement community that is offended and appalled by your administration’s manipulation of a symbol of respect to our law enforcement,” said Arena. “Our campus police and the Allentown Police Department do nothing but good for our school and disrespecting them is completely out of line. I hope to receive a response from you within a week so I do not have to take my concerns elsewhere.”

At the time of publishing, a week had passed with no public response.