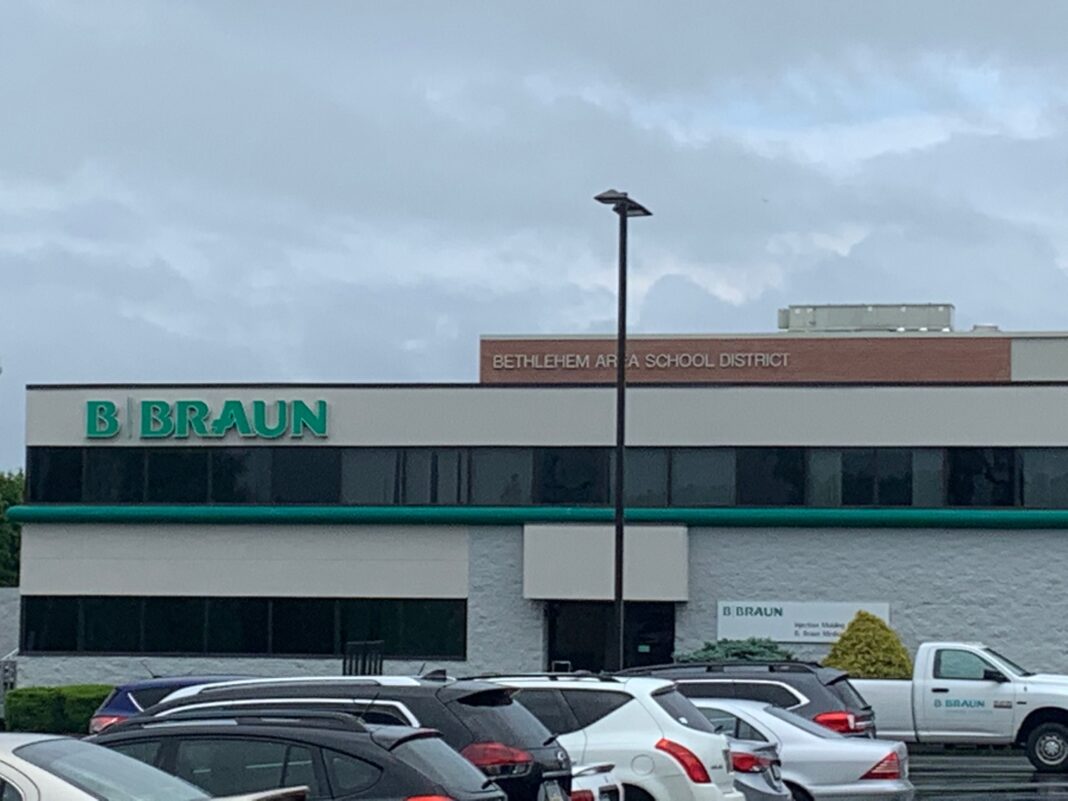 Nestled on the intersection between Marcon Boulevard and North Irving Street in Hanover Township, local community members would never believe that medical device company B. Braun would become the center of a divisive debate about air quality in Lehigh County. Nor would they believe that the white, tufted clouds of smoke billowing from the smokestacks day in and day out contain concentrations of known carcinogen, ethylene oxide, so high that it placed B. Braun as one of the top 20 polluters of the chemical in the country, according to 2018 EPA risk-assessment data. In fact, community members in a small suburb of Chicago, Illinois just over 700 miles west of Hanover Township never assumed the same of their local medical device facility, Sterigenics.

It all started with a breaking story by the Chicago Tribune in August of 2018 warning residents that emissions from the Willowbrook company could be harmful according to a federal report says. It seemed that the ethylene oxide sterilizing the medical equipment and food products of the facility and spuming from smokestacks into the residential air proved to be a more formidable carcinogen than scientists had originally anticipated. According to the Environmental Protection Agency, ethylene oxide is a flammable, colorless gas that is used to make products like antifreeze, textiles, plastics, detergents and adhesives. It is also used to sterilize medical and industrial plastic equipment. While it was once thought to be safe in low concentrated amounts, its danger was reconsidered in December of 2016 when a review of previous literature prompted the EPA to update their risk calculation. A new National Air Toxics Assessment (NATA) was conducted across the country, and sterilization facilities throughout the United States whose ethylene oxide emissions previously had not raised concerns burned red on the maps, including Sterigenics.

Susan Buchanan, MD, associate director of the Occupational and Environmental Medicine program at the University of Illinois at Chicago, led a project to test community members exposed to emissions at the Sterigenics Illinois industrial sterilization plant. “The area in Chicago west of Sterigenics lit up for cancer risk,” says Buchanan. “There’s just a lot that’s not known about this chemical so what we did is really just a rough first impression.” Buchanan and her team collected 93 samples from residents living near the Sterigenics facility and found that the average level in the neighborhood closest to the plant was higher than the average for those living farther from the plant. The results sent ripples of concern through the community.

“My son took his first breath in a place I never imagined would be potentially harmful for his health: Hinsdale, Illinois,” writes Chantal Panozzo in her opinion piece published by The Guardian a year after the ethylene oxide emissions at Sterigenics began gaining traction. Enchanted by Hinsdale’s prestigious multimillion-dollar mansions and upscale shopping, Panozzo raised her family and cultivated her career just a couple miles north of the Sterigenics facility. She emphasized that while she comes from a wealthier suburb of Chicago, this did not immunize her or her family from the detrimental effects of ethylene oxide that had been pumped from the Sterigenics smokestacks for over 35 years. Patty Bennett from Lake County, Illinois, 50 miles north of the Willowbrook plant, said to The Chicago Tribune in August of 2019, “It just angers me to know that the one thing I can’t control is right here. It’s in my house. It’s in my private space that I come home to every day. I feel like I don’t want to be here. I hate coming home. It’s like a psychological thing as I’m driving here because I’m breathing it in and it’s not stopping.” Similar sentiments ran through the Chicago community, as local residents berated lawmakers and sterilization industry corporate heads for answers. “Stop Sterigenics”, a Facebook community group, was formed in August of 2018 in response to mounting concern over the chemical emissions from the plant, which soon became a grassroots community movement with almost 8,000 members, giving a voice to residents who sought legislative action against the facility.

In September of 2019, Sterigenics announced that it would not reopen amidst “the unstable legislative and regulatory landscape in Illinois,” effectively abandoning the Willowbrook operations in response to the growing backlash. But it wasn’t a complete victory for Chicago community members, as fellow medical sterilization facilities Medline Industries and Vantage Specialty Chemicals remained rooted in their assertion that ethylene oxide was a viable method of pharmaceutical and general equipment sterilization. Lawsuits started popping up in Lake County, all on the heels of the dozens of lawsuits being filed in Willowbrook’s neighboring county of DuPage, each holding the facilities responsible for rising reports of cancer and other ailments among community members. And so, the fight in Chicago for more pressing regulation on ethylene oxide emission standards in the United States continues, but what does this have to do with our community in Pennsylvania over 700 miles away?

Well, the same NATA mapping that condemned Sterigenics to its fate raised similar concerns for the Agency for Toxic Substances and Disease Registry (ATSDR) region overlooking Pennsylvania. That is, the estimated risk for DuPage County (encompassing the Sterigenics facility) in 2014-2018 registered a 300 in a million cancer risk, while Lehigh County (where B. Braun is located) recorded twice that: a 600 in a million risk. This means that out of a million residents exposed to concentrations of ethylene oxide, an estimated 600 could develop cancer as a result, effectively placing Lehigh County in a risk group almost nine times above the national average. I reached out to the Region 3 ATSDR office for more information regarding B. Braun’s emissions and was told that they are reviewing emissions and cancer registry data in coordination with the Pennsylvania Department of Health to evaluate exposures and cancer risks. But they also said that actual ethylene oxide air concentrations for the community are not currently available, most likely because they would require more sophisticated means of monitoring data that hasn’t been provided for through funding.

Can B. Braun be held responsible for the bulk of these emissions? According to EPA regulations, B. Braun is operating within their restrictive limits on ethylene oxide emissions, but even so, at the beginning of 2020 B. Braun committed to lowering their emissions in response to resident concerns. I reached out to B. Braun for comment on their efforts to lower emissions, but did not receive a response. And the case can be made that if ethylene oxide is a problem we would need to look beyond device sterilization facilities. In fact, before closing, the Sterigenics facility issued a press release in May of 2019 pointing to vehicular emissions and increasing construction in the Chicago area as primary contributors to ethylene oxide concentrations in the local atmosphere. “Environmental agencies did enough monitoring around Sterigenics to show that it was definitely coming from the plant,” counter Buchanan. “So it was clear that the levels were elevated downwind of the plant.” While the case for these accompanying emissions remains the lack of actual data clarifying prominent points of risk to the public has only widened concerns especially as the threat of the unknown becomes increasingly pervasive among Lehigh County community members. In response to this threat, the same patterns that started the pushback in Willowbrook and beyond have taken root among local residents, with a community Facebook group gaining traction and increasing lawsuits being filed against B. Braun for mounting cancer risks as a result of ethylene oxide concentrations in Lehigh County air.

The conversation over the dangers of ethylene oxide emissions was put on hold during the COVID-19 pandemic, as increased sterilization efforts of various medical devices turned paramount in defeating the spread of the virus. In March of 2020 the EPA claimed that while they are still committed to tackling ethylene oxide emissions, “increasing production at these facilities will help protect healthcare workers and patients, who have a critical need for access to sterile medical devices and equipment.” In light of recent events ethylene oxide has become the secret protagonist, as in April it was reported that Hanover Township’s own B. Braun facility had aided in providing necessary equipment on the medical ships headed to California and New York City to help those on the front lines.

In navigating the plurality of uncertainties in this debate, the question remains: at what cost? Does the sharp increase in production with ethylene oxide threaten to save the life of a COVID-19 patient at the expense of polluting a local resident’s lungs? Is ethylene oxide truly the universal method of medical device sterilization? “These facilities are using that case to bolster up their reason for being.” says Buchanan. “There are alternatives to sterilization, ethylene oxide is not the only thing that can be used.” For now, communities are left in the dark about the safety of the air they breathe.

The Sad Fate of “Recyclable” Plastic

How Stress About the Climate May Dictate the Next Election