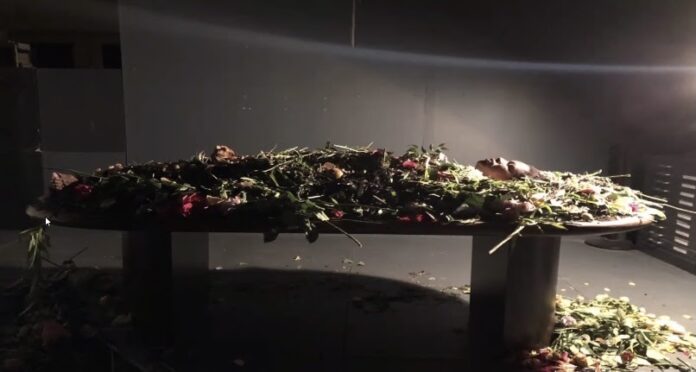 As Mayfield Brooks, a Brooklyn-based agricultural and dance improvisation artist, introduced themself to the Zoom of nearly one hundred viewers, they did so by reminding us that “We all come from the earth; it’s a part of us.” This thesis proved central to their dance exhibition “Viewing Hours,” which they toured pre-COVID. Viewing the choreography as “less composition of movement and more de-composition,” Brooks buried themself in over forty pounds of dirt to symbolize both the decomposition of Blackness in the face of anti-Black violence and the renewal that occurs when repairing this violence. While Mahalia Jackson’s “I Come to the Garden Alone” played, audience members traveled in groups to view Brooks, wherein they askedthe audience to be a witness to their art. “I am not asking you to see me,” Brooks monologues, “because the world has not prepared you to see me.”

This sentiment of invisibility remains resonant in the lives of Black women on campus, especially those involved in creative spaces. Theatre student AJ Henley ‘24 remarks that, “While white students get multiple main stage shows that cater to them every year, it feels like Black students get the token play to try out for… Students of color are also often relegated to the ‘smaller’ shows, such as the play festivals or the Sedehi Diversity Project.”

Film student Amira Jackson ‘24 adds, “Being a Black woman and an artist at a PWI (Predominantly White Institution) can be extremely desensitizing. In a majority of my artistic classes I am either the only Black person or I am one of two Black people… It’s also hard not seeing any teachers of color.  Due to the lack of diversity, it can feel like I’m being tokenized as a Black woman sometimes. It can be hard to just exist in the artistic atmosphere without feeling objectified.”

Frustration with performative activism served as the topic of a video exhibit by Autumn Knight, another presenter at Black Feminist Art & Action. Using “Black disappointment” as a theme throughout her work, Knight sought to create a performance installation that would challenge “what parts of the Black artist are valuable” against a backdrop of performative activism and the decentralization of Black women from creative spaces.

At the event’s beginning, Kucik remarked on the timing of Black Feminist Art & Action. She statedthat “When we were thinking of the timeline of this event, we wanted to do it now because during Black History Month, we mostly hear about Black men and during Women’s History Month, we mostly hear about white women. By hosting this event now, we can use this time to center and honor the legacies of Black women in the arts.”

Indeed, a 2019 study by the National Center of Biotechnology Information reported that in eighteen major US museums, Black artists constitute the lowest percentage of works exhibited, around 1.2 percent, while 85.4 percent belong to white artists and 87.4 percent belong to male artists. As Jackson puts it, “Honoring and supporting Black women goes beyond having an occasional round table. There aren’t any spaces on campus that have been created specifically for Black women. Round tables and virtual discussions aren’t enough anymore.”

In the midst of art entrenched in Black disappointment and frustration, Lukaza Branfman-Verissimo’s Bright As Yellow manifesto seemingly differed from this sentiment. An ever-growing collection of mantras, art curator and creator Branfman-Verissimo had their virtual audience unmute and echo the mantras from Bright as Yellow, which began with simple moments of appreciation, such as “Bright for love and feeling loved, bright for the sun, bright for support and safety and care.” In this moment, Branfman-Verissimo’s audience could rejoice alongside them in appreciating the small wonders life offers. That is, until the sentiments grew more complex and transparent in their reason for existing. “Bright for my response to racism is anger,  bright for getting out of the classroom and into the streets, bright for abolishing police, jails, ICE, detention centers,” and so on, an unending chain of mantras created from a deep disappointment, fear, and anger, but mostly a deep desire to create future change — and brightness — from a present swathed in darkness.

It is from Branfman-Verissimo’s perspective of necessary brightness that, when asked what positive dialogue she has seen on campus regarding the centering of Black women, Jackson said, “I can appreciate the effort that the school has taken… but eventually action must be initiated.I would like everyone to know that every Black woman is different… That needs to be reflected in the artistic roles and opportunities we’re given. I would like to see a variety of Black female characters on stage. A variety of Black female faculty and staff honored for their work. That would lend the best representation of our perspective, because we don’t have just one perspective. We have many, and it’s incredibly important that each one be seen.”
Jackson said,  “I think rather than asking how Black women can play a role in the space of a PWI, you should be asking how Muhlenberg can create an artistic space for Black women. It’s not about centralizing my perspective, it’s about having a space where I can share my perspective and do so comfortably.”