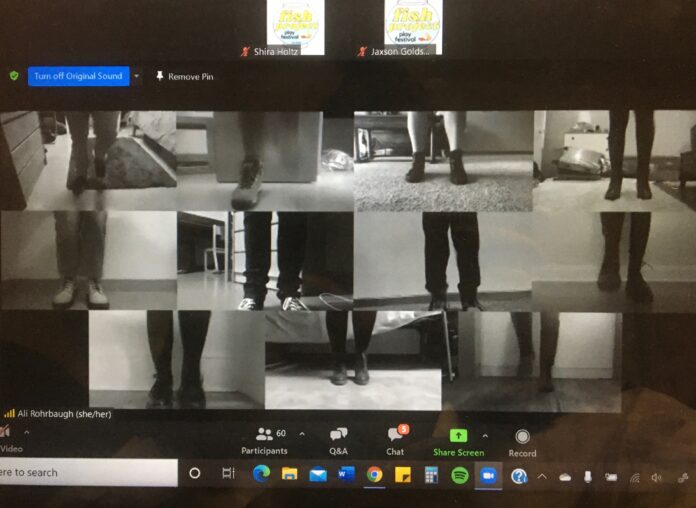 The Muhlenberg Theatre Association’s Fish Project Play Festival returned for a second weekend, from October 23-25, to stage a few of the previous week’s successes, as well as premiere a few new entries. Below is a selection of student-written reviews from two of the productions whose virtual premiere was part of the second week of performances.

The White Plague; A review by Danny Milkis

The White Plague, by Czech playwright Karel Capek, had its premiere as part of the second week of the Fish Project Play Festival. Featuring an all-too-familiar fatal pandemic, the play deals with themes reminiscent of the current COVID-19 public health crisis.

Directed by Bekka Broyles and stage managed by Carlie Nieman ‘23, the satirical drama takes viewers to a civilization in the midst of economic turmoil, political corruption and complete national disparity. The world-building aspect of the piece was nothing short of extraordinary, and the actors and designers were very thorough in the intricate creation of the world being portrayed onstage. The story follows Dr. Galen, a medical practitioner native to the slums, who claims to have found the cure to the leprous disease, with an emphatic and emotional performance by Chris Rubingh ‘24. Galen’s encounters with three adversarial figures throughout the performance were episodic in nature, featuring the skewed medical ethics of Dr. Sigelius (Madeline Burk ‘23), as well as the authoritarian politics of Baron Krug (Connor Ryan ‘24) and the Marshal (Connor Baker ‘22).

In post-production, the team was able to transform the edited footage by adding even more dimensions. There was a clear divide between Galen and the other characters due to the usage of black-and-white filtering. Other characters were given this important visual touch to seemingly portray the polarity of those who submit to the ways of authoritarianism, which processed in a breathtaking way from the perspective of the viewer.

Additionally, even though the cast were limited in the supplies that a virtual platform could offer an ensemble piece, they used it to their advantage, with a number of the more militaristic scenes represented by almost mechanical marching from rows of unidentifiable pairs of legs. It almost seemed like each soldier blended in with the soldier in the next frame, and provided a very artistically sound representation of an environment on the brink of war and destruction.

All in all, this adaptation of the renowned expressionist play was not only enlightening, but timely. The science fiction behind many of the core political and economic themes of the piece was, unfortunately, not very much of a fantasy at all, and I commend the entire cast and production team for their dedication and understanding in performing this show.

Heart of Hearing; A review by Johnny Veglia

Heart of Hearing by Joseph Zeccola is a charming piece which touches on a multitude of themes and ideas, such as identity, relationships, and love. The piece was directed by Amira Jackson ‘24 with Becca Millevoi ’24 as Angie and Nicholas Carty ‘23 as Josh, the two main characters for the ten minute play. Jackson does a wonderful job of utilizing the Zoom space in an honest and interesting dynamic throughout the performance. For instance, the audience watches Angie prepare herself for the meeting through her mirror’s reflection. The characters also move around so the piece does not feel stagnant or stuck. Jackson makes sure these moments of movement feel earned and uses them well in highlighting specific moments of the text. In addition, the characters are also in very casual clothing and settings. Sidney Kaeb ‘24, the editor and scenic designer, did a great job of making this call feel as if it was a real Zoom conversation.The two characters in Heart of Hearing, Angie and Josh, had a very interesting and complex chemistry between each other as they talked through the piece. Angie and Josh clearly had a history together and they reflect the highs and lows of their relationship in an interesting way.

The characters were extremely charismatic and Zeccola’s work never framed one as the good or the bad guy in breaking up the relationship, but rather chose to portray them as flawed human beings. The text also revealed that Josh and Angie had different career goals in their lives with Josh currently at school and Angie pursuing writing. The chemistry was really wonderful as the two of them describe their past love for one another and how they would behave. Josh mentioned how he made pasta with his Grandma’s sauce for their date together and he even tried to have Angie watch Star Trek with him, but it never happened. Josh being a fan of Star Trek is a really interesting and important part of the piece as it not only showcases some of Josh’s personality, but the story about William Shatner adds a complex dynamic to his fandom and their relationship. The characters definitely feel like real people thanks to the portrayals of Angie by Millevoi and Josh by Carty, respectively.

Overall, Heart of Hearing by Joseph Zeccola is a piece with interesting and relatable characters as they communicate with one another to reflect on their past and what a relationship could be.