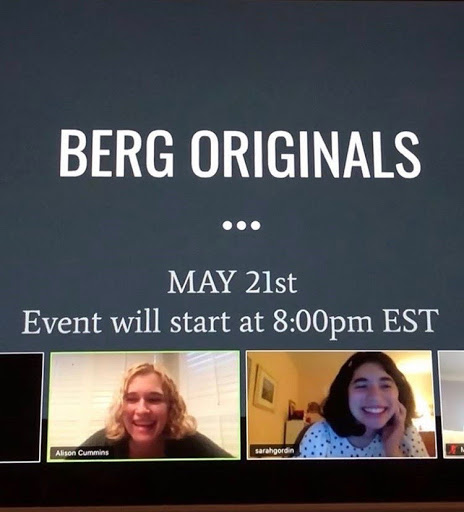 Muhlenberg College Theatre Majors Sarah Gordin ‘21 and Allison Cummins ‘21 have created what is now an internationally recognized organization known as Berg Originals, “a space to bring together artists to have their work workshopped & listened to!” Thursday, July 16, the club collaborated with Muhlenberg Muses Literary & Arts Magazine (led by Muses Editor-in-Chief Hannah Betz ‘21) to hold their very first “Poetry Night.” The poems showcased were written by Muhlenberg students, alumni and the broader arts community, which included some professionals and hobbyists. Some poems were read by their writers, and others were read by actors. All 16 works, ultimately, were equally heartwarming and beautiful.

Here are some highlights: Garrison’s piece surrounded the story of the first woman in space and spoke on the female voice with powerful lines, such as the “collection of forced mouth silences.” Blak’s piece was an ironic poem that spoke on how tough it is to be positive in such negative times with a fantastic poem titled “This is a Positive Poem.” Some of my favorite lines from Blak’s poem included, “Why don’t we get some new rights before we get a new iPhone,” and “I was taught there was always light at the end of the tunnel.”

Weber read her poem that was based on a virtual concert she had watched during the pandemic. Some lines that stood out to me were, “people stare at pixel woman,” “friends are pixel people now,” “not bone and blood”, and “somewhere sits breath, dangerous breath.” Baker wrote a piece on his pandemic experience with one-liners such as “tik tok tik tok,” “coming to us with little dings” and “what we can do to make sure we don’t sink.” Baitel shared a love story within her poem with lyrics such as, “I continue to dance from my shower curtain” and “They don’t play that kind of music in sequin nightclubs.”

When asking questions of Cummins and Gordin to learn their take on Poetry Night’s execution and overall outcome, they responded eagerly. “We wanted to reach out into different types of writing and artistic creation,” stated Cummins and Gordin. “Poetry is something that many people engage in, whether it’s listening, reading, or writing poetry. We wanted to have an event that was open to many topics within a specific genre, and poetry seemed like a great way to do that. We also wanted to collaborate more with groups on Muhlenberg’s campus, and so we reached out to Muses to work on this event with us.” When asked why they founded Berg Originals they answered, “We were both sent home from study abroad early, so we had a lot of time on our hands even before the summer. We were feeling artistically drained, craving the Muhlenberg community, which for us has always been a source of inspiration and feedback. We wanted to facilitate the creative spaces we found at Muhlenberg at home, and we both got really excited thinking about coming together as a community focusing on art again.”

Additionally, I questioned Cummins and Gordon about the steps they took to turn their idea for an organization into a reality. They answered, “We decided to have our first event centered around plays and the workshopping of those plays. Both of us are very involved in the theatre community at Muhlenberg, and we had both written plays as a part of another event taking place online. We were both sitting on plays that we wanted workshopped, and we figured others might have had quarantine creations as well. Our first event amassed six plays and fifty participants, so we were right! Since then we’ve had multiple play events, a screenplay event, a film screening, a pride event and our most recent poetry night. We’ve been working on expanding our events in not only an artistic sense, but in a community sense as well. We’ve recently opened up our events to people outside of the Muhlenberg community, and we’re even participating in an international theatre festival on August 1st and 2nd.”

Further, the Muses’ side of planning led to a conversation with Betz. When Betz was asked what inspired her to collaborate with Berg Originals, she responded, “Berg Originals actually reached out to MUSES a few weeks ago to find out if we were interested in collaborating for their Poetry Night. Of course we were! While the Berg community is unable to meet physically, I’ve really appreciated that Berg Originals has been working to maintain a sense of community digitally. I was really grateful that they wanted to welcome MUSES into that community.” Betz also received the question regarding the ways in which Muses will function once school starts, taking COVID restrictions into consideration. “My greatest concern is safety for our staff and our community,” she stated. “We won’t hold in-person staff meetings and will probably have to get creative for our fall coffeehouse nights. Maybe we’ll hold those digitally, like Poetry Night, or maybe we’ll seek out a larger space so we can still congregate while observing social distancing. Restrictions won’t stop our creativity or our community-building; they’ll just change how those things look.”

So, if you are interested in participating in one of Berg Originals’ upcoming events, feel free to follow them on Instagram @bergoriginals for consistent updates, such as their recent “Dramebaazi” event! Moreover, make sure to follow @muhlenbergmuses for updates on their newest works and events as well.

The process behind the production of “Spring Awakening”

From the Page to the Stage