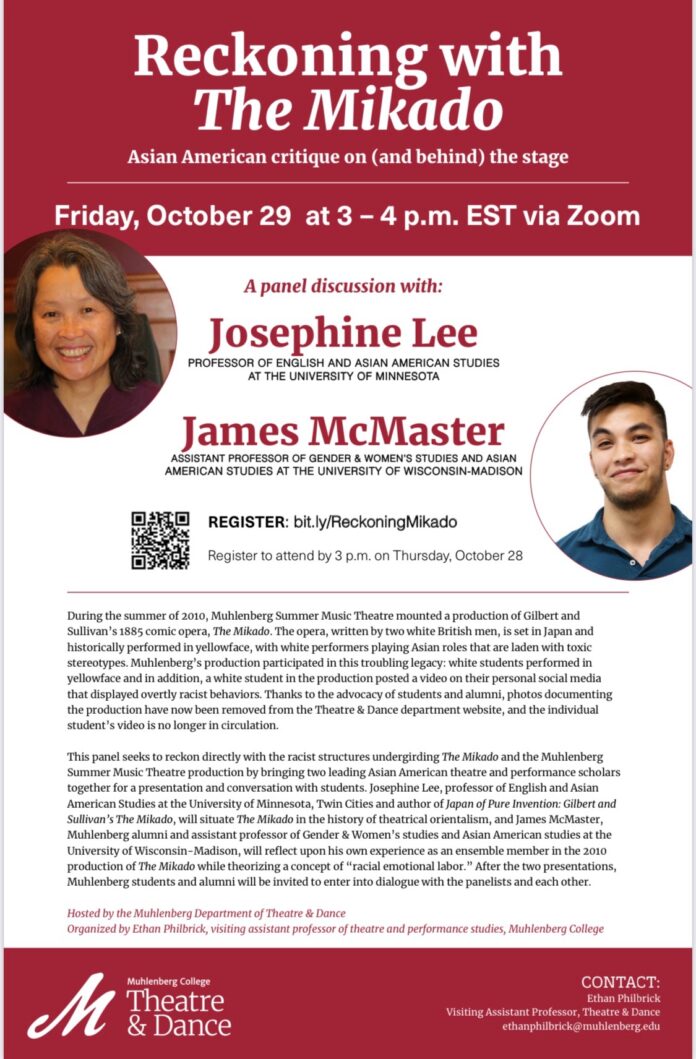 The work of theater is powerful and influential for people across the globe, but sometimes this power can have negative consequences when used to portray harmful stereotypes and racism. Muhlenberg College is no different with the various productions done by the theatre and dance department, including the Muhlenberg Summer Music Theatre.

During the summer of 2010, Muhlenberg College hosted a production of “The Mikado,” an opera by Arthur Sullivan and William Gilbert from 1885. Alumni of the College, working with current students from the Asian Student Association (ASA), brought to the College’s attention the racism of the show and offensive actions from behind the scenes, bringing the production to light once again in 2021. The Muhlenberg Weekly posted an article following President Harring’s comments regarding the piece and the theatre department’s removal of the pictures and other elements related to the production from the website. This past Friday, Oct. 29, Ethan Philbrick, visiting assistant professor of theater, hosted a panel discussion with two  scholars of Asian American studies who are connected to the world of performance.

Josephine Lee, Ph.D., a University of Minnesota professor of English and Asian American studies, is a scholar of this piece and the harm it has done across the globe, stating her findings in a book titled, “The Japan of Pure Invention: Gilbert and Sullivan’s ‘The Mikado.’” Lee is also the chief editor of the “Oxford Encyclopedia of Asian American Literature and Culture.” The other panelist was James McMaster ‘12, Ph.D., an assistant-professor of gender and women’s studies and Asian American studies at the University of Wisconsin-Madison. McMaster is also an influential writer with published works in development for American Quarterly, Howlround, the Journal of Asian American Studies and more respected publications and journals relating to his areas of study.

“I want to extend my gratitude to and my solidarity to the Asian Student Association and everyone else who has made it their responsibility to demand institutional accountability around anti-Asian racism at Muhlenberg and I want to acknowledge how amazing what Professor Josephine Lee just did was.”

The event hosted faculty, staff, students and members outside of the Muhlenberg College community as well. Philbrick welcomed participants of the Zoom to the shared space and focused on the goal of this discussion to face this production head on and to approach the damage and harm done by Muhlenberg. Philbrick mentioned, “To critique something is to believe in the possibility to grow.” The event did not serve as a bashing of Muhlenberg College, but rather a focus on a hurtful moment to make sure it does not happen again. “It’s my hope this panel can be a small first step in an ongoing process for both Muhlenberg and the theatre and dance department, in particular, [holding itself] accountable for its past harms and begin imagining ways forward together,” added Philbrick.

Lee began the presentation with a PowerPoint presentation on the history of “The Mikado” and how this work has evolved and continues to evolve in the modern day. Lee is interested in “The Mikado” for a multitude of reasons and analyzed the harmful stereotypes associated with the piece. Lee first began her research and development of her novel after Phil Yu’s work and insightful contributions as a critique for Asian Americans with the title “Angry Asian Man.” Lee mentioned, “One of his comments in 2004 was about a production of ‘The Mikado’ being staged by the New York Gilbert and Sullivan players. If you know anything about that particular organization, you’ll know that they are very traditional in their staging.” Lee continued to discuss the work of this production and how it perpetuated negative stereotypes, partially through inclusion of “yellowface.” “Yellowface” is the practice of wearing makeup to imitate the appearance of an East Asian person. “Yellowface” has been a “tradition that has long been there on the American and European stage. It’s still going on,” continued Lee. The other area of focus for Lee following this production was the lack of attention by Americans and how it was able to be performed without question.

The piece has evolved over the years, however, and Lee actually assisted as a dramaturg for a local theatrical production of the opera. Lee mentioned, “After the book was written, I was actually asked to serve as a dramaturg for a production by our local Asian American theater company and Skylark Opera. When I was asked to do this by my friend Rick Shiomi, who directed, I was sort of floored because I wasn’t really ready to go back to the opera.” The piece transformed the world of the opera to England and removed any and all references to Japan. “He used it as an opportunity to cast five of the leading roles and many of the extras as Asian American singers and actors and I thought that that move was really interesting too,” continued Lee.

The work of “The Mikado” here at Muhlenberg was highlighted by McMaster who was a member of the ensemble for the College’s production in 2010. McMaster was open and honest with his experiences at Muhlenberg and how it affected him as an artist. “I want to extend my gratitude to and my solidarity to the Asian Student Association and everyone else who has made it their responsibility to demand institutional accountability around anti-Asian racism at Muhlenberg and I want to acknowledge how amazing what Professor Josephine Lee just did was.” McMaster also mentioned how the Zoom call “[felt] like a homecoming for me.”

The experience was troubling for the “working class student of color” as he utilized the paid experience to earn money for his trip to study abroad in London. He needed financial support and he did not know the full racist content of the piece.

McMaster also dived into the experiences backstage where it was even worse, as his fellow castmates were in full “yellowface” and made derogatory comments, such as “me look so pretty.”

The professor continued to dive into his personal experience and the trauma he endured on the Muhlenberg stage as the only Asian American in the cast, including at the hands of his own director. The artist relayed a direct quote from the director, “James McMaster, you are the king of the ensemble.”

“The Mikado” was not the only subject of conversation for McMaster as he also included a broader sense of the experiences for performers of color. McMaster included the depth of racial emotional labor and racial care, two elements actors of color experience daily.

Oyinkansola Adebajo ‘24, an attendant of the panel, declared, “I really related to his comments about racial emotional care and how it is for the benefit of the dominant group, as well as being the sole person of color in a show and that being the only reason you stand out and how you have no choice but to laugh.”

McMaster stated, “My experience in ‘The Mikado’ was exceptional,” and did not represent his entire experience at Muhlenberg College.

The work of these panelists helped to showcase the history and complexities of “The Mikado” and also allowed for questions and answers from audience members. One student, Joseph Marcacci ‘23, proposed a question for the two artists about how they would recommend more representation for performers of color at Muhlenberg since it is a predominantly white institution.

The event wrapped up after 4 p.m. as the conversation and insights continued to affect audience members and participants of this Zoom. A recording of the panel can be requested via the theater and dance department through Nov. 9 for people to engage with this conversation if they were unable to attend. The damage done by “The Mikado” cannot be erased, but the work of the theatre and dance department, the ASA, and other members of the Muhlenberg community continue to combat anti-Asian hate.