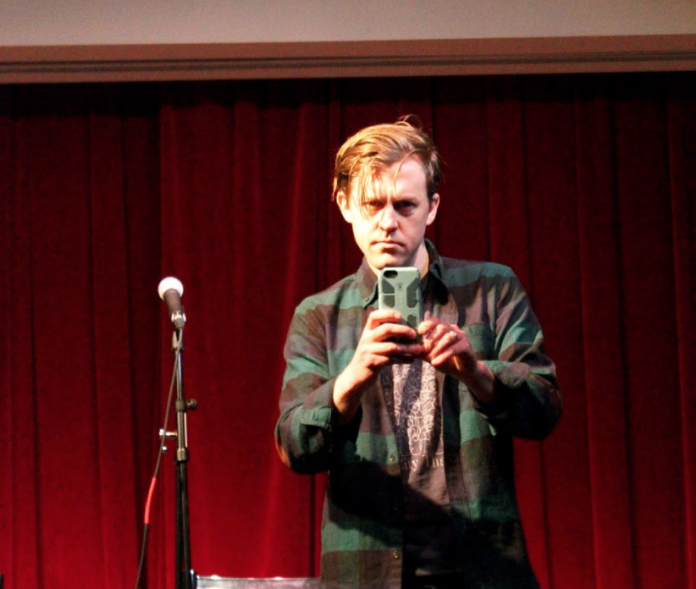 It’s no secret that one of Muhlenberg’s largest crowd attractions is the occasional appearance of a rising celebrity. Last year, Muhlenberg was graced with the presence of SNL’s Pete Davidson, one of the show’s youngest and most promising current cast members. This year, the student body was lucky enough to get another taste of the current SNL cast with a stand up performance this past Sunday night featuring Alex Moffat.

Moffat commenced his career in comedy in well-known troupes such as The Second City, ImprovOlympic, Annoyance Theatre and Zanies Comedy Club. He joined the cast of SNL in 2016 and has since portrayed Eric Trump and Guy Who Just Bought a Boat. As evident from his roles in SNL, Moffat specializes in impressions. He opened his act on campus with an extended impression of a German alter-ego he’s named Max Bremmer. Not only was he able to keep this bit up for a while, he integrated impressions within his impression like Shaquille O’Neal and an overly enthusiastic camp counselors that left the crowd roaring with laughter.

Moffat spoke to Muhlenberg students prior to the event about recent events on campus; he utilized this information with a series of jokes about things such as the school’s recent streaker. Moffat did a great job at poking fun at those comic aspects of small school life that students tend to overlook within the Muhlenbubble.

Moffat exhibited natural skills when it comes to captivating a crowd through dialogue that utilized participant interaction. However, it was clear that Moffat had not really prepared for the performance in itself, as he resulted to repeating several of the same punch lines throughout the course of the show. While the act itself was promising in that he had various routines such as purposefully bad piano playing and a section entitled “Actors who don’t know their lines,” Moffat failed to deliver an act that contained many of the more entertaining and clever aspects of his comedy as depicted on SNL.

One of the main components of the show over the past two years has been engagement with the current state of the American government and larger American society. While Moffat was able to make many comical comments about the recent drug scandals on Muhlenberg’s campus and his delivery definitely proved his competence as a comedian, his tendency to comment on the small town material available on our campus fell short of the larger comic material of which he is capable.

The event itself was organized by Muhlenberg Activities Council’s Comedy Chair, Lily Josephs ’20. Josephs has been involved with MAC since Spring 2017 and loves to see how the events MAC plans affect and make a difference in the lives of students. Josephs was responsible for the search to bring this year’s comedy headliner to campus, a process that involved going through a middle agent who has contacts with various performers. The decision to bring in Alex Moffat was made based on MAC’s budget, the list of performers available, the input of the MAC board and several other factors.

Josephs is a fan of SNL and played a big part in bringing in Davidson last year. One of her most exciting moments as a MAC member was receiving a text on Sunday that said, “Hi Lily! It’s Alex Moffat!” After spending time hanging out in GQ with Moffat and his wife, Caroline, Josephs saw that he is a sweet, candid and extremely humble guy, who “gets drunk on wine nights with his wife.” Moffat also explained how drastic the difference is between the Chicago comedy scene where he began and the world of New York City. Presumably Sunday’s crowd was full of aspiring actors from the Muhlenberg Theatre Association who might even aspire to follow in Moffat’s footsteps and become a part of something as incredible as SNL.

The Muhlenberg community was fortunate enough to experience another wonderful comedic presence on the stage, as SIT opened for Moffat. SIT, Muhlenberg’s on-campus stand-up group, performs several times throughout each semester. Last year, they were also afforded the opportunity to open for Davidson, and they never disappoint. The group’s stand-up covers topics ranging from coming out to one’s cat to oddly named baby stores in Allentown that hint at purchasing babies! The opportunities offered on campus to experience real comedy are some of the most exciting events students can experience during their years here. It seems incredible that someone who is on stage alongside Taylor Swift one night can appear here in Allentown less than a day later and lend an ear to the oddly humorous events occurring on this small campus. Whether it be the chance for random audience members to be teased by “Hollywood’s finest,” as Moffat semi-jokingly called himself, or for members of a small liberal-arts school in Pennsylvania to relate to a famous comedian about student loans, these events truly contribute to creating a campus life that supports cultural engagement.