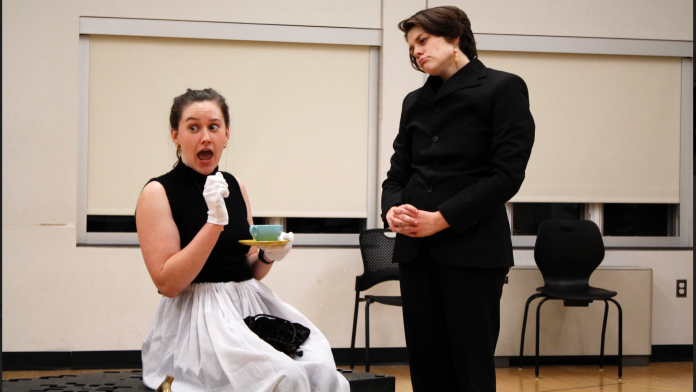 Muhlenberg Theater & Dance is set to present Oscar Wilde’s classic satire, “The Importance of Being Earnest”, Sept.  26-29. The classic 1895 comedy follows the adventures of two young bachelors leading double lives to win the hearts of those they love, leading to an amusing eruption of chaos within their Victorian world. The cast is comprised of all female-identifying individuals, which Theatre & Dance professor Jim VanValen, the play’s director, says is in part thematic, in part theatrical. The show marks VanValen’s directorial debut at Muhlenberg.

“I wanted to create opportunities — and also challenges — for some of our actors,” said VanValen. “We’re actors, and as actors we can play any part. That’s our job.”

The cast has loved working with VanValen on the play. Elizabeth Templeman ‘20 is a Theater major with an Acting concentration and a double minor in Anthropology and French. She is the understudy for Theatre & Dance professor Holly Cate, who plays Lady Bracknell.

“Jim has been amazing in making the experience comfortable for everyone and making it so much fun,” said Templeman. “He is a teacher who really enjoys letting an actor affect another actor so that they will get something in return and finding the gold in that. It’s such a hilarious and fun show, and the whole cast is just a blast to work with. It’s a comedy, so it’s fun to play and work off of each other and just be a little silly. It’s a silly show.”

Rehearsals for the play truly are entertaining. Before the rehearsal on Thursday, Sept. 12, began, cast members warmed up both physically and vocally on the floor in the Rehearsal House as members of the creative team fiddled with costumes and set up various equipment.  It was evident that the cast and creative team are very close — they conversed among one another during the warmup process, laughter filling the room as they did so.

Florry Arnold ‘20 is a History and Theater double major. She plays the Reverend Chasuble in the play.

“This is the first time I’ve been in a main stage, and it has been really fun and wonderful,” said Arnold. The rehearsal process has been super supportive; the cast is incredible and the creative team is amazing.”

The cast members put bathrobes over their outfits so that yellow, pink, purple and magenta-clad figures adorned the rehearsal floor. The production features costumes designed by Rebecca Lustig, inspired by the style of Victorian England. “The costumes are just so much fun. They’re big Victorian gowns with corsets and big puffy skirts with petticoats, among others,” said Templeman.

“The game plan for tonight is for us to just go through it,” said VanValen. “If we need to try a cue again we will. This is still a chance to discover things, see where it takes you and be open to responding to what happens. All right, we’ll have some fun and a good time.”

The performance began with a colorful spectacle. The cast danced into the center of the floor in pairs, then flowed to sit in chairs toward the front. They moved in unison with the music, feigning looking in a mirror, nodding their heads and putting on shoes. Suddenly, they took off their robes, grabbed each other’s hands and began flinging their bodies around freely. When the music stopped abruptly, they looked startled and paused, then slowly took their chairs off stage.

The rehearsal ran very smoothly, which is indicative of the hours of work the cast and creative team have put into the show. The actors spoke in lovely British accents. “We’ve been working on the accents a lot,” said Templeman. The actors were also wonderfully adept at going through the actions of the play, despite wearing minimal costumes and not having most of the props.

“Keep the volume up,” cut in VanValen during various portions of the rehearsal, reminding the actors to project their voices. VanValen also made a few blocking adjustments during the rehearsal.

Even though the cast and the creative team have read through, performed and watched the play again and again, the show is so funny, the acting so incredible, that the performance still elicits laughter from all.

At one point during the rehearsal, Posie Lewis ‘20, who plays Gwendolen Fairfax, stormed onto the stage and screamed her line, “NYEH,” with such a dramatic face and an abrupt closing of her hand in a silencing motion that the entire creative crew in attendance and some of the cast off to the sides burst into uncontrollable laughter, which lasted for several minutes. The actors in the scene at the time themselves eventually became overcome by laughter as well,  but continued through their script magnificently.

If you attend “The Importance of Being Earnest,” be prepared to laugh. And laugh. And laugh some more. “It’s playful, it’s comedy and it’s earnest,” said VanValen. “Well, it’s sort of earnest — from a certain perspective. It’s certainly a comedy — and Wilde’s wry, withering sense of humor holds up amazingly well.”

“The Importance of Being Earnest” plays Sept. 26-29. Showtimes are Thursday  through Saturday at 8 p.m, and Sunday at 2 p.m. Regular admission tickets are $15. Tickets for youth and LVAIC students and staff are $8. All ages are welcome.

Tickets can be purchased online at muhlenberg.edu/theatre or by phone at 484-664-3333. Performances are in the Baker Theatre in Trexler Pavilion for Theatre & Dance at Muhlenberg College.

Crocheting a new semester of possibilities for KnitWits

MCA’s Comedy Slam Fundraiser: a night of mystery and prosperity