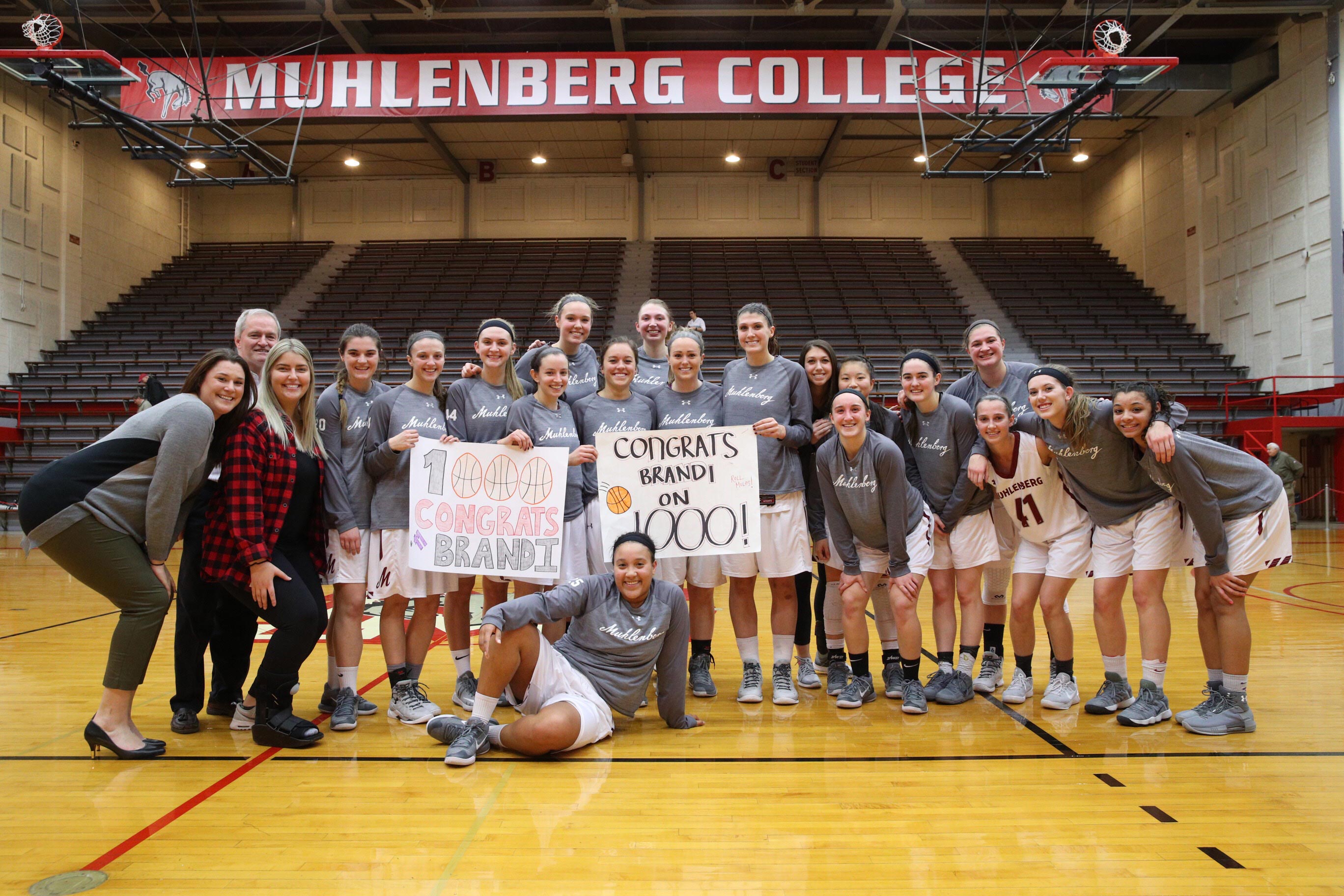 A young girl sits on the bleachers in a small-town gymnasium. The squeak of sneakers twisting on vinyl flooring and the repetitive whump-whump-whump of a basketball fills her ears. Not yet tall enough to shoot on a regulation-height basket, Brandi Vallely flips the page of her Nancy Drew book, far more interested in the teenage sleuth’s quest to catch the practical joker wreaking havoc on a college basketball team than the actual team 10 feet in front of her.

Vallely spent a majority of her childhood at her sisters’ games, especially because Danielle and Nicole Vallely played for both their school teams and Amateur Athletic Union basketball. The youngest Vallely played as well, joining the Oley Valley Youth League in kindergarten. But with both fewer games and fewer inches than her siblings, Vallely was content with a book on the wooden bleachers over a ball on the hardwood floor—at least as a child.

“Looking back, I wish I would’ve watched more,” said Vallely, “but with both of them playing in school and AAU basketball, it was a lot of games to sit through when I was little.”

“I try to emulate (my dad’s) passing when I play. Even though I never saw him play in college, obviously, watching him play later on, he has such a good court sense and I think that’s a major takeaway from him.” – Brandi Vallely

Born into a basketball family, Vallely’s life revolved around the game. Both her mother and father played basketball. Dad Art was inducted into the College of St. Joseph hall of fame and mom Judy would run the clock or take down the book at her daughters’ games. In second grade, her parents installed a backyard court for the three daughters who followed in their footsteps.

“We had lines painted and everything so it was an awesome place to practice,” said Vallely. “I remember our dad taking us out there to practice, and my sisters still give me a hard time because they weren’t allowed to block my shot until I got taller.”

That is where her basketball training really began – at home, against two opponents older, taller and more skilled than her, with a hall of famer for a coach. Her father would give the girls drills and workouts, like 25 layups on the right, then on the left, then down the middle. Day after day, year after year, Vallely would come home, often from a practice or game of her own, and play one-on-one against Danielle or Nicole, which fostered a bit of a sibling rivalry.

“I think growing up with two sisters that played made me really learn the game,” said Vallely. “Especially going against older, taller, more experienced players like them helped me once I started playing at my own age level.”

Art was both dad and coach. He was by her side, coaching her recreational, travel, AAU and summer ball teams until she started middle school. Toward the end of his time coaching her, Art led Vallely’s “fifth grade ragtag summer ball team” to victory in a game they “had no business winning” – it was his coaching that allowed them to win. According to Vallely, he was a really good basketball player. He played regularly until a few years ago and still enjoys some pickup ball now and again, and it shows in his coaching.

“I try to emulate his passing when I play,” said Vallely. “Even though I never saw him play in college, obviously, watching him play later on, he has such a good court sense and I think that’s a major takeaway from him.”

As Vallely grew older, her teams and coaches changed. In her freshman year at Oley Valley High School, she went from one-on-ones on the backyard court to capturing the district title for the Lynx in Hershey arena. Despite a missed season from tearing her anterior cruciate ligament, Vallely became a four-year letterwinner, served as captain for three years and set the school record for career points with 1,551. She was arguably the best player the town had ever seen.

By then, she may also have been the best player the Vallely family had ever seen. Danielle ended her competitive basketball career after playing one year at Cedarville University, and Nicole chose soccer and played all four years at Mt. Saint Mary’s University. After early marks of success caught the attention of head coach Ron Rohn, Brandi Vallely turned in her blue Oley Valley uniform for a red Muhlenberg jersey.

Vallely learned early on that being the best does not come without a price. After months of preparation and practice, and trying to fit in as a freshman on a majority-upperclassmen team, Vallely broke her foot about a week before games started – and a week before she would officially begin her college basketball career.

“It was really devastating for me because I came to the school for the sport and I just wanted to play,” said Vallely. “It was a really tough time for me because I had missed a season in high school and now I’d have to miss another season.”

Vallely was limited to five games by her injury and the presence of seven veterans in front of her who had led the Mules into the NCAA Tournament. Nonetheless, she made her comeback during her sophomore year – a comeback that was much bigger than anyone had imagined.

Vallely recorded a triple-double (13 points, 15 assists, 10 rebounds) against Moravian College in her first career start. She scored in the double digits in all but three games during her sophomore season. She broke a 10-year-old record for assists in a season by 99, compiling an astounding 263 helpers in 28 games.

By the end of the season, Vallely ranked first in the Centennial Conference in assists and steals, and in the top 10 in free-throw percentage, scoring, field-goal percentage and rebounds. She led Division III in assists and ranked 17th in steals. She was the NCAA statistical champion for assists per game in all divisions. Not surprisingly, Vallely was awarded the Weikert Award for Muhlenberg’s sophomore athlete of the year and was named Lehigh Valley Player of the Year.

Her success continued into her junior season. Despite a minor injury that forced her to sit in the beginning of the season yet again, Vallely took control of Muhlenberg’s all-time assists record and left many people wondering if anyone could stop her rise to the top.

Now, close to the conclusion of her final season, stopping Brandi Vallely seems almost impossible. On Jan. 6, Vallely’s nine assists against Washington College earned her sole possession of the Centennial Conference all-time assists record, a feat that took her 45 fewer games to achieve than the previous record holder. With three games left and under 70 assists separating her from the now second-highest number, her spot looks secure for some time.

On Jan. 23, within reach of a valuable milestone, Vallely sits in the locker focused on “trusting our stuff,” her favorite advice from Rohn. Art and Judy Vallely sit in Memorial Hall. They have beat their own daughter to the gym, eagerly waiting on the sidelines hours before tipoff, ready to watch their youngest daughter make history. Art may be a hall-of-famer but tonight he is the dad of one of Muhlenberg women’s basketball’s best players.

Eight minutes and 22 seconds after draining a three pointer on the first possession of the game, Vallely steps to the foul line. She plants her feet, dribbles three times, spins the ball between her palms and shoots. The ball slides through the net and Rohn immediately signals a timeout. Teammate and roommate Christina Manning shakes her shoulders and the allotted 30 seconds should give number 11 plenty of time to celebrate becoming the 11th player in Muhlenberg women’s basketball history to reach 1,000 points.

A young Brandi Vallely sits on the bleachers in a small-town gymnasium. She ignores the game unfolding before her and flips to the next page of her Nancy Drew book. Nancy Drew is a game-changer – a headstrong girl who gets harder to beat with each case she solves. She is the best at what she does.

In a little over a decade, Vallely will be the same, a player in sole possession of record after record, both at Muhlenberg and in the conference. She has continued her father’s legacy, being the best at what she does.