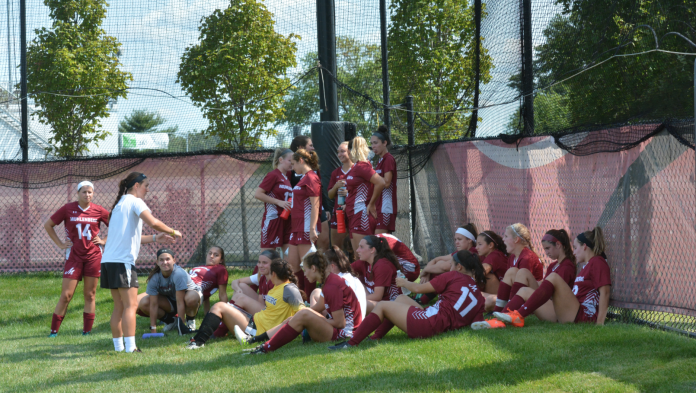 Fresh after graduating from Indiana University of Pennsylvania and still unsure of exactly what she wanted to do with her degree, Anna-Kate DePaolo went online in search of a job. She landed on an opening as an assistant women’s soccer coach at Muhlenberg College, a small college that she’d barely heard of, forty minutes northwest of her Perkasie, Pa. hometown.

Four years later, DePaolo, better known by her nickname Tattie, has become a well-known staple of the Muhlenberg Athletic Department. A member of the strength and conditioning staff and the women’s soccer assistant coach, she also spends her time on campus working different sporting events. But following four seasons on the Varsity Field sidelines, DePaolo is leaving Muhlenberg after accepting a full-time assistant coaching position at Washington and Lee University.

“It was really easy to get invested here,” said DePaolo. “The community feel and the people that I work with make it really easy to want to get involved in all aspects. And the way the department is set up, it really gives me an opportunity to do that with second duties and all that, like game operation and game management. I’m able to meet a lot of different athletes and people.”

What set DePaolo from the rest of the coaching staff was how close she was to the players. Joining the team when she was just a year older than some of the players, she found it easy to connect with her players both on and off the field — and the feeling was mutual.

“I think my favorite memory of Tattie is when I would run into her on campus and she’d just stop and talk with you and ask how you were doing,” said Sarah Theurer ‘19. “It’s so simple but it meant a lot that she cared about my life outside of the soccer field and not just on it.”

Makenzie O’Brien, ‘19, an outside back, also expressed how she appreciated the connections DePaolo was able to create among players. “To me Tattie was more than just our Assistant Coach and Strength and Conditioning Trainer, she was a friend,” O’Brien explained. “During the spring season, we have a tradition after morning lifts of going to breakfast in the dining hall. It means a lot to me that Tattie cares for her players off the field and out of the weight room. Our morning breakfasts may have seemed small, but became a tradition that helped build a relationship with Tattie on a more personal level.”

DePaolo also knew what made her players tick. Even if that meant keeping things on the field fun and loose. Muhlenberg goalie, Libby Juliano ‘20, explained how DePaolo was able to calm her high nerves before a tough contest against top Centennial Conference contender, Johns Hopkins: “Going into the game I was so nervous. Tattie was able to loosen me up and calm me down by cracking her countless jokes and singing so loud to the playlist playing in stadium.”

“It was really easy to get invested here,”Anna-Kate DePaolo

“I want to be a head coach, so this is a really good step for my career path,” said DePaolo. “I’m just excited to take on new opportunities, a little bit more coaching administrative type of stuff. I can really just focus on that. Here I was really drawn a bunch of different areas which is great for getting a bunch of different experiences, but now I can focus in on that one.”

For Tattie, despite her love for the players and the Muhlenberg community, this is the logical next step, but that doesn’t mean her Mules won’t miss her. “I am going to miss Tattie not only at games and practice but off the field because she was more than a coach to me,” said O’Brien.

“I’ve met and created some great friends and colleagues and mentors, and I think that’s going to be really influential in my life. But I’m also very grateful for it.”