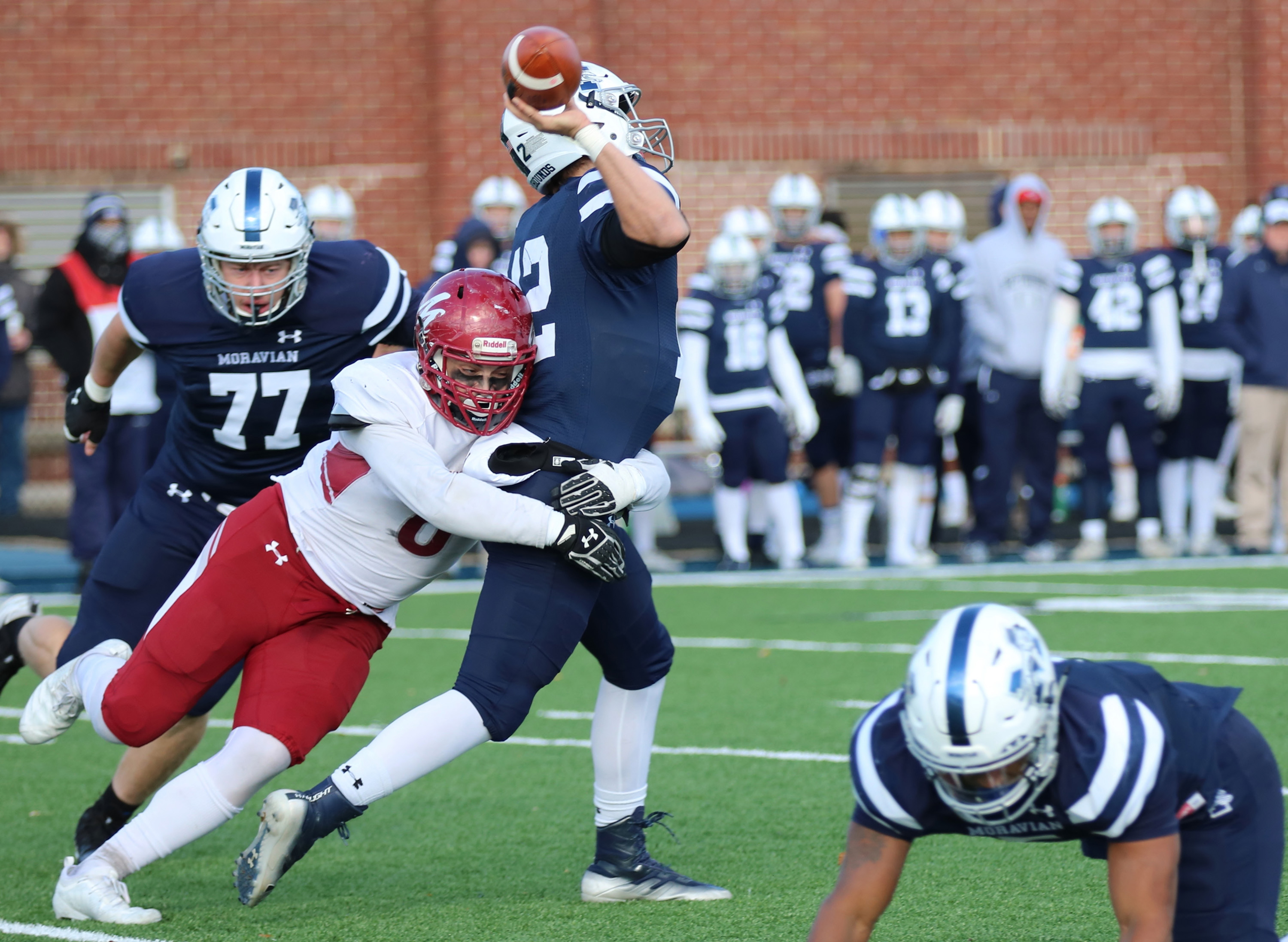 Quarterback Michael Ruisch and Running Back Da’Avian Ellington have been spark plugs for the Riverhawks’ potent offense that would pose a challenge for the Mules’ elite defense. With the bleachers at Scotty Wood Stadium filled to the masses on an 85-degree homecoming Saturday, the stage was set for another nail-biting game between the Mules and Riverhawks.

Midway through the first quarter, the first big play for the Mules came on special teams thanks to Frankie Feaster ‘21’s block punt setting up the Mules at midfield. After a big pass play from Michael Hnatkowsky ‘21 to Max Kirin ‘20, the Mules found themselves in the red zone. Tight end Ryan Curtiss ‘20 scored a two-yard rushing touchdown, lining up from the quarterback position in the Mules’ new wildcat offense. The Riverhawks offense responded with their next drive by moving the ball into Muhlenberg territory before Ruisch’s pass attempt to the endzone was intercepted by Jay McGill ‘22.

After both teams traded scoreless possessions, Feaster once again came up big on special teams, blocking his second punt of the game and setting up the Mules’ offense with another short field. The second block of the game came just two plays after Feaster recorded his first sack of the game. Unlike the first blocked punt, the Mules could not take advantage of the short field, as Hnatkowsky threw a red zone interception.

The Riverhawks responded with a drive lasting over five minutes and were able to put their first points on the board after kicker Elijah Hoffman nailed a 35-yard field goal.

Heading into the locker room at halftime, the score remained 7-3, as the two teams struggled on offense combining for three interceptions. After receiving the ball first to begin the second half, the Mules orchestrated a drive lasting over seven minutes that resulted in Curtiss’ second touchdown of the game, this time on a 15-yard reception from Hnatkowsky. Once again the Riverhawks’ offense responded off of a Mules touchdown, with points this time on a 14-yard scramble by Ruisch on a five-minute drive aided by a crucial roughing the passer penalty that would have set up a 3rd and 15 at the Muhlenberg 43-yard line.

Muhlenberg failed to score on their second and final drive of the third quarter, setting up yet another thrilling finish between the two teams. With Muhlenberg forcing a punt early in the fourth quarter, the Mules’ offense came out firing, driving the ball into Susquehanna territory. As the Mules entered the red zone, the Susquehanna defense kept their composure and forced two incompletions to set up fourth down. Kicker Todd Spirt ‘20 added his third field goal of the year, this time from 35 yards out, and the Mules found themselves up by ten with just under 10 minutes to play.

Another forced punt by the Mules had the offense seeking to put the game with another score. Key runs by James Diggs ‘21 and a 17-yard reception by Nick Ugarte set up another offensive drive in Susquehanna territory. With their backs up against the wall again, the Susquehanna defense was able to force a fourth and nine at their 32-yard line. A substitution infraction on the Riverhawks moved the ball five yards forward and the Mules decided to try and take advantage of the miscue. Hnatkowsky’s completion to Mitch Daniel ‘21 fell one yard short of the first down marker, and the Riverhawks took possession at their own 24 with just under three minutes to play. Ruisch stepped up and found Kyle Good for an 11-yard completion, and 15 yards were tacked on after a Mules penalty. The Riverhawks offense took advantage of another Muhlenberg penalty, and Ruisch was able to connect with Mikah Christian in the back of the end zone on a 36-yard touchdown pass to tie the game and force overtime.

The Mules began overtime with the ball, and on third and seven, Hnatkowsky found an opening in the middle of the field and scrambled where he would set up first and goal. Mark Riggio ‘20 scored on the next play thanks to great blocking from the left side of the offensive line. On the next Riverhawks drive, the offense moved the ball inside the 10 yard line, but Dante Lonardo ‘20 forced a long fourth down with a sack on Ruisch. On 4th and 11, the Mules secondary forced Ruisch to scramble for a fourth down, and Daymon Fleming ‘21 stopped him just short to secure another Mules victory.

The game was finally over and the entire team flooded onto the field. Emotions visible on their faces, the players and coaches found each other, hugged one another, and in screaming fashion congratulated one another on their performance.

Prior to exiting the field for the locker room, Coach Milne had some words for his men. He explained how proud he was of them and made sure to tell them that while they must enjoy the moment, they must also be prepared to come back next week and perform with the same mentality and grit, according to Diggs.

Going into next week, the ninth-ranked Mules head to Huntingdon, PA to face Juniata. The Mules are looking to add another win and build off of yet another dominant performance and start the season 4-0 for the second straight year.