Home Op/Ed To my family at The Weekly 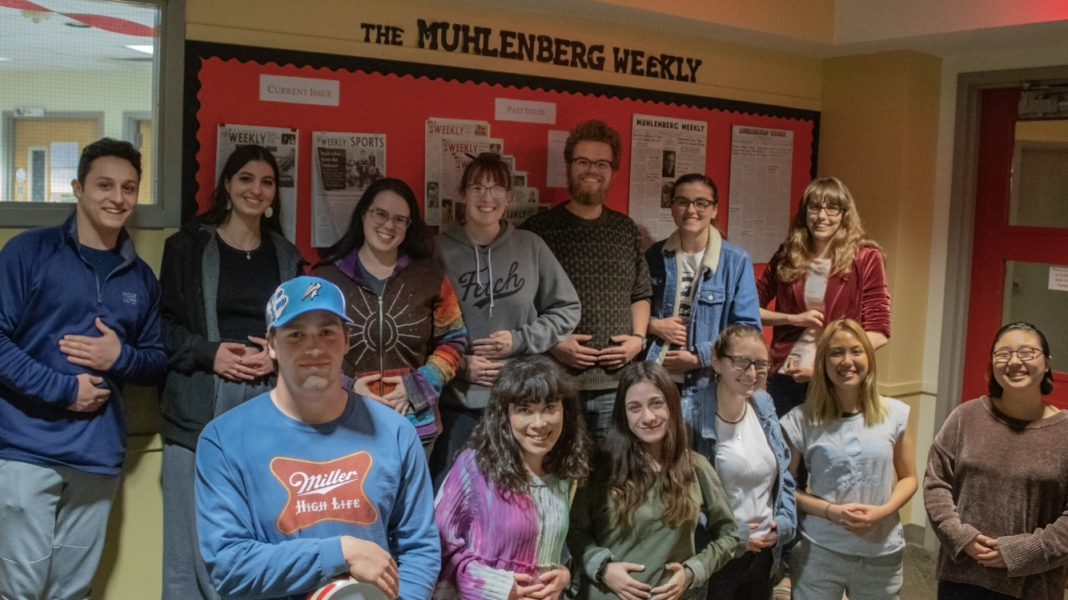 Suddenly, all was quiet. It was the point of the night when the bustle of the student newsroom, the shouts of “one last edit” or “the Google Doc is linked!” or the squeak of wheely chairs skitting across the floor dwindled down into the sound of GQ wrappers crinkling. I’m sitting off to the side, writing a discussion post that’s due at midnight, while the rest of the staff sits around the white square table in the middle of the room, eating the meals they’ve gotten with the GQ vouchers we get in exchange for advertising. Some of Emily’s K Pop is playing softly in the background. Maybe it was Will Wamser who asked first, or Ji Ku, but suddenly all the editors were going around the table, each taking turns asking each other the same question: what are you doing over spring break?

“It’s like we’re a family,” said Emily, with just a hint of sarcasm, a fork in her chocolate cake, “having dinner together, talking about our break.”

I ducked my head into my computer screen. I was hiding a smile. She gets it.

To say my last four years at The Weekly have been chaotic would be an understatement. It’s all been a blur of looming deadlines, grabbing sources, articles falling through, midnight updates, 2:00 a.m. copy edits, one last change…

And it’s all been worth it. Because in the end, it became less about journalism, less about “the paper” and more about the people.

I was a commuting student for my first two years at Muhlenberg. I didn’t have a hall or a roommate — and I was convinced I didn’t want one. Ice-breakers that year always consisted of asking “What dorm do you live in?” In an environment where people would immediately group you into the “quiet” (Brown) the social (Prossor) or the semi-normal (Waltz), I was uncategorized. My place on campus wasn’t in the freshman quad, but in the basement of Seegers in The Weekly office. Instead of a freshman hall, I found myself every Tuesday night in the The Weekly office, with Greg, Jack, Lauren, Holden and Alyssa.

My little family started just with those five. Then came Brooke, Sara, Emily Davidson, Melissa, Ian, Will, Emily Drake. Then Alex, Laura, Jason. With each new edition to the staff, a new generation of The Weekly was born. More laughter. More inside jokes. More colorful post-its in various handwritings appeared on our “quote wall” with phrases like: “carrot on a stick!” or, my personal favorite (said by the editor-in-chief my freshman year): “the only reason I’m here is because Beachbody Bootcamp was canceled!” While making a video for The Weekly, I taped up old foamboard articles to the the bright red door we share with the student lounge and performance space, where the sound of Rocky Horror picture show often drifts through and causes us all to groan in agony.

This office became our home. Four years later, our masthead has swelled to nearly three times that size — the growth I’ve kept track of, not in the staff photos, the size of our group chats or the font size on our masthead, but the number of treat bags I buy on holidays to thank editors for spending their “special” days in production.

The family we have now is an incredible one, I realize. I’m the frazzled but loving mom. Matt is the stepdad who’s tired of everyone’s crap. Lauren is the eccentric aunt. Will is the odd cousin. Emily is the stubborn younger sister. Ji is the ever-happy middle child. Alex is the office puppy. Jason is the older, jock brother. Laura is the sassy, fashionable younger sister. Sydney is the sister-in-law who quietly wonders what she married into. Melissa is the aunt who shouts a DC comic reference from the corner of the room. Jess is the epitome of adorable, the artsy aunt in a french beret. Arielle sits curled up and takes it all in. Karly and Jarrett are the family comedians. And Sara, our advisor, does her best to keep us all in line. And I look across it all and think of who they’ll all become, what new generation will take shape when the wonderfully wordy and gifted Brooke takes the reins next year.

As I, like my predecessor, pull the door closed for one last time, I look back at the room where I spent every Tuesday since October of my freshman year. I hope to — or, should I say, threaten?— one day return for one hell of a family reunion.

Back in My Body: How Meditation Helped Me Heal and Take My Power Back