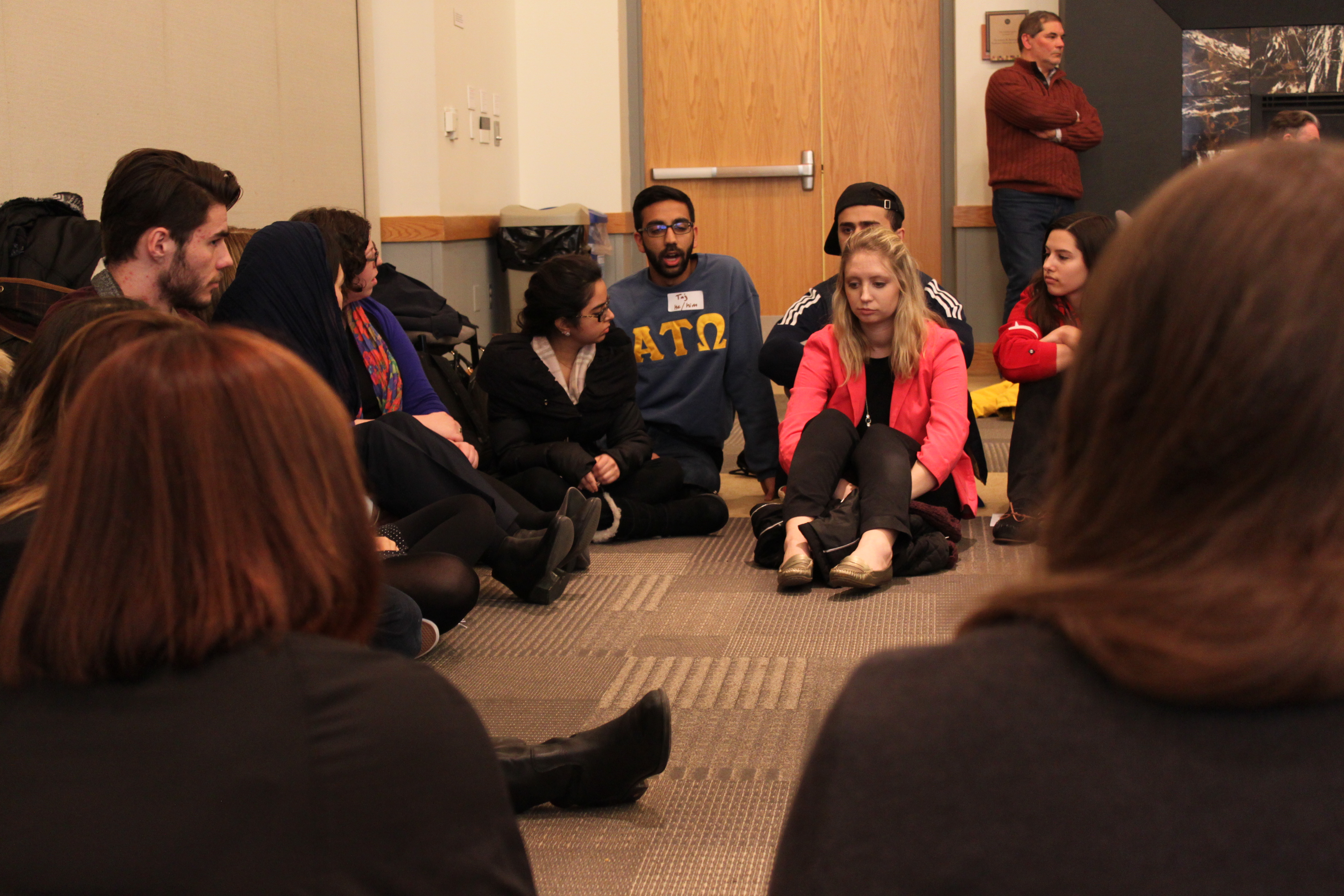 On Friday Nov. 10, Muhlenberg hosted Jane Sanchez Swain of Princeton’s Pace Center for Civic Engagement for a workshop on diversity and inclusivity on campus. With nearly 100 people in attendance, Sanchez Swain spoke to a mix of students, faculty and staff.

The workshop began with a speech from Dean Gulati welcoming everyone and thanking them for their commitment to working towards a more inclusive campus. She also thanked the College’s Bias and Resource Education Team (BRET) for putting together the event before turning over the mic to Sanchez Swain.

Sanchez Swain opened by saying, “Social justice and bias intervention is everyone’s job,” before going into a brief overview of what the workshop would cover.

Introducing herself as a first generation “person” with Peruvian parents, Sanchez Swain explained that she never experienced being different until she reached college. It was an eye opening experience because, as she describes, the community in New Jersey where she grew up was so “homogenous.”

The college experience is what allowed her to start focusing on social justice, diversity and inclusivity and teaching others about it. “My work at Princeton with the Center for Civic Engagement is really just a vehicle,” Sanchez Swain explained.

Inclusion; it’s not about everyone being the same. It’s not about finding that ten point list that’s the same

Following Sanchez Swain’s introduction everyone broke off into small groups for an activity highlighting differences and similarities. It demonstrated that while it is very easy to find something unique about oneself, it can be extremely difficult sometimes to find more than the most simplistic commonality.

“Inclusion; it’s not about everyone being the same. It’s not about finding that ten point list that’s the same,” Sanchez Swain said after the activity. She explained that inclusion is about accepting people for their differences.

The next activity consisted of a “pair and share” on “What does it mean to be an inclusive community?” During this attendants turned to a partner to talk about what they believed made a good inclusive campus and what hurt one. Sanchez Swain then invited everyone to share what they discussed.

One student mentioned that “maintaining diversity” is what would help make campus more inclusive, explaining that currently, people of color are being recruited and then not allowed to feel comfortable or prosper on campus.

As something that prevents inclusivity, a student said that their group talked about “dishonest self-reflection of ‘we’re super inclusive’ and that’s preventing us from thriving.”

In response to this idea of “dishonest self-reflection” Sanchez Swain asked the question: “How do we bring people who aren’t always showing up [to events like this] to learn?”

While there was no response to this, nor did Sanchez Swain seem to expect one, it was something to think about.

She then explained that there are three different types of bias — prejudice, stereotype and discrimination — and what they contribute to.

“A combination between prejudice and institutional power that discriminates against specific groups,” is what Sanchez Swain defined oppression as, showing that bias plays a large role in it.

Sanchez Swain also brought up a buzzword that often goes with social justice conversations: privilege. “It’s not an insult,” she stressed, saying that someone has privilege is not an insult as it refers to factors that allow someone power. “Power is not inherently bad, it’s what you do with that power.”

She then did an activity that included a description of an incident and asked for the group to decide whether it was a bias incident or a hate crime.

Following this activity, Sanchez Swain showed a video on empathy by Brené Brown and then opened up a discussion about what empathy is and means. As for herself, Sanchez Swain said that thinking about empathy makes people think about the phrases they use when they speak.

“A response doesn’t necessarily mean a solution,” one student said as part of the discussion.

“I don’t want you to solve my problem, just listen to me,” Sanchez Swain added in response to the student. “[Empathy is about] listening to understand and not listening to respond.”

Sanchez Swain ended the workshop with ways to respond to bias incidents, giving everyone a handout with phrases and options of things to do when responding to a bias incident. “I want to highlight this idea of calling people out versus calling people in,” Sanchez Swain said. She then explained the difference between the two: ‘calling out’ shuts something down and causes people to become defensive while ‘calling in’ is more educational and involves taking people aside to talk with them.