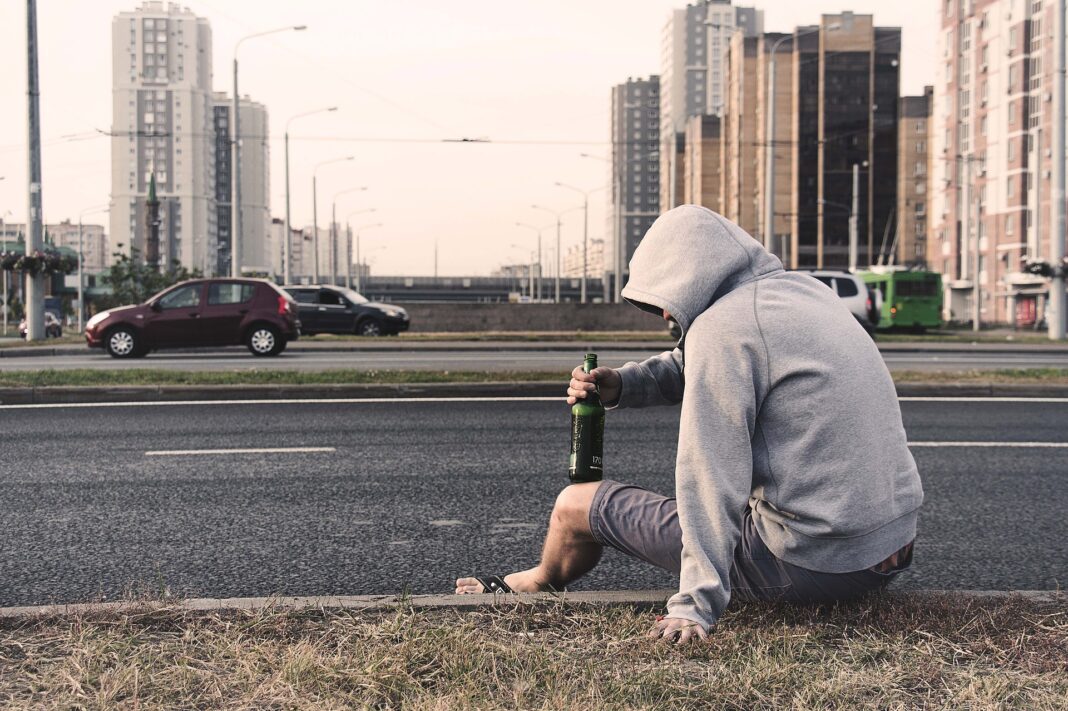 An ambulance siren wails on a quiet street in Long Island, New York.

Three EMS workers rush out of a basement with a stretcher carrying an unconscious 15-year old with a pale face and purple lips. Three frightened teens stand in disbelief as they watch their friend get carried away in the ambulance. Jake is on the verge of death as he is brought into the hospital. His mother holds the boy’s hand in the ambulance and with the other grips her phone as she explains to her husband what had just happened, her ghostly face and dried tears looking as if someone had just died. A nurse cleans a tube before inserting it through the boy’s mouth into his esophagus.

On July 17,1984, President Ronald Reagan signed the National Minimum Drinking Age Act requiring that states raise the drinking age to 21 or face a 10 percent cut to their federal highway funding. All states abided to the higher drinking age, yet even with a legal drinking age in place, 7.1 million young people ages 12–20 reported that they drank alcohol beyond “just a few sips” in the past month in a 2018 survey.

Jake had consumed several vodka screwdrivers that evening and if he had one more drink he would’ve died, especially because he and his friends were swimming in a pool that night. His friend’s mother only called 911 only after he collapsed on the pool patio. Since the legal drinking age is 21 in New York, Jakes’s friends were hesitant to tell the emergency workers what they were doing. Any more time lying unconscious would have cost him his life that day.

Leslie, a college freshman, was admitted to a near campus hospital just a few weeks into her first semester. “It was protocol to call campus safety when an RA saw I had been drinking, it was the first few days of college and I had drank in high school and wanted to drink in college at a party as well. After going to the hospital, I couldn’t walk out of my dorm or sit in class without having to cry. I was scared and had anxiety attacks for the next two weeks. I would talk to my parents and immediately cry because I was so anxious for some reason. Time definitely helped and I was eventually able to trust myself with alcohol.”

Another freshman, whom I’ll call Mary, was admitted to the hospital two times in a span of two months for alcohol-related emergencies. “I’ve never really had great sleeping patterns but starting in the beginning of the semester I was having trouble sleeping. I was waking up a lot during the night and that never got better so the effects kinda built up and I was exhausted all the time. I was so tired I couldn’t get any work done. We tried a lot of different sleep remedies like different doses of melatonin but nothing worked. My parents didn’t really realize how much it was affecting me. Since I wasn’t really sleeping, my anxiety was heightened and both times when I went to the hospital there were social things that I was kinda stressed about so I think that subconsciously those were in the back of my mind when I was drinking.” Mary ended up working with therapists and sleep specialists to help her find tools and techniques to work through her anxiety and insomnia. “I have such a different outlook on drinking after these experiences and I haven’t drank since the second incident nearly five months ago. I still went to parties with my friends which helped me realize that I can still have fun without drinking and when I do decide to drink again in the future I will definitely keep this in mind and have a better understanding of it’s really worth doing so because getting to that state just isn’t fun for anyone involved.”

According to the CDC, while the purchase of alcohol by persons under the age of 21 is illegal, people aged 12 to 20 years drink 11% of all alcohol consumed in the United States. More than 90% of this alcohol is consumed in the form of binge drinking. And to prevent students from hiding drinking-related medical emergencies, almost every state in the U.S. grants intoxicated minors a limited legal immunity when they seek help for themselves or another individual who is in need of immediate medical attention.

“If I was at a bigger school where this happens a lot more often, I probably wouldn’t have been taken to the hospital in the first place,” said Mary. “Going to the E.R. is definitely what made me realize that what I was doing to myself was dangerous. Since I have had this realization I think I’ve grown and matured so much that when I do start to drink again I will be able to be a lot more conscious and smart about what I choose to do. I also definitely wouldn’t have been able to get the help that I needed without all of my friends supporting me and not forcing me to drink, I feel like at a bigger school I think I would be more pressured to drink even if I didn’t think I was ready.”

Another student whom I will call Rachel, is also a college freshman but from a much larger university. “ I go to what’s known as a big party school, with a student body consisting of over 17,000 students,” she explains. “This large party scene can easily be seen by driving down Main Street or East Cleveland on any Thursday, Friday or Saturday night and seeing the crowds of people walking from one party to the next. While yes, I do have to admit this is fun, is this party scene really the safest for students? Like any college campus you have a lot of freedom, but when you are 1 of 17,000 it is obvious how much easier it is to put yourself at risk when compared to a smaller school of only 2,000 students.”

At larger schools, it can be more difficult to pinpoint specific students in a crowd that need medical attention when they’re overly intoxicated. “With so many people partying, it is just harder for campus security and police to be on top of everyone, you can almost get away with more,” says Rachel. “That’s why it’s up to you to learn your limits of drinking and be aware of them every time you participate in underage drinking or partying. From personal experience, when you or a friend drinks too much or is in a dangerous situation, it is most of the time up to you and your friends to get out of it. Because of the larger student life, you are less likely to be “caught in action” of doing something worthy of being written up. While this way of living can be seen as positive, because it teaches you responsibility that you need later in life, you definitely have to be more aware of your surroundings or risk putting yourself in real danger.”

“I think many people our age ignore the legal drinking age because it’s a part of society to experience drinking at an early age, like going to parties with friends where alcohol is usually involved,” says Danielle, a first-year. “Personally, I didn’t go to many parties in high school but I did drink occasionally. In college, many of my friends have gone to the hospital as a result of drinking too much which definitely scares me. I partake in alcohol consumption even though I’m underage, but in moderation. Everyone I know drinks, so I think it’s honestly a societal thing and about fitting in. I drink a lot less than most of my friends because I don’t see the benefits of getting super drunk every night. Being tipsy is just as much fun as being drunk because you let loose and dance without caring but you don’t feel the side effects and you have control over your actions.”

When the Reagan administration established drinking regulations, they were based on the idea that brains are less mature before the age of 21. Drinking is more harmful to teens than adults because their brains are still developing throughout adolescence and well into young adulthood. Drinking alcohol during this critical growth period can lead to lifelong damage in brain function, particularly as it relates to memory, motor skills and coordination. “At the age of 10 the brain doesn’t grow any larger. However, the frontal lobe develops up to age 25,” said Tim Silvestri, director of counseling services at Muhlenberg. “The difference between an 18-year-old and a 25-year-old is the frontal lobe maturation. You see some frontal lobe maturation which is the decision making part of the brain.”

According to The National Institute on Alcohol Abuse and Alcoholism, it is natural for children to want to take risks and assert their independence. Teenagers are attracted to alcohol but overlook the effects on their health and behavior. Young people drink alcohol for many reasons including peer pressure, increased independence, stress, and easy access to alcohol through family members or liquor cabinets at home.

According to researchers at McLean Harvard Medical School, low levels of γ-amino butyric (GABA) could be one reason why adults and adolescents react to alcohol effects in such different ways. This region is responsible for planning, organizing, short-term memory, decision-making, and cognitive control and teens have less GABA in their frontal lobes. A combination of low GABA and binge drinking could contribute to teens taking greater risk, which can lead them into dangerous and sometimes fatal situations that their still-maturing brains do not always recognize as harmful.

Back in 2008, a non-profit organization made up of U.S. college presidents calling themselves the Amethyst Initiative launched a effort to reduce underage drinking by lowering the drinking age. The Initiative argued that the current drinking age could be problematic for college students because binge drinking is much more prevalent and dangerous. Most of these actions occur in non-supervised off-campus housing where some young adults are of legal age to drink and some are not, which could cause more binge drinking. The Initiative also mentions that students choosing to use fake IDs make ethical compromises that erode respect for the law. Fake IDs cause economic damage to liquor businesses due to suspensions and revocations of liquor licenses which can affect employers, owners, investors, suppliers and vendors.

The Initiative seems to have disappeared and there still seems to be no real solutions to the problem of underage drinking on college campuses. We trust students under the age of twenty-one to vote, sign contracts, serve on juries and enlist in the military, but can’t trust them with a drink.

Image by Лечение Наркомании from Pixabay

Why did you come here?

Does Catholic school lead to tranquility… or trauma?