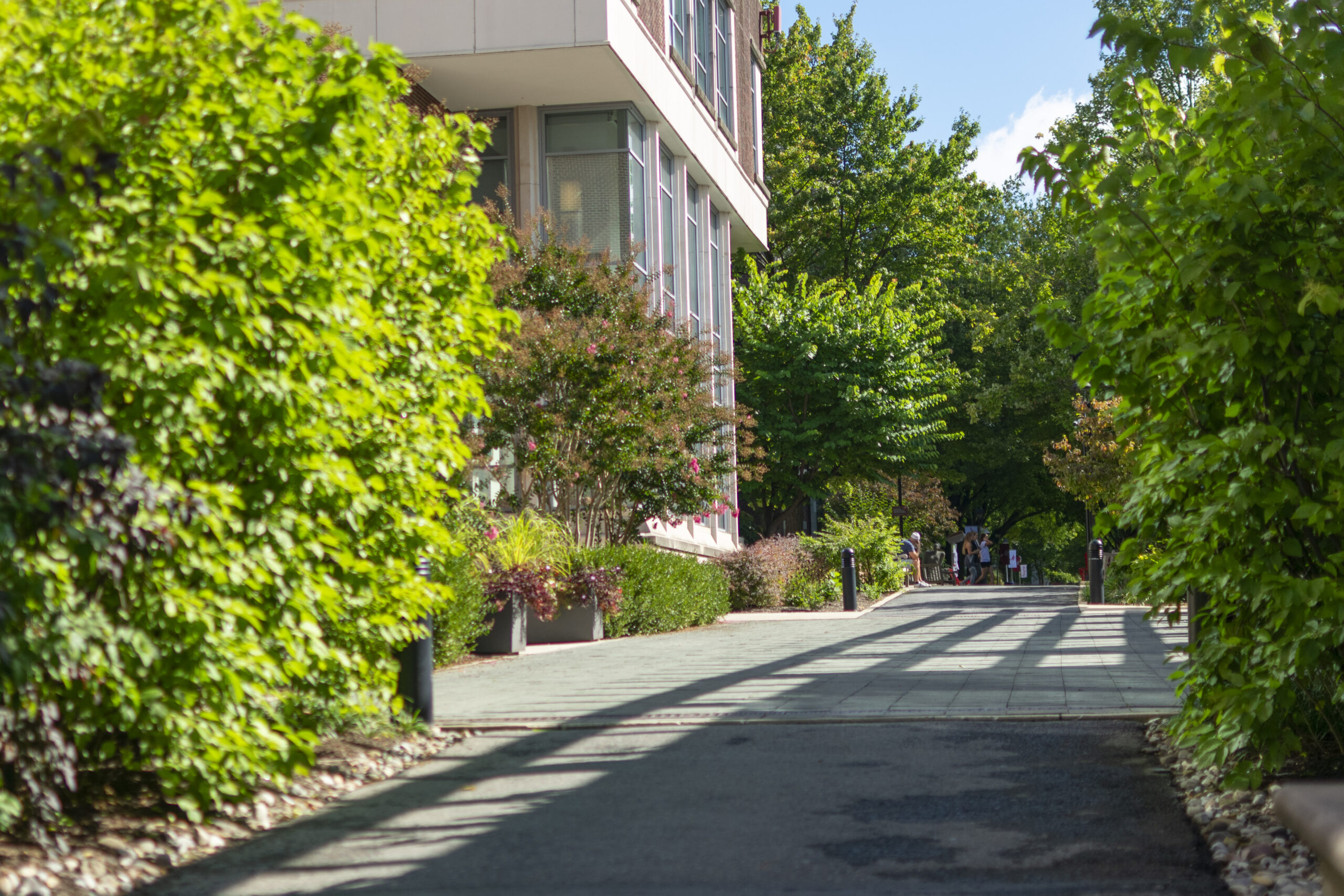 It was 2 a.m., six hours away from the new semester, as I stepped out to the arrival terminal at Newark International Airport. The air was blistering cold, almost unwelcoming. My semester ended less than a week ago in Taiwan and I was already about to start a new one. I just transferred from National Tsing Hua University in Taiwan (NTHU) to Muhlenberg College as a sophomore. I was on the other side of earth from my home.

Having just endured four final exams at NTHU, the nerve-wracking student visa application, five vaccination stabs in 24 hours, and conflicts with my family, I was too numb to even question whether I had made the correct decision to transfer. But after some hours of rest, I started my new semester at Muhlenberg with an advanced physics course, electromagnetism. This course is required for physics majors and many Muhlenberg students describe it as the hardest physics class. But when the class started with an overview on basic vector algebra, a topic that is taught in ninth grade in the Taiwanese public-school curriculum, I began to have doubts that I made the right choice. My friends in Taiwan already completed electromagnetism, as it is a low-level required course in the Taiwanese curriculum. As my concerns grew about whether Muhlenberg’s curriculum would adequately prepare me as a physics major, I had to stop and remind myself why I decided to leave Taiwan in the first place. I was looking for the freedom to explore. I didn’t want to be restricted to a single field of study.

In Taiwan and many nearby eastern Asian countries, there is an interesting characteristic embedded into the culture. Asian students tend to perform incredibly well in math and science. According to the Programme for International Student Assessment (PISA), eastern Asian countries take up almost the entirety of the top five performing countries in math and science. Estonia is the only non-Asian country in the top five. The United States is well below the average in math performance, yet it is the home to global technology innovations from companies like Apple, Google, and Microsoft. Knowing more about electromagnetism at a younger age hasn’t been much of a boost when it comes to creating the next iPhone or Tesla.

Sitting on my right in my electromagnetism class is Adeeb Saed ‘22, a double major in physics and math. “You guys at NTHU look like you’re taking all the courses also required here at Muhlenberg,” says Saed, “but just twice as many units (per course.) They probably go deeper in depth, but I think what we have here at Muhlenberg is sufficient. More importantly, I think it already shows I’m a ‘teachable’ person, able to tackle future intellectual challenges.” Jonah Silverman ‘22, who is majoring in math with a concentration in statistics, agrees with Adeeb. He says the difference between the two schools is that while they teach the same course titles, Muhlenberg covers much less in depth.

“I am prepared to stay an extra year at school to finish the computer science double major if my major transfer application gets declined,” says Wei-Chieh (Jackson) Chien ‘24, a student at NCTU who wants to change his major to computer science. “I really wish the school is as flexible as yours (Muhlenberg). No application requirements for switching majors. No extra year to earn a double major.” Worried I would be ridiculed for the now significantly lower major requirements after transferring to Muhlenberg, I was surprised that Jackson wasn’t critical of my coursework. “Yeah, I think the requirements at your school are sufficient. The thing about Taiwanese education is that everything from exams, quizzes, labs, to something as small as assignments, they all must have a ranking for performance. Therefore, these exams, quizzes, and assignments are never meant to be completed by the deadline by all students. If that happens, that means the tasks are too easy, and the students have time for more.” As horrible as it may sound, Jackson admits that this form of education trains students, especially in computer science, to become a Swiss knife for future employers, being able to tackle any given task.

The different curriculum structure seems to truly have an impact on plans after college. Graduating with a math major imprinted on his diploma, Jonah Silverman ‘22 did not in fact enter Muhlenberg intending to study math. Instead, he was accepted into the accelerated occupational therapy program offered in cooperation with Thomas Jefferson University. “I just kinda fell in love with math and coding when I took calculus and introduction to computer programming when I was a freshman,” said Jonah, recalling his transition from occupational therapy to mathematics. “I guess the clinical environment just isn’t for me. I don’t like interacting with so many people on the job.” He also cited influences from interaction with faculty and clubs. The Nerd Club, led by Jorge Silveyra, Ph.D. an assistant professor of computer science, is a place where people gather and study competitive programming, advanced algorithms, and data structures. It is also through this club that I got to know Jonah. “Over the past four years I have been involved with many research projects and experiences like Nerd Club,” explains Jonah. “Through these experiences I have gradually shifted my focus onto software development and the intersection between biology and mathematics. I am joining a biotech startup after graduation where I can learn and do more in computational biology.” As for Adeeb, he plans to pursue a Ph.D. program simply because he wants to learn more about nuclear physics.

Jackson, speaking from the other side of the earth, does not get to experience the varieties of graduate destinations. From what he has seen, almost everyone studying computer science has one goal after college. “Go to the Park, make money, and buy a house.” The Park he is referring to is the Hsinchu Science Park.

Hsinchu Science Park, or the Park, is where the Taiwan Semiconductor Company (TSMC) is located. Taiwan, other than often being confused with Thailand and its ongoing geo-political feud with China, can probably be seen in the international press when TSMC is mentioned. Responsible for manufacturing 92% of the world’s advanced chips, TSMC and its related businesses are the backbone of the country’s economy. Taiwanese people jokingly call TSMC the “Holy Mountain” because it is the only thing stopping a total invasion from China, as such action would severely hurt western economy. TSMC and its related businesses are all located in the Park. The reward for working for a company that plays such a big role in the country’s economy and even politics is a much higher salary. But it also comes at a cost — Taiwanese are the second hardest working labor in the world.

With his school’s campus right next to the Park, Jackson wishes his curriculum left more space for the students to explore the world beyond the classroom. “Everyone here only ever talks about grades,” he explains. “It’s not like we want to, but it’s the only thing we’re allowed to do as a computer science or any STEM major in general.” He then shared his opinions on the importance of cultivating hobbies. “We really need time to ourselves in order to exercise some intellectual freedom. I know the importance of getting ourselves ready for work after college but preparing us for “every” kind of work is just too much. Plus, doesn’t the fact that we’re only trained to code, make us pretty replaceable in the long run? After all, that’s what we’re only capable of doing.” He then proceeded to share a story he saw in the archery club. “One of the seniors on the archery club literally just stopped showing up one day. He said he needed to prepare for job applications for the Park. The senior said archery can wait after he’s earned money. That just sounds really sad, but it is perceived by the Taiwanese public to be the “right” thing to do.”

We also talked about the perfect example of the significance of free time in a STEM career. The story, which we both ironically learned in a high school English textbook, is about Steve Jobs and his experience taking calligraphy at Reed College, a liberal arts college in Oregon. The moral of the story is that the calligraphy course later helped Jobs create the computer with the most beautiful typography. The freedom Jobs was given to pursue multiple fields indirectly created Apple, a modern day tech giant.

Covering all the necessary knowledge required by their respective fields, both Adeeb and Jonah have slowly cruised through their college lives and with the help of faculty and participation in independent projects and activities, found their passion and landed on destinations that excite them for continuous career growth.

“Where do you want to go after college?” I asked Jackson as my final question during our lengthy Google Meet interview that also served as a quick catch-up chat after I left Taiwan promptly without much notice.

“Probably graduate schools in the United States, or any foreign graduate programs will do.”

Jackson sighed and took a breath to finish his sentence.

“At least to leave Taiwan.”