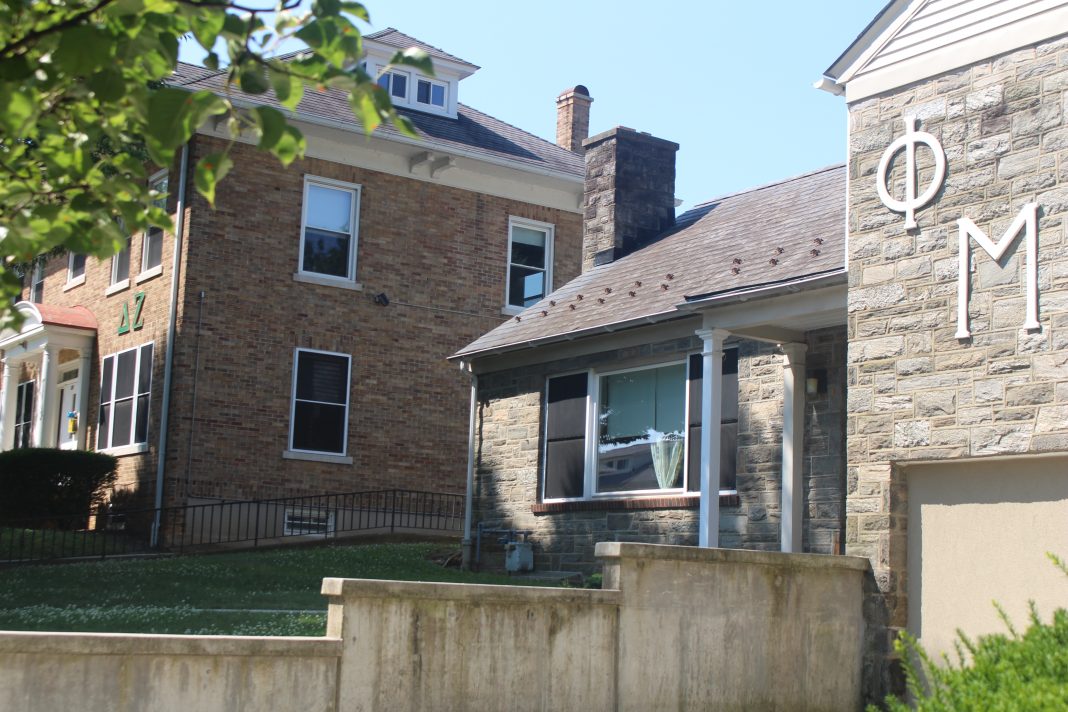 Residential life in a college town

The clocktower’s noontime alma mater echoes down the tunnel of trees speckling Gordon Street in Allentown, Pennsylvania. In the shade of the giant sycamore a skinny, two-story house sporting the letters Delta Tau Delta stares across the street at six sharply square, tudor and brick detached homes. The smallest one on the corner stares back out of its three top floor windows, an American flag waving in its front lawn.

Barbara Brockman Claypool, a middle aged woman who speaks with a rich southern accent, sits across from me as her house sits across from the fraternity’s, the tips of her silver hair dyed purple to match her plaid shirt and teardrop earrings. Claypool has lived in this house with her husband and greyhound the last five and a half years.

“We loved the historic feel of the big old homes,” said Claypool. “The appeal of living close to a college campus was a draw. When we looked at this house, I said ‘if we buy this house, I will work there.’ Because I have a background in higher education, it made perfect sense- I could walk to work. And we liked the energy of the young people being around.”

Claypool is now the Administrative Assistant of Career Services and works in the student union building.

She was shown her house in the summer, and had noted that the President of the College’s house was diagonal across the street from her, separated by a high hedge from the other three greek houses on that block.

“We thought if he lives there, if the president lives there, this area should have some kind of a modicum of control,” said Claypool.

What she was not prepared for were students shouting vulgarities, drunk girls peeing in her yard, and students throwing beer bottles over her fence.

“I will just say, as a resident … It has been more difficult to live there than we anticipated” said Claypool, “simply because of the noise, student traffic, ie pedestrian traffic, during the week as well as weekends, can be very loud and vulgar.”

Students’ actions have put Claypool and neighbors alike in uncomfortable positions. The  streetlight on the corner of her block is often a gathering place for drunk students on a friday night.

“I’ve hollered out my window ‘go away, keep moving, take it inside.’ Because I don’t want to call and complain to campus safety nor Allentown Police. But I’ve had no choice sometimes,” said Claypool. “It puts us in a really bad spot.”

The cancerous growth of Muhlenberg’s off-campus student housing has forced the City of Allentown to take precautions to protect both residents like Claypool and those unaffiliated with the college. One such example is the Allentown Student Residence Overlay District.

The Allentown Student Residence Overlay District is a zoning law, which is an agreement between two parties as to how a geographical space is to be used. The agreement states that only two unrelated students can live under the same roof within the given area specified in this ordinance, called the Overlay District.

The Overlay District currently stretches in a blocky, lopsided U shape around campus. The Muhlenberg Office of Residential  Services (ORS) defines the area as the space bordered by Washington Street on the north, 27th Street on the west, 19th and Leh Streets on the east, and Parkway Boulevard on the south. It was created by Ordiance 59 in 1997.

An article on the front page of the September 4, 1997 issue of The Muhlenberg Weekly states that Ordinace 59 was created to  “maintain the residential character of the neighborhood” and depicts the residents of Allentown as concerned for the “deterioration of a single-family neighborhood” into a college town.

The same sentiments were shared by some in September 2017, where Morning Call’s report on a town hall on the expansion revealed that homeowners were concerned with the resale values of their homes and the “wolf packs” of students “roaming from one party to another on weekends.”

Some were under the impression that the expansion would increase student housing, not decrease it.

On Feb. 21, 2018, the Allentown Planning Committee voted unanimously to expand the Allentown Student Residence Overlay District by one block north and west. This action, however, did not reduce the current number of beds available to students, but rather limits the rate at which more are acquired.

With the purchase of every new property, the college only gains two more beds unless the space is able to be renovated into separate units, then each unit may house two students. Everywhere else in the city, up to four students are allowed to live in a house at a time, reported the Morning Call. Only within the overlay district are students limited to living in pairs. As a result, there are several college-owned properties that have the room to house two students if needed, but are restricted due to zoning laws.

Katie Shelley, Assistant Director of Residential Services, explained that when the original ordinance passed, the two-student limit only applied to properties purchased by the College after ordinance 59 was enacted, meaning houses already owned by the College as student-only housing were exempt. As a result, there are select Muhlenberg off-campus properties, called Muhlenberg Independent Living Experience (or MILE) houses that are “grandfathered” in and can house up to four students; most of these properties became group housing. This ordinance, according to ORS, also applies not only to College-owned properties, but also any rentals that house college students.

Muhlenberg vs the city

When originally proposed in 1997, the College labeled the ordinance as discriminatory towards the students. This time around, however, the college has taken a more neutral stance, explained Dean of Students Allison Gulati. Not only does she see fighting this past year’s expansion on limitations as a waste of resources that could be put elsewhere, but the impact of the ordinance has very little on the campus anyway.

“This time we’ve been in lots of conversations… and expressed our concerns in how it would be be done. However, we have maintained a fairly neutral stance because likely any property with students in them that will be impacted will be part of that grandfathering process,’ explained Gulati. “We believe that keeping students relatively close to campus is important to their success as college students. So if you look at that map, some of those places that are included in the expansion students wouldn’t choose to live there anyway.”

Shelley pointed out in an article in The Muhlenberg Weekly, only about 10 percent of students are granted the ability to live off campus each year.

“We require students considering living off campus to complete an application,” siad Shelley. “We have to ensure that a range of our beds on campus are full in order to have a vibrant and healthy residential community on campus.”

This application is due each year at the beginning of February, at times long before some students know their housing situations. Preferences are given to the first seniors with clean disciplinary and academic records.

Additionally, Gulati pointed out, living close to campus is statistically better for students.

“All research related to student success in college states that when you live residentially, you are more likely to be successful academically,” said Gulati. “You are closer to health, academic, and social resources that you might need. You’re more likely to stay engaged in clubs and organizations on campus. And you’re less likely to skip class, be late to class, etc. For all those reasons, we want to keep students as close as possible.”

Additionally, Gulati pointed out, houses far off campus pose a safety hazard both to students and residents. Crossing Tilghman is dangerous when sober, added Gulati, not to mention after a night of partying. Most of these houses remain vacant over the summer, added Gulati, tempting burglaries and increasing crime rates. The additional rotation of students living there makes forming a cohesive neighborhood difficult for year-to-year residents.

As part of the Master Plan, Muhlenberg intends to build an apartment-style upperclassmen dorm with retail space on the ground floor, which will move more students on campus while also replacing beds in its temporary housing.

Claypool has praised Gulati for her initiative and positive impacts, and her efforts to better relations between town and gown.

Living with the students hasn’t been all terrible.

A number of students have made the Claypools’ their second home, watching their dog or visiting for holidays.

“ It’s really nice to be able to see students that I know from campus, and know they’re neighbors, and I can say if you need something, hollar. They come over, and they will come and visit me,” she said. “We have a dog; and I make it known, we’ve got a Greyhound and he needs loving on.”

One particular instance sticks out in Claypool’s mind, though.

The house behind her had been known to have very large, out-of-control parties. One day, some of the house members left long-stemmed yellow roses on the residents’ porches, and attached to fliers with the boys’ faces and names on it, letting their neighbors know they would be partying that weekend.

At the end of the day, perhaps students aren’t the best neighbors, all the time, but each fall on Gordon Street brings with it a promise of anything, from broken bottles to yellow roses, to the tune of the college alma mater.